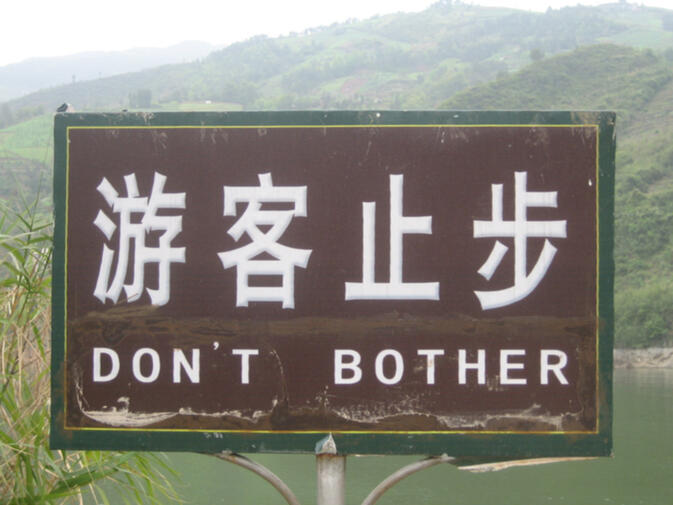 It is everywhere. It has inspired books, plays, photography collections and countless social media posts. It is Chinglish, perhaps the complimentary yinyang opposite to non-native Chinese speakers butchering Chinese tones for their first few years of language study. And now Chinglish — and the misuse of English in general — has come under fire by Beijing.

A new edict concerns the public use of printed English, which has been identified as the "major problem hindering the development of a multilingual society", according to a report by People's Net. Updated rules of usage were published June 20 by both the National Administration of Standardization and the General Administration of Quality Supervision, Inspection and Quarantine.

More than a dozen broad industries will be specifically targeted when the decree goes into effect in December of this year. These include transportation, tourism, entertainment, education, health, telecommunications, business and hospitality, among others. Companies engaged in these sectors are instructed to follow the principles set out in two books, the Public Service Field Guide to English Translation (公共服务领域英文译写指南) and the Standard for English Translation in Public Service (公共服务领域英文译写规范). In general, both primers have the same message, namely that:

English translations should prioritize correct grammar and a proper register, while rare expressions and vocabulary words should be avoided. The standard requires that English not be overused in public sectors, and that translations not contain content that damages the images of China or other countries. Discriminatory and hurtful words have also been banned. The standard provided sample translations for reference, and warned against direct translation.

Together, these two resources contain appendices offering officially approved translations for more than 3,500 common "public service expressions". The next step in the process of English standardization in China falls to the Ministry of Education, which is expected to promote proper use in the name of "helping make cultural exchanges more convenient".

Who will enforce the new regulations on everything from bathroom signage to menus, or what penalties violators may face, has not been elucidated. If similar nationwide mandates — such as the woefully unsuccessful ban on smoking in pubic places — are any indication, notable changes to China's Chinglish 'problem' will be a very long time in coming. 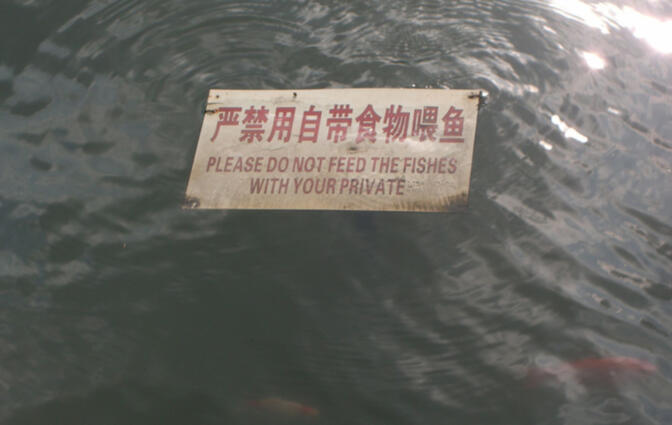 No particular historical justice that everybody's got to learn English these days, but that's the international language we have, and that's why foreigners can get teaching jobs here, as well as in so many other places.

you think they could just show it to a well educated native english speaker like myself to check the English is correct and not too hilarious. A lot of the English I see in the lifts etc seems to have been copied by people who have absolutely no experience of the roman alphabet, they confuse I and l, u and v, a and e, t and f, etc, so they end up typing complete gibberish.

@Haali, I think that's weird too. Note that the English on the sign in the toilets of trains states: "Please flush closet pot" - train cars built & designed many years ago, yet nobody bothered to offer 100rmb or so to some average wandering native-English speaker before they put these signs in virtually every toilet in train car on one of the world's largest RR networks - wtf?
Same syndrome everywhere in China - yet, although I can read and write Chinese, I seriously doubt that I'd design any sign in Chinese characters for exhibition in another country without bothering to find a native Chinese speaker to advise me.
Self-reliance is wonderful.