Kunming residents: By the numbers

The Kunming municipal government has recently released a slew of statistics related to the the city's population breakdown. Here's a brief rundown of some of the stats:

China is often viewed by outsiders as a rather homogenous country, but in fact the Chinese populace is more diverse than it is given credit for. Aside from being home to some of the largest Muslim and Christian populations on the planet, China is also home to 56 officially recognized ethnic groups.

Yunnan boasts the highest ethnic diversity to be found in any of China's administrative regions, with 26 ethnic groups - including the numerically dominant Han majority - scattered throughout the province's diverse landscapes. As capital of Yunnan, Kunming is home to the greatest collection of ethnic diversity to be found in the province. According to municipal population statistics, 759,500 ethnic minorities were registered as Kunming residents in 2006. 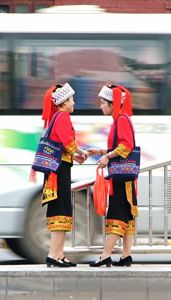 Since its initiation in 1979 China's one-child policy has had a major impact upon the mainland populace, with one of the most notable population trends being an increasingly unequal gender ratio. According to new government statistics, some Chinese provinces are averaging gender ratios as unbalanced as 1.35 males to every female. When compared with much of the rest of China, Kunming has one of the more balanced gender ratios, with a male-to-female ratio of 1.05 to 1.

Although it is nicknamed the Spring City, Kunming is a very urbanized city undergoing massive change. The local government seems to be increasingly focused on increasing green space (绿地) in the city and plans are in motion to create larger parks near the Lianhuachi area northeast of Yunnan Normal University as well as other parts of town.

According to municipal statistics, Kunming's per capita green space now stands at 8.45 square meters - much higher than the national target of 0.95 square meters per capita. This statistic is only inclusive of 'constructed areas' (建成区) of the city, which ostensibly does not take the myriad plots of land under construction throughout the city into account.

Woman preparing to undo attempt on her life - 29 years later

Kunming gets a spring greening

Video: Sounds of the Yunnan Countryside

I want to know the number of western waiguoren registered in the city. It would be interesting to compare that to other minorities!

how many westerners live in kunming? Is this population increasing?
Thanks