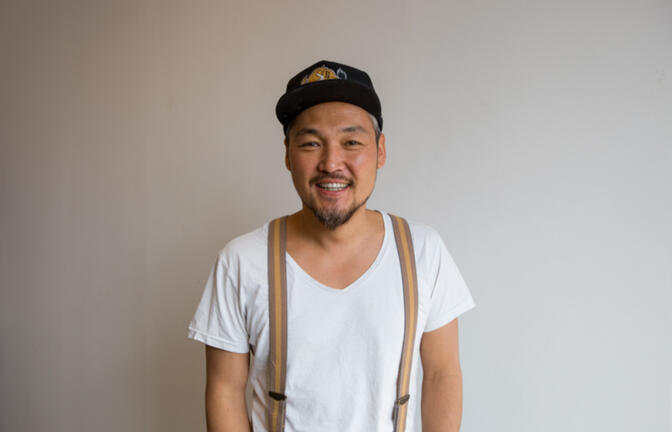 Growing from a micro-brewery into a well-known Chinese craft beer brand with a few international awards in under two years is a hectic business. Selling all over China and signing contracts for export abroad, well that's difficult too.

Swiss-born founder of Shangri-la Highland Craft Brewery, Songtsen 'Sonny' Gyalzur, is a man with an interesting life story that has affected much of what he does and how he does it. He speaks proudly about his mother, and how a trip to visit her in Tibet — where she was operating two orphanages — changed his life. The impetus for starting Shangri-la Beer involved a plan to help his mother with her life work.

GoKunming first caught up with Sonny in 2015 at a point when his brewery in the mountains of northwest Yunnan had just opened. It's pretty amazing how things have changed in such a short time. This time around, we talked more about what drives Sonny and the philosophy behind his business. He also let us in on some secrets, which we're happy to share here.

GoKunming: When you started Shangri-la, how did you envision growing the company knowing China historically lacked a 'beer culture'?

Sonny Gyalzur: When we started with the brewery, the intention was maybe a bit different. I didn't start Shangri-la Beer because I thought I could create a revolution in the Chinese market. It was just because I didn't like to drink Chinese beers. That was in Shangri-la — where we're based — there was no chance to find other beers, only Chinese local beers, and I didn't like to drink those. Out of this problem, I said to myself, "Ok, if I can't find the good beer, than I'll have to do it by myself". So that was the reason, the motivation to start the brewery, and we did it with local ingredients — the water and highland barley. 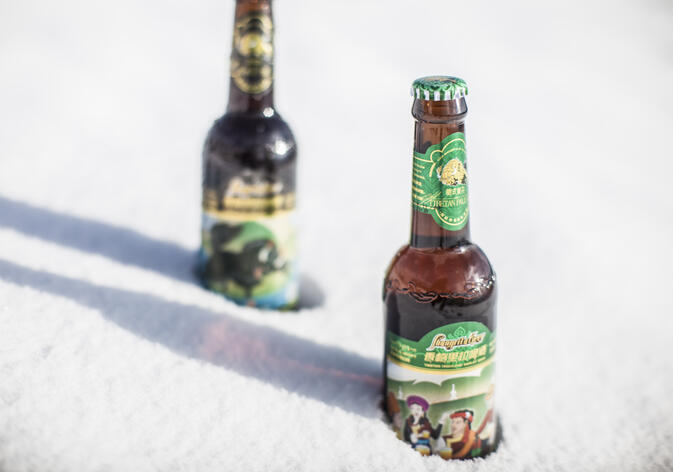 GK: You opened in 2015 with a very large operation but were an unknown entity. How has it been building the brand?

Sonny: At first, we had a micro-brewery, and then the local government came to me and said I wasn't allowed to bottle beer because my operation was too small. If we wanted to continue, we would have to do it according to government regulations. In China, that means your company cannot actually grow organically. You have to have this certain volume of production, which is quite big. At this point it wasn't a hobby anymore and became a business project.

The funny thing with the government is, when I started the brewery project, I was totally naive, and thought they would help me with money and credit and whatever, but I ended up financing everything myself. Their lüdeng — you know, the green light — just meant I had permission to go forward. Only after a ton of hard work — taking government officials to Switzerland to establish a sister-city cooperation and us actually building the brewery — were we able to show them our company was real. Relationships are very important in China, and it took a lot to get that green light. I still dream about that guy telling me we had the lüdeng.

Anyway, we did our research and created a business plan, and we realized that the beer business is also a branding business. We asked ourselves, "Where is the market for us in China?" The big open space was real high-end premium brewing. That was the space where we could grow and define our brand — make a brand DNA. We focused on Tibetan culture, and this is the most important part of our brand, with a special focus on corporate social responsibility and supporting a local orphanage. 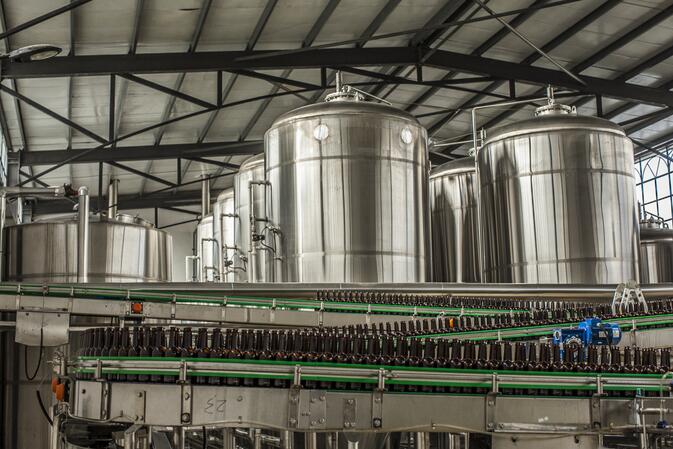 GK: Do you think Shangri-la is helping change attitudes of what a good Chinese beer is?

Sonny: We try our best. Really, what is a good beer? When we started, there was only this industrial lager beer. I come from Europe, from Switzerland, and we have a lot of these family-owned small breweries, and every town has it's own where you can drink so many specialties. I grew up in that culture, I think China deserves something similar. And it's happening. You can see in the market right now craft beer breweries are opening every day in China. There are 200 different styles of beer here now — 400 craft breweries today, when in 2008 there where none. We were used to drinking only one style of beer in China, which is actually not that good. At Shangri-la Beer we hope that we can help this movement.

GK: Do you expect a Chinese micro-brew to break through internationally in the near future?

Sonny: Yes, definitely! I see it already. There is very famous craft brewery in Shanghai called Boxing Cat. Last year at the World Beer Cup they won a silver medal, and we at Shangri-la Brewery won a silver medal at the European Beer Star awards and two others in Brussels. Definitely in the next years we will see even more awards and I think we can go further internationally. The industry is now producing good quality beer here in China. Yes, absolutely no problem.

GK: Shangri-la is now available across China. Do you plan to sell your beers in foreign countries?

Sonny: I think our branding is really strong and we can go international. This is our goal for 2017. We signed a contract with an import company in America, and they start selling our beers next month in San Diego. We will hit the beer competitions in America this year as well. Also, we've already signed contracts in Singapore and Switzerland.

GK: Are you experimenting with new types of beer?

Sonny: Ah, we are experimenting everyday — I'm waking up in the morning with beer on my mind. We are all about new recipes, and new things, most that will never be bottled. But we are brewing and experimenting more or less every day. Right now we have the 'Golden Child'. The Golden Child is a light wheat beer with passion fruit inside, and this is not bottled so far, it's only available as a draught. 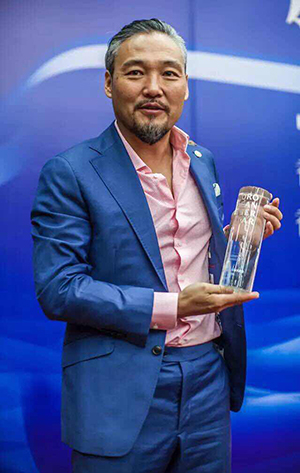 Right now, I'll tell you, we created a beer that will be so unique, we will hit all the big competitions this year and I think that we can win awards with this beer. It's a dark beer — actually a stout — barrel aged, with special wood from the Tibetan highlands. It has a flavor and aroma like sandalwood actually, and this creates an aroma profile which makes it — I mean I drink a lot of craft beer — but I have never seen a beer profile or taste like this. The brew team had tears in our eyes when we drank it the first time. We were super excited and yes, this will be a limited version collection beer for real craft beer lovers. I hope when we go to the competitions this year we can win some awards. That would be awesome.

GK: Earlier you mentioned corporate responsibility. What are the extra things Shangri-la does that you are proud of?

Sonny: Something special about this brewery is that we have a corporate social responsibility program and that doesn't just include the kids from the orphanage. We support local farmers in Shangri-la, and have 1,000 mu under direct contracts with local farmers. They grow us highland barley and we pay a very high price — even higher than our import barley malts. We are helping them to develop quality grains, working with a university in Switzerland to train Shangri-la farmers how they can grow higher quality grains. I think that beer is a local business, and when you want to be in this society, you should try to get all involved. And we are doing it like this.

GK: Can you explain a bit more about the orphanage and your mother's involvement?

Sonny: It's good that you are asking that. My mom is an orphan and grew up in Germany. She is incredibly social and creative, but she has absolutely no idea about money — she doesn't care about it. When I was a kid, she left for one year to find her birth parents in Tibet. She didn't find them, but she came back and told my father she wanted to open an orphanage. He asked her how, and her answer was, "With our money!" [laughs]. This was very difficult for the whole family, but she did it. I know how hard it is to start a project in China today, but 25 years back it was even harder. I'm incredibly proud of her and my father that they could do it.

Now we have an agreement, my mom and me. I take care of all kids who come out of the orphanage and can't find jobs. They have a chance to come to our project, we teach them about brewing, about operating equipment, and they earn good salaries. We have former orphanage kids who work in sales, in administration — actually, the head of administration and the head of production are both from the orphanage. It is amazing what my mom has accomplished, that the kids she helps raise stay in Shangri-la and feel like a part of our brewery family. That's what we are working for, and it's a good thing. 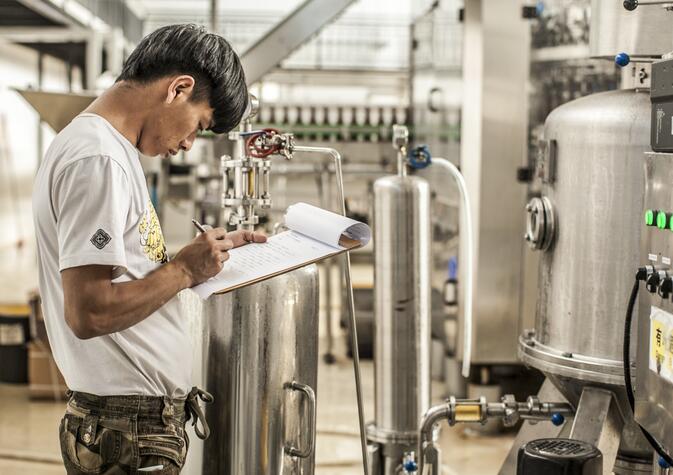 Sonny: I'd just like to say thanks. Thank you very much to all of our clients and patrons for supporting us, and to everybody who gave us such a warm welcome into the city of Shangri-la — including the local government. Because of the support, we are an open brewery where anyone can come visit and see how we do things. We've got tours and beer tasting and stuff like that too. But just thanks so much to everyone for supporting our project!