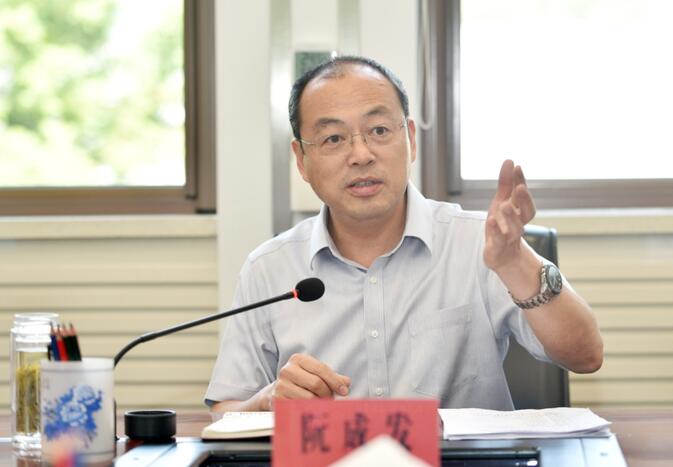 In an era where public figures are recorded, filmed and instantly scrutinized during and after every public appearance, little mistakes have a tendency to set off firestorms. This was definitely the case recently when Ruan Chengfa (阮成发) was caught on tape mispronouncing the name of the province he now governs, multiple times.

Ruan, who was only appointed governor of Yunnan three weeks ago, was giving a televised speech in the run-up to the opening of the Shanghai-Kunming high-speed railway. During a section of the address expounding on the province's historical links to Myanmar, India and the United States, he repeatedly called Yunnan by the wrong name.

Every province and major city in China can be represented by a single character — basically an abbreviation or nickname. For example, Shanghai is shortened to Hu (沪), while the province of Guangdong becomes Yue (粤). In the case of Yunnan, the provincial moniker is shortened to Dian (滇). The name is taken from a small kingdom that ruled much of what is today Yunnan more than 2,000 years ago.

And this is where the governor got into trouble. At least two times during his speech, Ruan said zhen (镇) — which means 'town', among other things, in Chinese — when he instead meant to say Dian. While the characters for the two words are similar, and the mistake possibly attributable to something as simple as a typo, the slip instantly raised hackles across Chinese social media, especially here in Yunnan.

People immediately accused the governor of being disconnected or purposely ignorant. Others went so far as to call for his dismissal and many repeatedly asked the question, "Is there no local official to hold this important office?" This last comment is a reference to Ruan's background, and especially his time as mayor of Wuhan, capital of Hubei province.

Born and educated in central China, Ruan is seen by many Yunnanese as an outsider — even more so following his on-air malapropism. But more generally, the public reaction appears concerned with whether or not the governor is engaged enough at a time when the province is under increasing pressure to project Chinese interests into Southeast Asia while also drastically transforming its economy.

Anger and resentment following these types of gaffes typically fizzles quickly. However, for a man few outside of Hubei had heard of a month ago, the verbal mistake may long be construed as an inauspicious beginning to Ruan's tenure as Yunnan's second most powerful man.

[M]any repeatedly asked the question, "Is there no local official to hold this important office?"

Well most of them are taking a prolonged break, at a government run institute.

Is anyone surprised? From the top down..

Many repeatedly asked the question, "Is there no local official to hold this important office?"

Canada's National Police (RCMP) rotates their officers in new cities and territories every 4 years to avoid corruption.
Maybe it's a thing of the future for China officials.

it is nepotism and cronyism. it is the cronies atacking the outsider. happened before. can lead to impass for needed change if enough inertia in the system. they need to bring in outsiders for other key posts if they want to break through the accumulated dirt

Another year, another province.

August 6, 2021 "Hello , I am Bobby and currently living in Kunming, I have taught as an English teacher for almost 7 years in China and I would be glad if I could get …"
Services Offered ade472