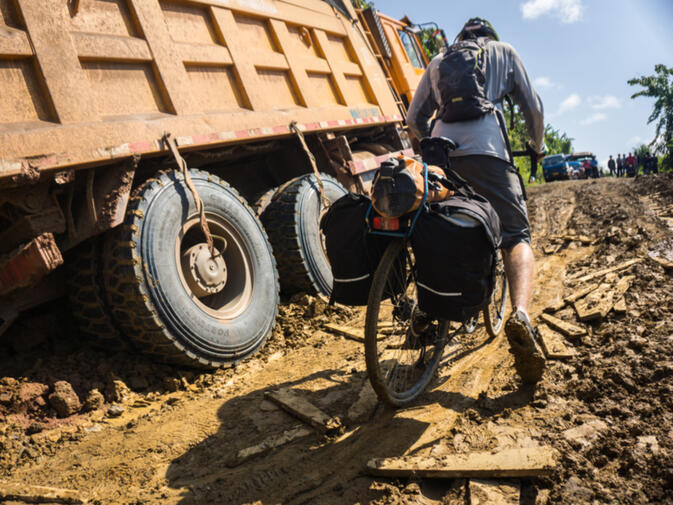 Will wades through the muck that has caught these heavy duty Chinese trucks after a rainstorm in Oudomxay province, Laos (image credit: Kyle Seewald Hemes)

In five or ten years we will come back to this place and zip from Kunming to Luang Prabang in mere hours on the new train. Maybe we will take a houseboat out for a spin on one of the Nam Ou Dam reservoirs, or a zipline from peak to peak. We will be in air-conditioned quarters, and protein will be more readily available. We will warily pay the ticket price or entry fee, which will trickle down from the coffers of whatever communist or nominally democratic government exists, maybe somehow reaching the household of the Hmong folks that were relocated for a massive train tunnel.

For better or worse, the remoteness of Zomia is rapidly being infiltrated by the tendrils of civilization — the very roads on which we cycled. What has been characterized as a semi-autonomous upland region, resistant to the assumptions of 'progress' and 'development' imposed by the lowlands, is faced, as always, with impending change. Fractals of interconnected infrastructure projects — rails, electricity lines, and dams — are emanating from China, Vietnam, and the West, and reaching into Laos' remote uplands. 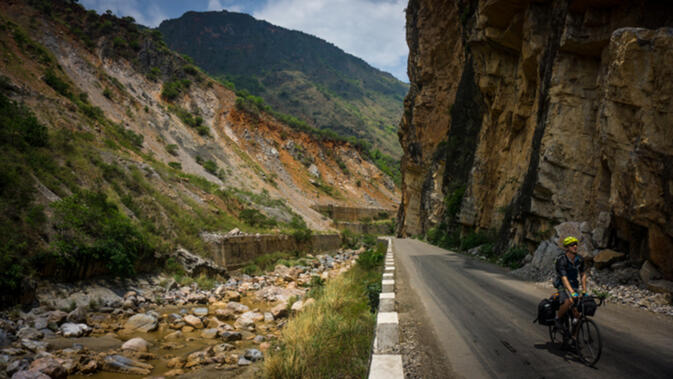 Will cruising between cliff and stream on the long descent to the Red River in Yunnan province, China (photo credit: Kyle Seewald Hemes)

While globalization and big development will surely bring benefits to some, it became clear during our trip that these benefits are rarely equitably distributed, and have the potential to radically change the way people have traditionally subsisted in this fascinating region. We ourselves are products of this lowland — assimilated ideology, extracting images and stories from the rugged mountains to circulate freely in the world economy.

So it begs the question: was it really worth it to bicycle through this landscape, instead of taking the bus, the train, a plane, or just trolling the internet back home for any scraps of information about the region and its people? Retracing our route on the map — Fuxian Lake, Honghe, Jinghong, Luang Namtha, Muang Ngoi — each of these places, and the gnarled black and brown lines connecting them — bring back distinct memories of how slowly we moved through the mountains, each hard-won pass and exhilarating descent. The long periods of monotony, endless uphill climbs, the stench of diesel exhaust. Watching the sun rise over thousand-year old rice terraces or seeing misty cloud forests fading into a harsh sunbaked river canyon. 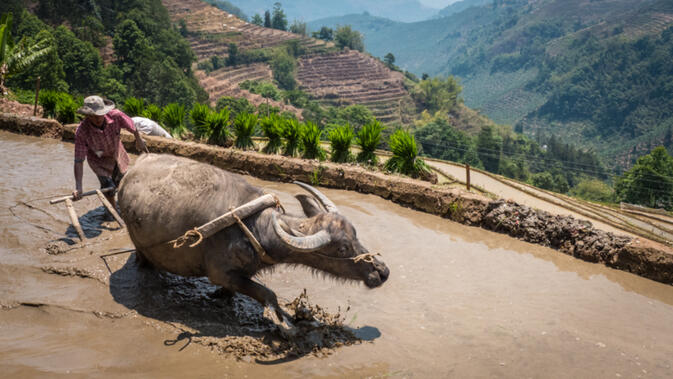 A man plows his rice terrace with a water buffalo in a tributary to the Red River near Shiping, China (photo credit: Stew Motta)

Each place is also now populated, in our minds, with distinct faces staring back. These people morph from the distant statistics slung among news articles and development reports, into real human spirits — vulnerable, excitable, doing the things necessary to get by. If there is hope for the future of the environment and the people that rely on it, it can be found in the process of coming to know and appreciate them intimately. To know the river, to have sat with the people that rely on it, is to know that there is value and vitality beyond the currency contracted in geopolitical economics.

When moving slowly, the lines on a map take on a new, more granular reality. The real Zomia is realized in between the cities and the sights, along the hazy sections of hot dusty road that most motorists snooze through. The friction here, though, is real for so many people. In many places we visited, it will be tough to get to medical attention in the rainy season. 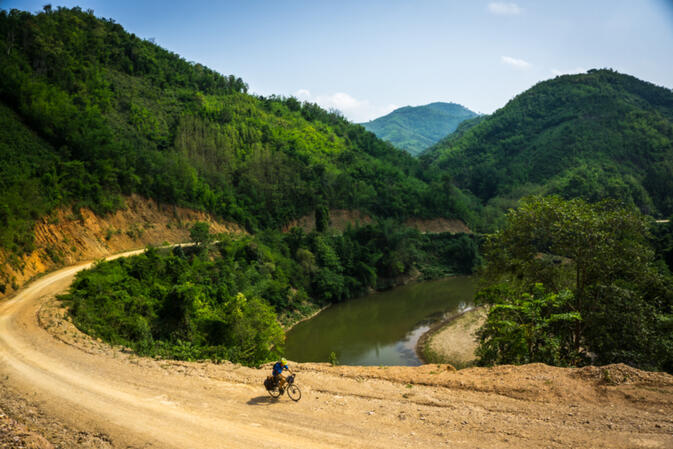 Nearing Luang Prabang, Will pushes up the dirt road along the Xuang River in Laos (photo credit: Kyle Seewald Hemes)

Our friend Daohu's ambitions to teach English are in jeopardy — will his family have enough resources to send him all the way down the hill to study? What will the boat driving family do after their route is dissected by the imminent Nam Ou dams? Trying to comprehend these realities, to find some morsel of shared empathy and understanding in another's human experience — together feeling the friction —seems like reason enough to be out here.

This article is the last in a five-part series about cycling from Kunming to Luang Prabang by Kyle Seewald Hemes and Will Stauffer Norris. The series was originally published on National Geographic Adventure Blog shortly after the authors cycled along or near the route of the proposed Kunming-Singapore Railway. Parts one, two, three and four can be found here. 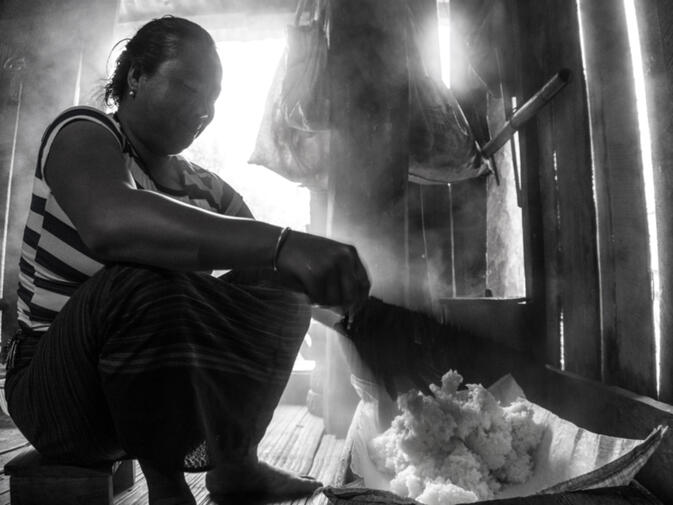 The wife of the village headman prepares fresh, steaming sticky rice for breakfast in Oudomxay province, Laos (photo credit: Simone Phillips)
© Copyright 2005-2021 GoKunming.com all rights reserved. This material may not be republished, rewritten or redistributed without permission.

Thanks for this series.

Zomia is indeed being sliced and diced. For centuries, people have lived out their lives close to the land with success.

Now progress intrudes and a way of life disappears. Money replaces barter, electricity flows and folk are pushed aside. Cheap power and lights for China but little for people of Zomia.