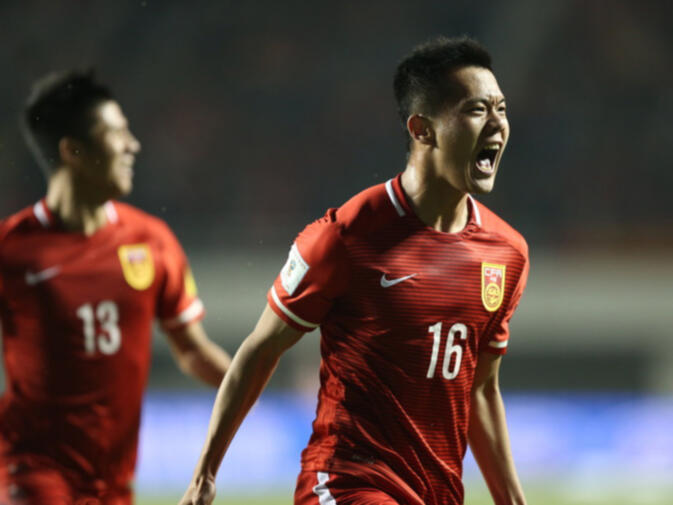 Although the 2018 World Cup in Russia is still nearly two years away, the process of winnowing participating teams down to the final 32 is in full swing. In preparation for qualifying games beginning in September, China's mens national football team is currently training in south Kunming, taking advantage of the city's elevation to enhance player conditioning.

The team will only complete what coach Gao Hongbo (高洪波) has called "short-term training" over the course of one week. Scheduling conflicts necessitated the brief window of time together in the Spring City, as many national team members play in the Chinese Super League (中国足球协会超级联赛), which is currently in the middle of its 30-game regular season.

Players and coaches are meeting each day for strategy and conditioning sessions at Haigeng National Training Center (海埂国际训练中心), a 410,000 square meter facility on the shores of Dianchi Lake. The sports complex has long been a favorite of athletes from across China, as well as from nearby Southeast Asian countries. Olympic athletes including gold-medal-winning swimmer Sun Yang (孙杨) have trained at Haigeng, and in 2007, the venue hosted events associated with the Chinese Disabled Games. For football coach Gao, the decision to use Heigeng is one of convenience:

We chose [to train] in Kunming because during China's hot summer months, the climate here in Yunnan is more suitable. The Haigeng training facility is also pretty far away from Kunming's city center, so it's relatively closed off and quiet.

The next match for the Chinese national team will be held in South Korea on September 6, against Iran. World Cup qualifying for Asia began with 46 teams in 2015. Through rounds one and two, that number has been cut down to only 12. China is now grouped with Iran, Qatar, South Korea, Syria and Uzbekistan for round three, with qualifiers spread out over the next 13 months.

The Chinese side, which qualified for the World Cup for the first and only time in 2002, faces an uphill struggle in the run-up to 2018. The team is currently ranked eighty-first in the world by world governing body Fédération Internationale de Football Association, and questions surrounding the day-to-day running of the team, as well as the general treatment of its players, made headlines this week.

The national squad will continue practicing in Kunming until July 8, before players return to play with their club teams. However, one month later on August 7, they will return to Yunnan to play a tune-up match against Jamaica. That game will be held in Qujing (曲靖), although ticketing and venue information have yet to be released.

"XiJinPing, a football fan, has three wishes for China - to qualify for another World Cup, to host one and to win one."

@Ocean, I really hope those 3 wishes can come true. Qualifying is plausible. FIFA are talking about expanding future finals to 40 teams, which would give China a better chance. I'd love it if China hosted the World Cup, the sooner the better! Winning it wont be realistic for another 15 years or so (for the men at least - the women are excellent).

If Brazil with all it's problems can host, no reason China can't. More than enough rabid Chinese football fans, though they are probably only going to cheer for two teams, home and Germany.

I predict that Chinas turn for the World Cup will be in 2026. Until then their National Team will hopefully be less corrupt. (I mean: out of 1.3 billion people they can't find 11 good players....??) So far the only things they copied from other countries football leagues is the spitting, complaining and the "rolling endlessly on the ground" after a foul. However, I am confident that China will have a competitive team by 2026!

i think they also trained with the national diving team