Seeing beyond the visible: Gender and peace-building in Myanmar 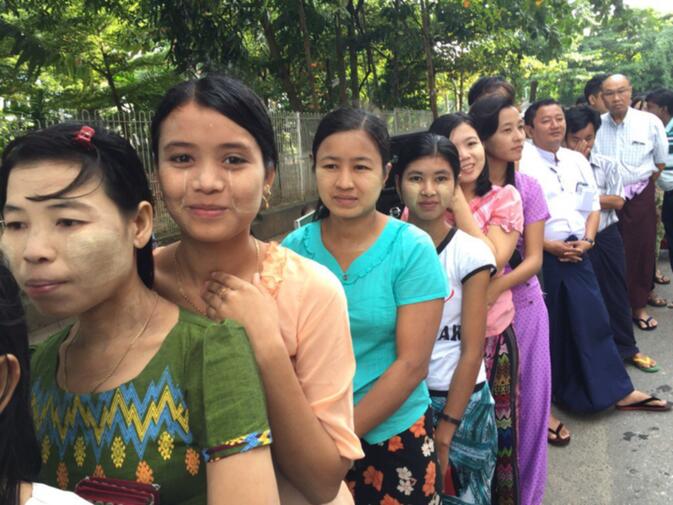 Peace-building practitioners in Myanmar should re-orient the way we look at peace and conflict processes by viewing them through the experiences of women. Applying a gender lens to Myanmar's peace process — which is largely dominated by male elites and leaves out the voices of ethnic communities — will reveal a more complete picture of the strategies being enacted by civil society actors to mitigate the effects of armed conflict. This, in turn, could inform policies that are more likely to generate productive results.

Since the advent of Myanmar's transition to democracy in 2012, bringing peace to conflict-ridden ethnic areas has become a focus for actors engaged in the country's development. Western governments, including the United States', hailed the signing of the Nationwide Ceasefire Agreement in 2015 by a handful of ethnic armed organizations as an important, albeit nascent step toward the end of decades-long civil unrest. In addition, development practitioners at the national level have begun implementing peace-building initiatives of their own.

Much of this work is being done against a backdrop of caution — conflicts in Kachin and Shan, two of Myanmar's largest states, have left more than 120,000 civilians displaced in the last five years alone, making optimism about peace seem premature. Additionally, the presence of a plethora of international 'experts' in this space has led to criticism on the goals of the peace-building agenda. Development practitioners, well-aware of these cautions, continue to hope that the recently-elected National League for Democracy (NLD) government will usher in a new era of nationwide reconciliation, making Myanmar an exemplary case study for conflict practitioners around the world.

Despite this optimism, however, the lens through which many practitioners look at peace-building in Myanmar remains incomplete. In the rush to implement solutions, gender, a crucial factor in understanding the effects of armed conflict, is often left out of key programming and policy initiatives. This is compounded by the fact that in national-level peace negotiations, women — and especially ethnic women — are rarely allowed a voice.

Research has shown that beyond simply being a call for diversity, there are concrete benefits to integrating gender-sensitivity into development work. These include sustainability of programming and, in post-conflict situations, an increased likelihood of prolonged peace. Therefore, rather than creating programs that are 'gender blind', practitioners should put gender at the center of the peace-building conversation. Seeing peace and conflict from 'below' will provide a more complete picture of what is happening on the ground, thus informing the creation of more productive policies.

The limits of visibility

Actors who call for applying a gender lens to Myanmar's peace process unanimously suggest that women's circumstances in Myanmar will improve when the numbers of women in public life increase. Gender inclusion, representation and participation have surfaced as focal points in these discussions, with a host of civil society women's organizations shedding much-needed light on the lack of women's participation in formal peace negotiations. Instilling a gender lens onto governance, particularly during the advent of the Aung San Suu Kyi-led NLD, these groups suggest, is paramount to advancing Myanmar's peace agenda. More women in power, the argument goes, will lead to sustainable peace in Myanmar.

As important as this argument is, I suggest that it is incomplete. Incorporating women into pre-existing structures of power, while arguably beneficial, can also replicate hierarchies dominated by elites, leaving out the experiences of ordinary women. The sheer accomplishment of instilling more women in political office does not tell us, for example, how gendered cultural practices are supported by, or lead to the exacerbation of, armed conflict. It does not tell us how certain women become authorized to take on leadership roles, while other women lack even the most basic understanding of gender equality. We don't yet understand how gender dynamics at the village level authorize wars to remain entrenched, or how resistance to war and refuting gender stereotypes go hand in hand. Issues of access and power are as much a part of 'gendering' peace as are questions of women's visibility.

Development practitioners should widen the lens to look at places where gender and power intersect. This can be done by looking to the ground and examining cultural spaces where women are seemingly invisible — at the village level, in grassroots civil society, and in peace-building organizations themselves. We must ask how gender dynamics in these spaces inform social inequalities, keep women at a disadvantage, and cement the roots of conflict.

One example of an area that can help us better understand the intersections of gender, conflict and peace, is civilian ceasefire monitoring. In recent years, ethnic peace-building practitioners have begun implementing a new approach to monitoring the fragile ceasefire agreements between ethnic armed organizations and the Union of Myanmar Government. Civilian Ceasefire Monitoring, or CCM, began as an answer to the failed United Nations (UN) model of armed civilian protection in contexts such as Rwanda, Bosnia and Somalia throughout the 1990s.

It differs from other peace-building approaches in that it engages the direct participation of communities working on the ground, rather than relying on 'outside' actors — such as the UN — to monitor conflict. In the CCM approach, villagers themselves are trained to understand the ceasefire agreements in place, and monitor incidents that breach those agreements. Often included in this work is "unarmed civilian protection monitoring", which engages villagers' participation in reporting on broader human rights violations, such as land-grabbing or sexual assault. Notably, civilian ceasefire monitors must remain neutral in their efforts — making a commitment to align with neither side of an armed conflict. They also, by definition, must remain unarmed.

Civilian ceasefire monitoring mechanisms in Myanmar are diverse in their practices, goals and capacities. While some draw from previous experiences monitoring conflict in their regions, others are only beginning to develop the tools and knowledge necessary to achieve their goals. Overall though, the mechanisms are aligned in their mission to actively monitor violations that persist in ethnic conflict areas.

Recently, I conducted preliminary research for Mercy Corps Myanmar's Supporting Civilian Ceasefire Monitoring program on the gender dynamics of civilian ceasefire monitoring in the country. The research assessed CCM mechanisms in six ethnic states, where over two-hundred-and–forty-four monitors are working in twenty-four villages and townships.

The research took place in Kayah, a small state in eastern Myanmar that has suffered from decades of conflict with the Union of Myanmar (UOM) government, and where weak infrastructure and food insecurity remain rampant; Kachin, home to the Kachin Independence Organization, which has been entrenched in armed conflict since 2011, resulting in the internal displacement of over one-hundred-and-twenty thousand civilians; Chin, a remote, isolated area of Western Myanmar with scant natural resources and little infrastructure, as well as one of the poorest regions in the country; Shan, a state which has suffered from decades of civil conflict and reports the highest levels sexual violence in armed conflict; Kayin, or Karen, where land confiscation, natural resource extraction, and foreign-led development projects are ongoing concerns of citizens, with armed actors often implicated as perpetrators; and Mon, whose governing body, the New Mon State Party (NMSP) abstained from signing the NCA out of protest around its non-inclusiveness of other armed ethnic organizations.

Our team conducted interviews with ten men and eight women, in an attempt to understand the practices of CCM mechanisms in these areas, and what role gender inclusion and omission might play in their work.

By contrast, mechanisms in Kachin, Kayah, and Chin demonstrated comparably less commitment to including women in their processes. It can be argued that this, in turn, affected the overall functionality of the mechanism. Women from these networks reported being silenced in meetings, excluded from decision-making and discouraged from working as monitors. This negative feedback, they explained, came from the community, their families and male members of the mechanisms.

In addition, the findings revealed that gender issues inform the way a mechanism approaches its ceasefire monitoring mandate — specifically, whether to monitor a given bilateral or nationwide ceasefire agreement, or whether to monitor issues of civilian protection, for example, human rights abuses within the community. Women, we found, consistently requested that their mechanisms attend to problems of sexual violence in conflict, domestic abuse, land-grabbing, and other issues of importance to women at the village level. These issues are, of course, pertinent to all members of a community, not just women. However, it was often women who brought them to the forefront of the discussion.

Above all, the research found that seeing the work of civilian ceasefire monitors through a gender lens helps us understand the way these mechanisms function, the strategies they undertake and the challenges they face. Conversely, by not including a gender lens, we risk negating half of the conversation.

There are numerous other ways in which the 'how' and 'where' of gendering peace and development practice can intersect. Research on women and customary law, women's forced labor — for example, trafficking, which I have discussed here — and issues of gender and ethnic nationalism could reveal how peace and conflict processes are informed by women's experiences. These spaces, though not directly related to women's participation in public life, are nevertheless worth examining.

As development practitioners, we should ask deeper questions about how peace-building can be more inclusive of, and responsive to, women's needs. Changing the dynamics of firmly entrenched systems of power is not simply a matter of quotas. When we think about gender and peace in Myanmar, how we look is important as where we look. Viewing peace-building from 'below' helps us see places where gender neutrality is often assumed, rendering women's experiences invisible. By probing these spaces, we create a new type of visibility — one in which the structures of power that keep women at a disadvantage can finally be laid bare.

Editor's note: This article was originally published on website East by Southeast. It is the first in a three-part series by author Erin Kamler on gender, peace-building, and development in Myanmar. Parts two and three will be published next week.

Good article. Note also the lack of peace in Muslim areas near the Bangla Deshi border, the population of which has suffered considerable violence over the past 4-5 years or so. Hard to say that peace-building has been going on there.