A conversation with brewer and pub owner 'Uncle John' 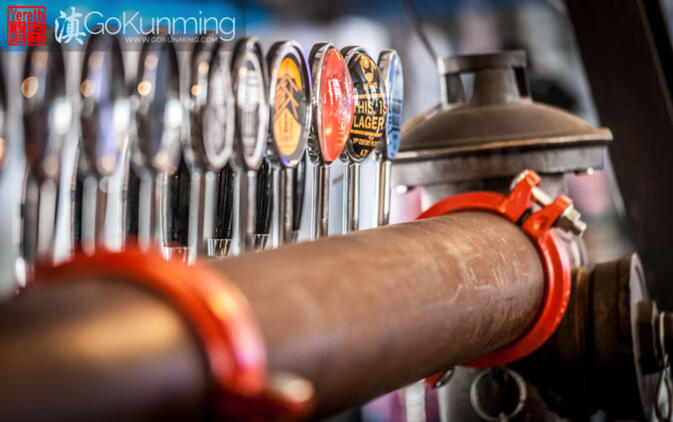 Yue Han (约翰) aka 'Uncle John', is originally from Inner Mongolia, but moved to Kunming after quitting his job to dedicate time to his greatest passion, brewing beer. After practicing at home for four years, he found a suitable spot for his beer-making workshop inside a disused space once occupied by the Kunming Electronic Equipment Factory (昆明电器厂).

A few weeks ago, Uncle John's The Brew Pub (约翰叔叔的啤酒教堂) opened to the public. The venue is located in the eastern part of the city, just inside the second ring road. It features a spacious indoor area as well as a smaller outdoor beer garden. A glass wall separates the brewing room from the actual pub, and guests can observe the process directly. A full range of home-brewed beers waits on tap, including the pub's signature Kunming Pale Ale, Belgian wheat, hefeweizen, stout, pilsner, Hua Mei Cider and many more. The kitchen features a teppanyaki grill, but also offers a variety of Western and Chinese food options.

GoKunming recently sat down with Uncle John to talk about his passion for beer, brewing, and how it all started. 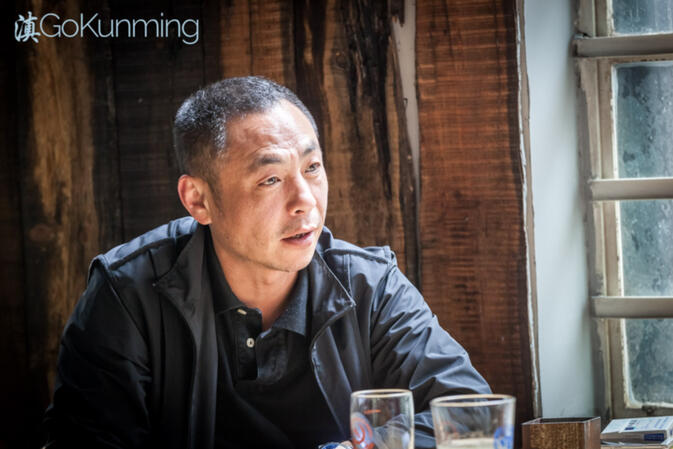 GoKunming: Is this the first time you've opened a pub?

Yue Han: Of course! But I've been thinking about it since the 1990s. When I was still a university student, one day I had to give a speech in English, and talked about my dream of running a bar — a place where people could sit down, listen to music, relax, take it easy and tell me their stories. My teacher really liked it and encouraged me to pursue my dream. Back then, China was just starting the opening-up process, and we didn't have such things as bars!

After graduating, I started working for a German company, and one of my colleagues, Wolfgang, introduced me to beer. I mean to real beer! I still remember asking him what he thought of Chinese beer, and he said, "Water!".

Later, I decided to quit my job and move to Kunming. So, for the last four years I've dedicated all my time and energy to brewing — studying, researching and practicing at home. I knew this was going to be my new life and I couldn't do anything else. At the beginning the results weren't always good enough...but I persevered and slowly it worked. I am really thankful to my wife, who supported me the entire time. She has also helped me brewing, and her contributions have been invaluable.

As a practicing Buddhist, I believe everybody was born to do something in life. To me, this project has been sort of a life duty. I want to help spread beer and brewing culture in China, to everybody, regardless if they are Chinese or foreign. 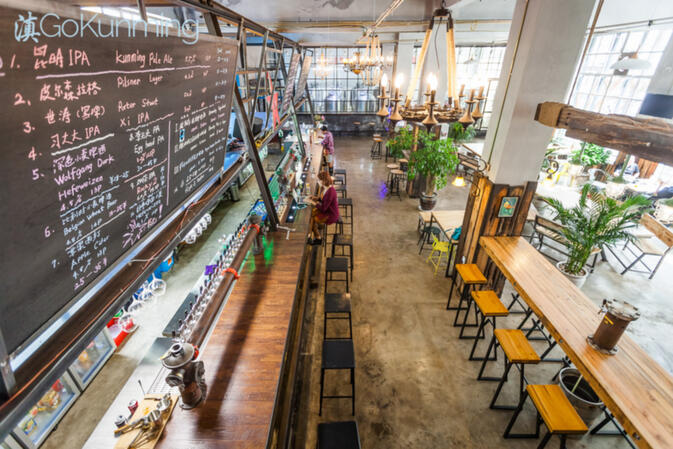 GK: Why did you choose this location and how long did it take to get it up and running?

Yue: A year ago I started looking for a place to rent. I needed something cheap, where I could build a workshop first and experiment more, without the financial pressure of having to open it to the public immediately. Also, I needed a space big enough to fit both a pub and a brewery — the right setting, with both an indoor and an outdoor area.

GK: What has the process of setting up been like?

Yue: It has been a very long and complicated process, mainly because craft beer is relatively new in China, and therefore the rules and regulations keep changing. The most challenging part has been setting up a kitchen and obtaining all the required permits. 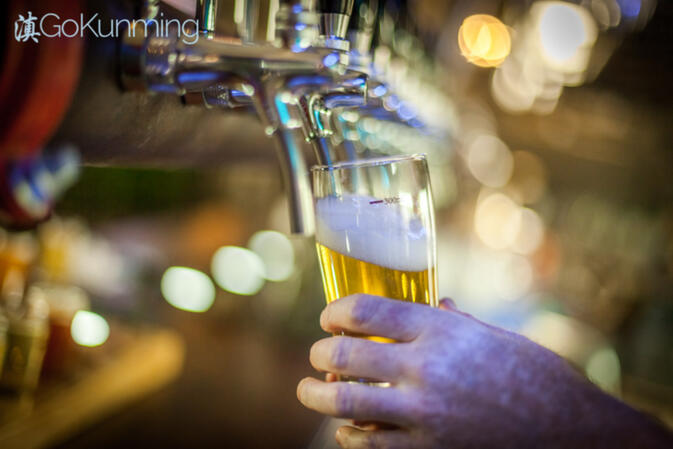 GK: Are you involved in local or national brewers clubs?

Last year I drove across the country and visited many bars and breweries in Beijing and Guangzhou. I established a good relationship with the owners and we exchanged ideas. I am happy that more and more people in China understand craft beer. What's good is that more money has been invested, but what's bad is that 90 percent of the people who are investing in breweries don't know much about the actual craft. They are just following a trend. Brewing beer is not easy, and to make the business last, you need a lot of time, knowledge and attention. To some people, it's just another investment. I think this [way of thinking] is very dangerous. 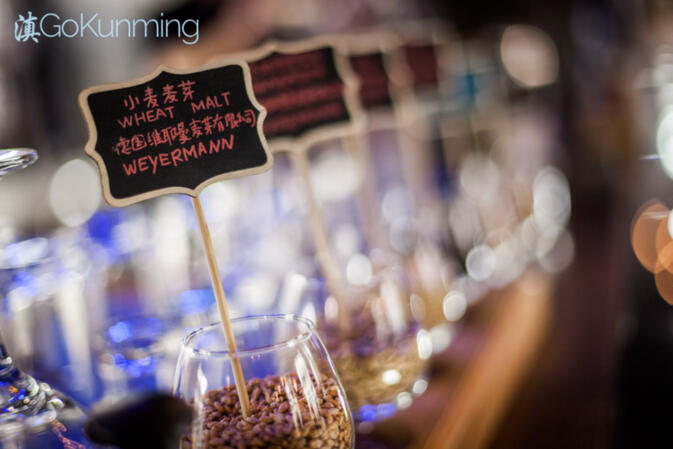 GK: Do you ever experiment with odd ingredients or processes?

Yue: I'm not really interested in experimenting with strange ingredients. For four years, I practiced brewing the same kind of beers at home, every week, once a week, until I finally got there. I had my friends over to my place and let them try both a glass of imported beer and another of the same type of my homebrew so that they could compare them. Beer doesn't have to be imported to be good, and more people need to understand this.

I don't really experiment because first you have to learn how to make standard beers. That takes a long time. Only after many years will you be able to experiment and create something new. Beer has hundreds of years of history, and there's a reason why the main ingredients haven't changed — it's still water, yeast, hops and malt. 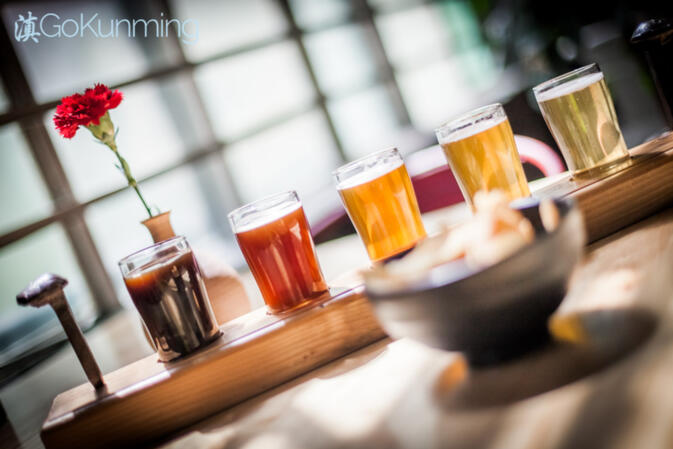 GK: Can you recommend some good beer and food pairings?

Yue: In the past, we used to eat different foods at different times of the year. So, rather than pairing up food and beer, my advice is to choose your beer according to the season. A sweeter one in spring, a lager or a hefeweizen in summer, a fruity or bitter one in autumn such as IPA — which pairs well with lamb or beef — and a stronger one, such as a Belgian abby in winter, because the higher alcoholic level will help you warm up!

GK: What kind of beer is most popular among Chinese customers? 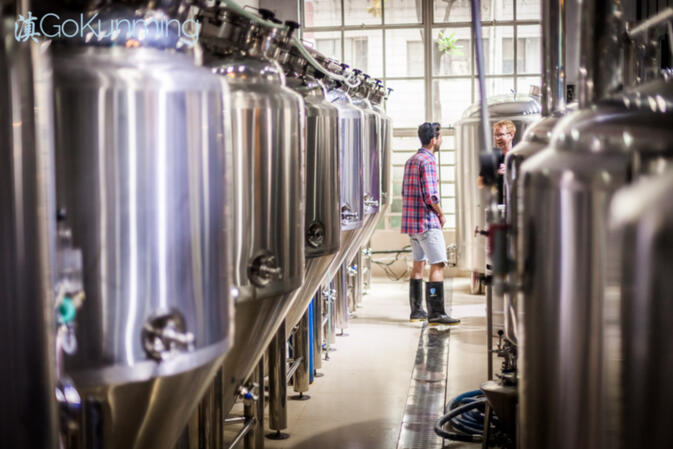 GK: China has already become the world's largest beer market, and the popularity of craft-beer culture is growing. Do you think it will continue to expand?

Yue: To be honest, I don't think so. In China, everything passes so quickly. Too many things have happened in the past thirty years. Everyday something else changes, and many things have already disappeared. For example, one year everyone was buying Brandy, then everybody was into Whiskey, then French wine. Now these fads are all fading.

These days, many businessmen are investing a lot of money into craft beer, but I think the market is not ready. So maybe, in a couple of years, they will move on to something different. To many people, it's just another business and not about passion or knowledge. 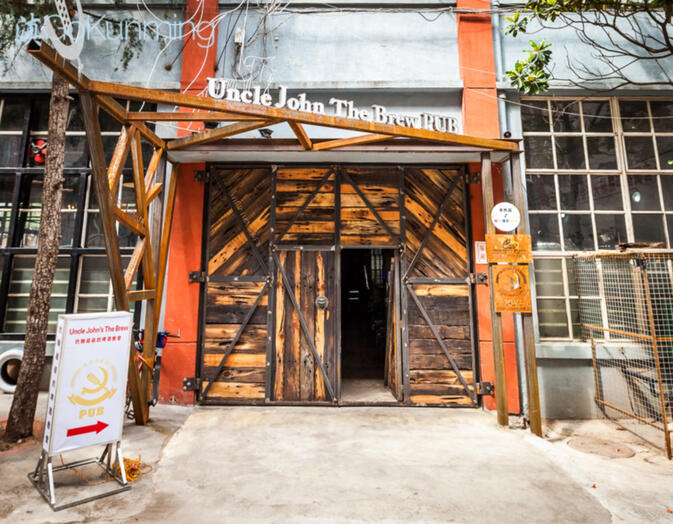 Yue: Can you guess? I don't have one [laughs]. Beer is like a work of art — it never looks perfect to the person who creates it. I want to keep improving, that's why I will always keep brewing. Sometimes, I am very satisfied, but then nobody else likes it. Or the opposite happens — in my opinion it came out just so-so, but everyone enjoys it. There is so much more to learn. Back to my old good friend Wolfgang, he also taught me that nobody is perfect, and beer is exactly the same. We try to make each kind of beer as best as we can, each in its own specific way.

GK: A few other breweries have opened up in Kunming over the past few months. What makes this venue different from them?

Yue: Nothing, just myself! [laughs] Everyday, I encourage myself to do better.
We only use imported malt from Germany and hops from the United States. They are more expensive, but I believe that using good ingredients is very important. Even a master brewer can't craft a great beer without quality ingredients. Also, you cannot make good beer without studying for a long time, researching the ingredients and knowing the brewing process — knowing the background and history. Young people have the energy but not the patience. I'm different. I am not so young anymore [laughs], but I have a lot of patience. 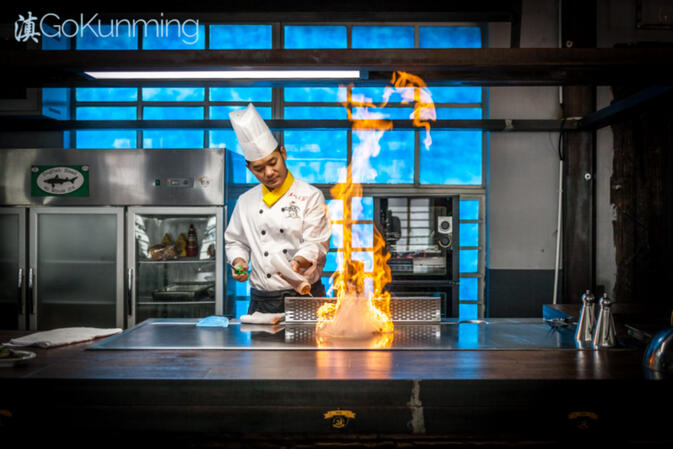 Awesome. I'm so there.

Great interview. And before people bitch about directions and such, click on the listing link in the article. Here it is again, though html doesn't hyperlink in comments.

Or does it now, lol.

Does anyone know his ballpark prices?

look at the chalkboard pic tiger

I did, but my eyes aren't that good.

Good prices - ranging from ¥25-¥40 for a pint of house brew if I recall. More expensive for the imported beers. And they have special deals & events etc.

hope there will be more guys like him in KM. cant wait to go for a pint and pay normal price. 25 is still to high for me:-( .