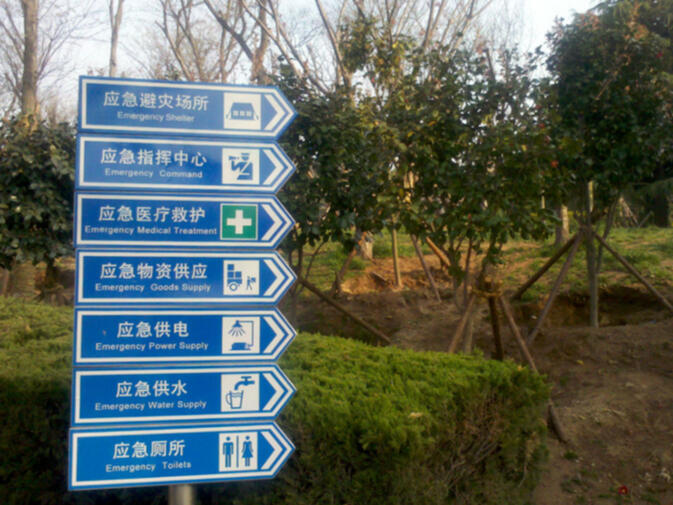 Recent earthquakes in Afghanistan, Myanmar and Japan have sparked conversations across China as to whether or not the Middle Kingdom is due for its own tremor. While experts downplay current risks, such concerns do raise an interesting question for those of us living in Kunming: Is the Spring City prepared?

The answer for many may be surprising. Although the municipal government has spent large amounts money over the past decade constructing more than 200 "earthquake shelters" across the city, few know of their existence. General ignorance is due mostly to lack of publicity, as well as most of the safe havens existing in plain sight.

In an effort to raise awareness, the Kunming Bureau of Earthquake Disaster Mitigation (昆明市防震减灾局) is increasing efforts to properly mark designated safe areas with hard-to-miss signs and directions. The majority of the shelters are in fact public parks, squares and schoolyards — logical outdoor places where large amounts of people could gather in times of emergency.

A city-wide plan began to take shape as early as 2007, but was not actually put into action until 2011. Five hundred thousand yuan was then allocated for two pilot shelters, one at Baohai Park (宝海公园) in the city's south, and the other in the northern Yueyatang area (月牙塘小区). Both were eventually stocked with emergency stores of water, portable toilets, electric generators, portable cots, blankets and other necessities.

The shelter program has grown to encompass 220 locations, many of them reportedly small, only mildly equipped, and able to accommodate a few thousand people. However, the Baohai site is said to be able to assist 50,000 if a strong earthquake were to hit Kunming. In such an emergency, Jinbi Square (金碧公园) in the city center could aid an estimated 30,000 people.

Making emergency contingency plans public has not necessarily been a point of emphasis in the past, as a complete list of shelters appears to be unavailable. However, a quick guide from 2014 to many of the larger safe areas from is available at the website Kunming Harbor. Additionally, a guide to what to do before, during and after a major earthquake can be found here.

Despite recent publicity surrounding the Kunming emergency shelter initiative, Chinese seismologists do not believe a major tremor in Yunnan is likely any time soon. Pan Huaiwen (潘怀文), Director of the China Earthquake Networks Center, said at a recent press conference that he believes recent temblors in neighboring countries do not "indicate that China faces a strong earthquake soon as well".

Yunnan suffered its most intense and devastating earthquake in 1833, when an estimated magnitude-eight tremor struck along the Xiaojiang Fault (小江断裂带) near Songming, killing tens of thousands of people. Such an event is most likely not in Kunming's near future — although emergency shelter planning for a temblor of any size is welcome news — as seismologists believe the recurrence rate for an earthquake equal to the one in 1833 is at least 2,000 years.

in the earthquake follow the stampede to your nearest shelter. safest place to be?

They sounds less like shelters but more like gathering or concentration hot spots for after the earthquake. For the few people surviving collapsing buildings due to bad constuctions.

I heard there is only one building, made to whitstand a magnitude. The Fudian Bank building at zhenyi fang. Code dictates to build quake safe houses but they are more expensive, so many construction companies choose to bribe over using more steel. Like 2008 in Sichuan.

Don't know if I'd bother, after surviving the collapse of our house, to walk a few kilometers to see other people being equally ignored by emergency services.
I can't imagine how Kunming would handle an earthquake, remembering the fog disaster at the airport . lol

Only the schools collapsed in Sichuan.

Some of the signs have great Chinglish on closer inspection

Where? They all seem to make sense (dissatisfyingly enough). At least the ones in the photo.

@Alex Sorry, not this photo but others around.