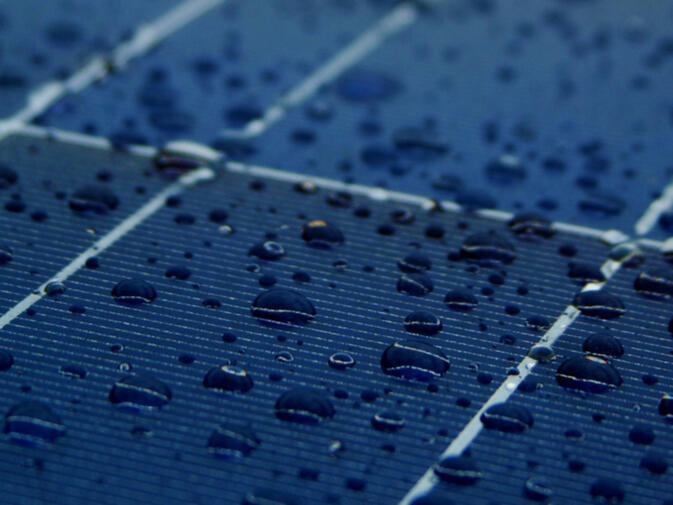 Innovative experiments carried out in part by researchers in Yunnan may revolutionize the efficiency and adaptability of solar cells. In a paper published last week in the German scientific journal Angewandte Chemie, Chinese engineers announced they have developed the world's first "all-weather" photovoltaic cells.

Scientists working at the Ocean University of China (海大) in Qingdao and Yunnan Normal University (云南师范大学) in Kunming have developed multi-purpose solar cells that can generate and collect energy even in a storm. In fact, the new technology is capable of harvesting electricity specifically from falling raindrops. The promising new application utilizes carbon-based graphene and, if perfected, could bring solar electric technology into a new era.

Led by Professor of solar energy and nanotechnology Tang Qunwei, the research teams in Qingdao and Kunming coated the surface of existing solar cells with a one-atom thick layer of graphene. The molecule, in addition to being 100 times stronger than steal, conducts heat and electricity well. Additionally, graphene is nearly transparent, meaning its presence has little negative effect on solar power generation during periods of sunshine.

It is when rain threatens that the addition of the electron-enriched graphene layer shows its merit. When droplets of water strike the newly coated solar panels, a simple chemical reaction involving ionic salt compounds occurs. Graphene helps harness that reaction and, according to a helpful layman's explanation written in Science News Journal:

The salt contained in rain separates into ions (ammonium, calcium and sodium), making graphene and natural water a great combination for creating energy. The water actually clings to the graphene, forming a dual layer (AKA pseudocapacitor) with the graphene electrons. The energy difference between these layers is so strong that it generates electricity.

The energy captured by the new all-weather cells remains fairly low, but is nonetheless an encouraging development that may one day negate the largest shortcoming of solar power generators — inactivity during inclement weather. A spokesman for the teams who created the process are certainly optimistic, saying, "All-weather solar cells are promising in solving the [world's] energy crisis".

Great idea, hope it turns out to be practical.

If this had been posted two weeks earlier I would have laughed out loud.