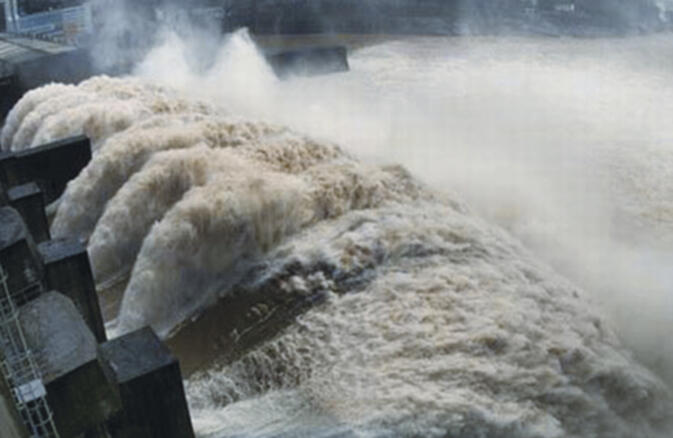 A widespread drought in several Southeast Asian countries is wreaking havoc on agricultural land and peoples' lives. In response, the Chinese Foreign Ministry announced this week it will conduct an emergency discharge from a Yunnan dam across the Mekong River for most of the next month. It is hoped the release will lessen water shortages in countries downstream.

Speaking at a March 15 press conference, Foreign Ministry spokesman Lu Kang (陆康) confirmed water from the Jinghong Hydropower Station (景洪水电站) will be released from now until April 10, and will, in his words, "benefit Cambodia, Laos, Myanmar, Thailand and Vietnam". In his remarks, Kang stressed that China and the countries of the Lower Mekong Basin retain amicable relations despite recent tensions, saying:

China and Mekong River countries on the Indochina Peninsula are friendly neighbors. People living along the Lancang-Mekong River are nourished by the same river. It goes without saying that friends should help each other when help is needed. Since the end of 2015, due to El Niño...countries along the Lancang-Mekong River have sustained drought of different degrees, and their people's life and work have been impacted as the drought keeps getting worse. In order to help those countries cope with the drought, the Chinese government decided to surmount the difficulties it faces and do its utmost to help.

On average, the Jinghong dam across the Mekong — known inside China as the Lancang River (澜沧江) — releases 1,000 cubic meters of water each second. That number has now been doubled, and will remain elevated until mid-April, by which time Southeast Asia's spring dry season has typically subsided.

In some areas of Vietnam, the current drought has been characterized as the worst dry-spell in a century. In the country's delta region, some 1,390 square kilometers of rice paddies have so far been damaged or destroyed by a combination of drought and salt water intrusion as the Mekong River continues to shrink. Such conditions seriously threaten Vietnam's economy, as well as the livelihoods of the 14 million people who cultivate rice along the delta.

Other countries downstream are also suffering. Thailand is reportedly facing its worst water shortages in two decades. In Bangkok, this means the upcoming new year festival Songkran has been shortened from four days to three and a curfew imposed. The city's deputy mayor, Amorn Kijchawengjul, told Reuters, "This is partly symbolic, but we hope to save water too because our lakes have become deserts."

The water release in Jinghong, while providing at least some relief from months of drought, can also be seen as a necessary act of goodwill. The water crisis in Southeast Asia has been blamed largely on climate change strengthened weather phenomenon El Niño. And while rising global temperatures are indeed an enormous issue, so too is how and if China and Association of Southeast Asian Nations member countries work together to preserve and protect the world's twelfth longest river.

And what's wrong with the world being warmer anyway? People are moving to warmer climates all the time. The places that had coldest winters on record last/this year will certainly be hoping for a warmer period. Adapting to climate change shouldn't need to be that expensive or scary. When the ice on the river Thames used to form so hard between the 17th and 19th centuries, people weren't saying they were all going die if they didn't change their lifestyles. They had frost fairs on ice. Today's warnings on climate change are at biblical proportions and only being used as the idea of hell is losing its hold. In fact the average climate is manipulated by the sun's heat intensity at the time and the orbital position of the earth in relation to the sun which does change over long periods, during which humans were not around for the most dramatic changes. You can also argue that the hotter the sun, the warmer the earth, hence more C02. Proof of major climate change over millions of years all around us, stone forest for example. Try and get the picture of the large chunks of ice collapsing into the ocean during the SUMMER and the polar bear standing hopelessly on the last small block of ice on earth out of your mind. If you were right, the artic cap would be totally gone by now as the use of fossil fuels has been constantly increasing since the idea of climate change by human error came into existance. And from NASA. The largest amount of ice in antartica since 1979, yes, in 37 years. How much fossuil fuel has been burnt since then I wonder. A lot more than the numerous previous ice and warming ages. It's been unpredictable for the past few billion years. Putting the majority of attention and money on agenda focused, tax rising, control grabbing schemes is not working. To save ourselves from natural climatic conditions beyond our control we must turn our attention to how best we can protect ourselves against it because if we are honest to ourselves we will never be able control or prevent extreme weather conditions in our lifetimes.

@Lemon: I take it you are not a Vietnamese farmer.
Seems to me the river, and other international rivers, should be managed in some manner that is democratic (taking demography into consideration) and compulsory for all who share its waters.

@Alien.
The above was just a compilation of entries from vicar in an other discussion.

I already contributed his blabla in reaction to the sentence: "The water crisis in Southeast Asia has been blamed largely on climate change strengthened weather phenomenon El Niño." Just trolling a bit.
Indeed I am not a Vietnamese farmer.

I should not be trolling because this is indeed serious business.

Maybe you should look into how dams cause drought first lemon love?

Nice for the motherland to share some of the water it is hoarding for itself in the first place.

Zhudan's implied point. Probably has to do with the high amount of precipitation this winter in Yunnan?

Note that virtually the entire length of the lower Mekong in China from Jinghong to Guanlei and the border has been replaced with water-sapping rubber plantations, which probably do not help the situation. Of course, now that rubber's price has dropped precipitously, and the original forests lost forever, the locals are realizing their mistake as cheaper workers in Laos and elsewhere fill the minimal demand and Chinese rubber remains largely stagnant and untapped.