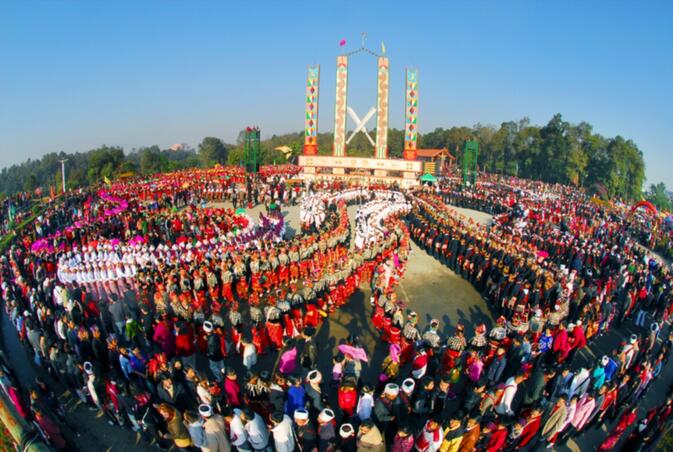 Today, February 22, Lantern Festival (元宵节) is celebrated throughout China. The holiday represents the end of Spring Festival, and is observed on the fifteenth day of the first lunar month. People, and especially children, across the country will solve riddles written on lanterns, in a tradition called caidengmi (猜灯谜). Lantern Festival is replete with other, more ancient customs, and here in Yunnan minority ceremonies and rituals held concurrently come heavily spiced with their own ancestral conventions.

One such event is being held now in southwest Yunnan's Dehong Prefecture (德宏) and is called Munao zhongge (目瑙纵歌节). It is a tradition of the Jingpo people (景颇), and involves copious amounts of singing and dancing by performers decked-out in traditional finery. Much like Spring Festival, the holiday celebrates the end of winter and the anticipation of a successful planting season leading to a bountiful harvest.

The culminating highlight of the festival is the munao zhongge dance, an enormous choreographed affair featuring a snaking line of thousands of participants in a public square. Referred to in local media as the 'Dance of 10,000 People' (万人舞), the largest such performances are accompanied by huge traditional Jingpo drums and flute music. 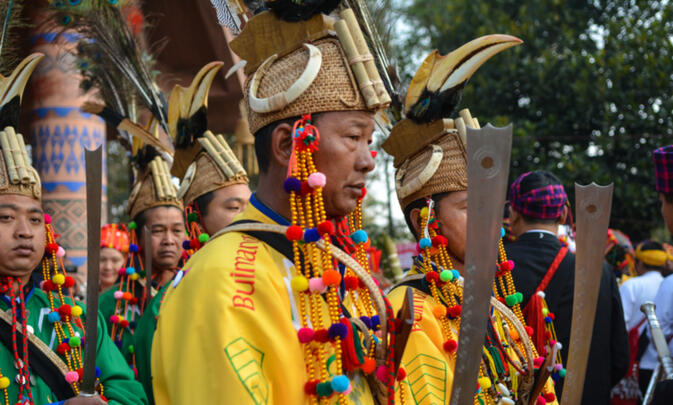 The dance and its related traditions grow out of one of the Jingpo's founding myths. The Sun God once held a party in his heavenly palace and encouraged his children to dance the munao zhongge. Every living thing on earth was invited to come, but only the birds were able to attend. After the Sun God's gathering concluded, the birds returned to earth and discovered a perfect forest full of all manner of fruit.

In celebration of their newfound bounty, the birds performed their own version of the munao zhongge, raising such a stir that people living nearby approached to see what was happening. This, according to legend, is how the Jingpo learned to perform the dance as they do today.

Also central to the festival are ceremonial machetes. The heavy knives are traditionally considered significant and versatile tools by the Jingpo, who traditionally live in the heavily forested mountains of southwestern Yunnan. Because of this, the largest Dehong celebration of munao zhongge, in Mangshi (芒市), features intricate machete dances as well as competitions.

The festivities in Mangshi this year last for five days from February 20-24. The festival has become an enormous showcase for Jingpo culture, not just inside of Yunnan, but also nationally. Local authorities — as with those in many of the province's lesser-known and far-flung places — are eager to attract multitudes of tourists by showcasing minority culture, a strategy encouraged by the provincial government as a way to stimulate regional economies. A full list of 2016 minority festivals across Yunnan is available here in Chinese. 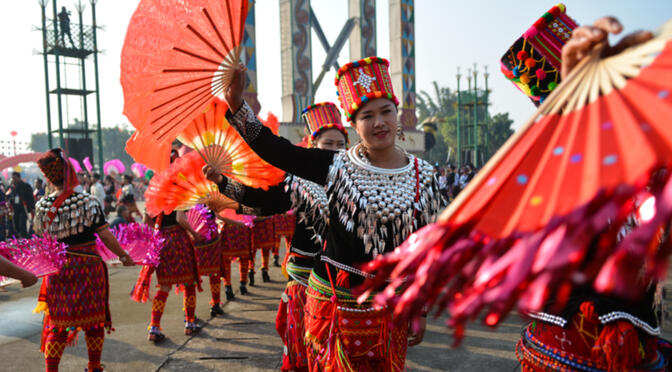