Rural China through the lens of Bangdong village 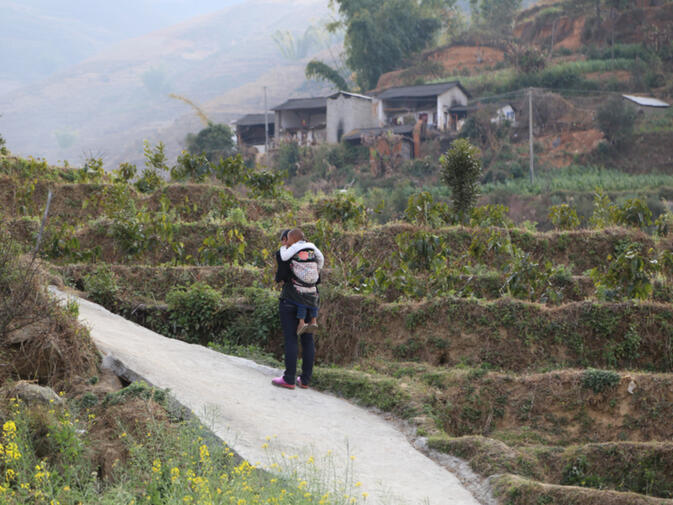 Editor's note: Beginning with our first trip there in 2010, GoKunming has returned sporadically to the little village of Bangdong (邦栋) in Lincang Prefecture (临沧). The hamlet is not simply a lovely place to visit, it has also proven to be an invaluable barometer of the change occurring almost everywhere across the Chinese countryside. Four different GoKunming authors have written about the village, and now Soyeong Park, who is currently involved in a gap-year program with Where There Be Dragons, becomes the fifth. The following article chronicles her impressions of this little-known tea outpost in western Yunnan.

'Ruxiang suishi' (入乡随事) translates roughly to 'after you enter a village, do as the villagers do'. Many a joke was cracked after our on-site director, Jesse Millett, put a humorous spin on this, saying instead, "ruxiang suiyi" (入乡随意), meaning 'after you enter a village, do... whatever you want'. However, it was a realistic concern within the group that we would commit some egregious social faux pas during our time in Bangdong. 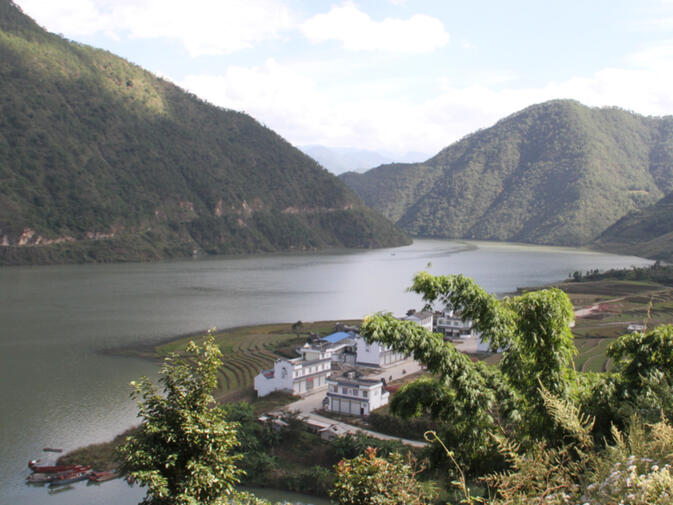 We arrived in the village about two weeks before Mid-Autumn Festival. Stepping out of the van that we had spent two rocky hours in, I was first struck by the breathtaking scenery that stretched the entire 1,600 meters down the mountain in front of me. Though it wasn't even close to freezing temperatures, I could see my breath, and the vast expanse in front of us was full of gently swaying tea, corn, banana and persimmon plants seeming to blow us their welcomes on the breeze. Then, I realized the mound of dirt that blocked a part of my view was actually an accumulation of garbage.

Twenty years ago, government-sponsored infrastructure development paved a big road winding around the mountains. It added access to nearby cities such as Lincang (临沧) and Yunxian (云县). However, being a forty-five minute uphill trek away from Bangdong, the road essentially skipped what used to be a thriving center of commerce. Goods on their way to the Silk Road — including Pu'er tea — once came up the Lancang River through the village. Now, even the local elementary school has been demolished and relocated two hours away from Bangdong, forcing families to send their children away during the week and pick them up every weekend. Access to health care is nearly nonexistent, with no professional medical service available locally and a government-issued doctor visiting only one day a year. 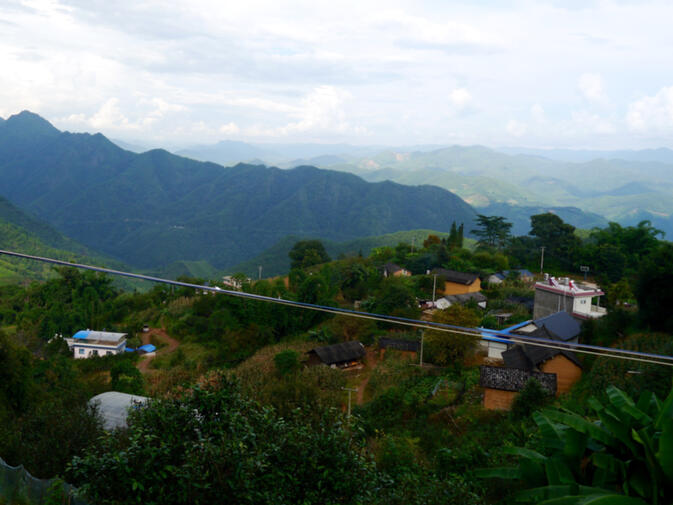 Three years ago, a road going down the mountain came in. It was built mostly for the benefit of a town located about halfway down to the river. This town, Xigui — home to some of the most expensive tea in Pu'er — was also a byproduct of the construction of the Dachaoshan Hydropower Station (大朝山大坝). The government compensated villagers with hefty sums of cash for the uprooting of their community and livelihoods, creating a displaced community of identical cigar-box houses with expensive cars parked in the courtyards.

As for Bangdong, Jesse says, "[the dam] really had no direct financial impact. It's far away enough that no one in the village was displaced, but seeing Xigui developing so quickly as a result of the dam, they slowly tried to catch up." This element of social pressure inevitably affected the mindset of villagers in Bangdong. The people are increasingly self-conscious, visibly aware of ideas like comparative affluence, the emerging income gap and living conditions. This is largely owed to the increasing presence of tangible representations of wealth, added to by every car passing through from Xigui and every returning visit from those who left for the cities. Jesse continues:

The biggest physical changes I've seen over the past few years are the new two-story concrete houses that basically everyone has switched to, and the popularization of things that just weren't present when I first brought students to Bangdong — like flush toilets and wifi. 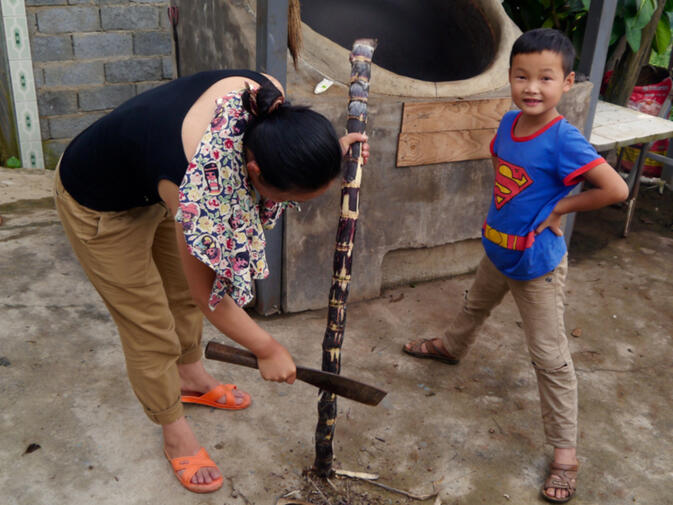 These changes, though they may sound to outsiders like natural progressions on the road to modernization, are often made not necessarily for practical improvement purposes. Traditional mud houses, for example, are warmer in the winter, cooler in the summer, and overall much more energy efficient when compared to their more 'modern' counterparts. Yet, having one's living quarters built with concrete and adding a second story now serves as a popular sign of class and affluence. Modern gadgets and purchases, then, mean that there is more non-biodegradable waste to be disposed of in the village. However, regular waste management is made impossible by inconvenient transportation out of the rural areas, so plastic is tossed to the mountainside where leftovers have always been disposed. While food scraps and rice paper are absorbed back into the soil with time, these new additions to the environment linger for years and years.

To keep up with the fast-paced flow of modernization, and to support this lifestyle influenced by urban ideals of affluence, Bangdong has changed to growing almost entirely just tea. Fields that once yielded rice and vegetables aplenty for providing a self-sustaining way of life are now seas of tea trees. With increased accessibility to modern and efficient tea-drying and roasting machinery, nearly every household is able to process and make its own tea instead of just growing it and selling it raw. However, this shift to nearly single-crop agriculture dependent on one cash crop, means that the daily lives of Bangdong's residents are now subject to the impact of slight fluctuations in price or demand in the market. This is true not only for tea, but also for all of the produce they purchase at the ganggai (赶街), or market, to put on the table at home. 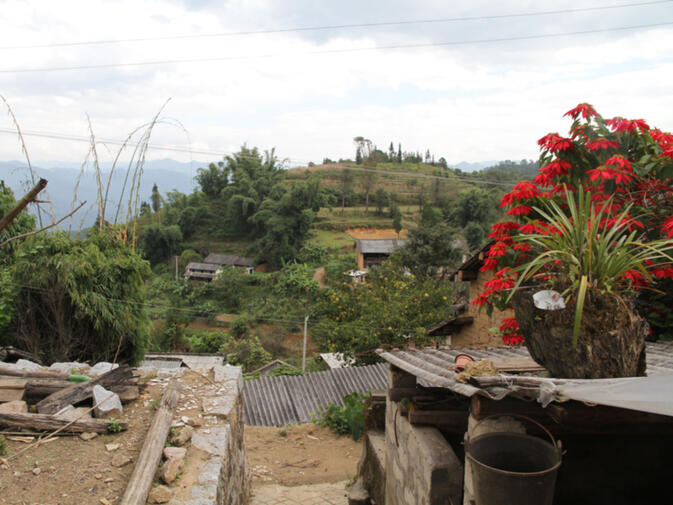 So, as family roasters pour out tea faster and faster, and more and more kilograms of tea are sold every season, the clash between the villagers' material wealth and their intangible richness of life is becoming increasingly visible. Children and youth are sent off to cities in search of an education or a job unlike those their parents had; those sent to find work find, resting on their shoulders, the pressure of making ends meet back home.

As an observer of Bangdong during my two-and-a-half weeks there, I was reminded of what an elderly innkeeper in Shaxi (沙溪), another Yunnan village with rich history, had told me. "Change is happening too quickly. We're making more money and the world is transforming but our people aren't nearly as close or as happy any more." Thus, Bangdong has joined the nation-wide trend of villages increasingly being inhabited by only the old and the very young, self-deprived of most of the rising generation. Those who leave for the cities come back to a town that little resembles the lively, close-knit community they grew up in. 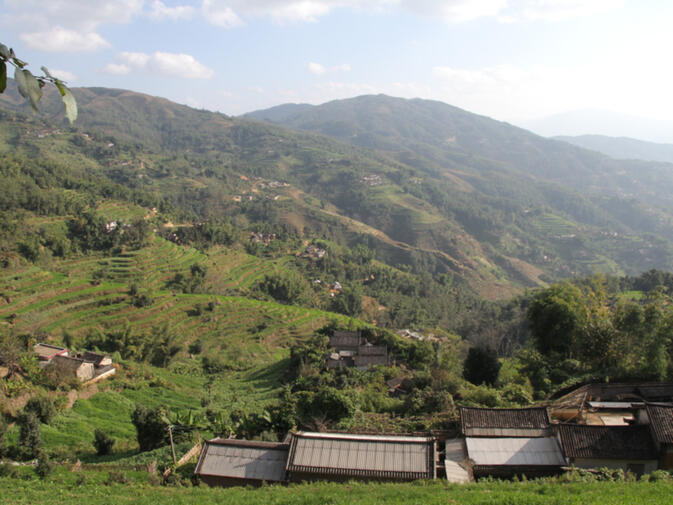 However, when creative minds that spent years outside the village return to the fading culture and community, indignant and nostalgic energy starts to bubble. One evening, two of these returned villagers sat down and came up with plans — some distant and grandiose, some simple and immediate — to pull the village they love back onto its feet. So, every night, those who aren't too exhausted after the long day of tea-making gathered and danced to traditional music at the new town square, designed and built specifically for this purpose.

A couple nights before we boarded the van headed back down the mountain, we had the opportunity to celebrate Mid-Autumn Festival with the villagers. As a bonfire crackled delightfully in the center of the square, we were swept into the merriment as the crowd swelled larger than it had been on any night during our stay. The entire village joined hands and we got to our feet as one — and danced. 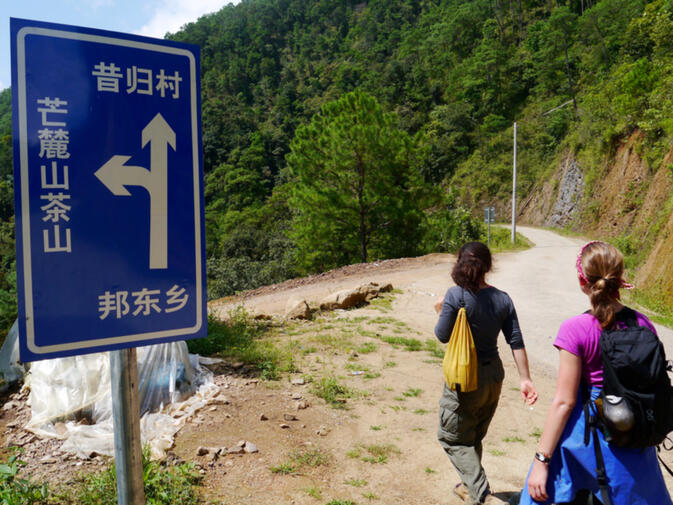 Thanks for this vivid portrait of Bangdong. Your reflections really bring to life the contradictions these people are facing.