Getting Away: Hampi, India

By Jordan Steinberg in Travel on December 3, 2015 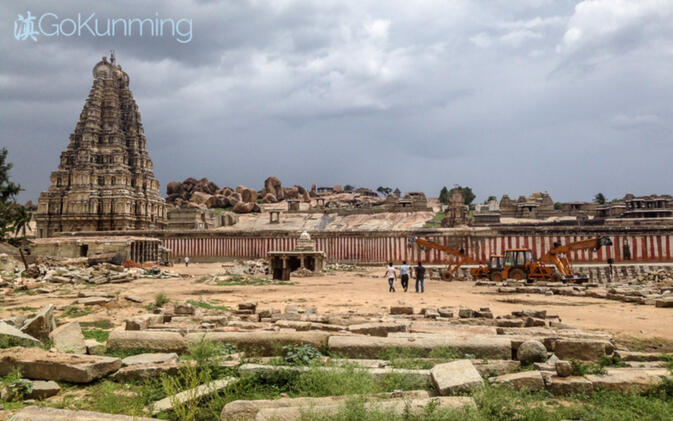 Prior to arriving in Kunming, I spent a month in India with three friends. It had its ups and downs, but my five-day visit to the little-known village of Hampi was the highlight of the trip. I arrived on a night train from Hyderabad on August 1, 2015.

Hampi is located almost directly between Hyderabad, Goa, and Bangaluru, in the southwest Indian state of Karnataka. In the sixteenth century, Hampi was the capital of the Vijayanagara Empire. Formed and unified in opposition to the Muslim kingdoms of the north, Vijayanagara was established as a Hindu kingdom. The empire's then-need for an army of one million soldiers illustrates the simmering tensions between India's north and south at the time. 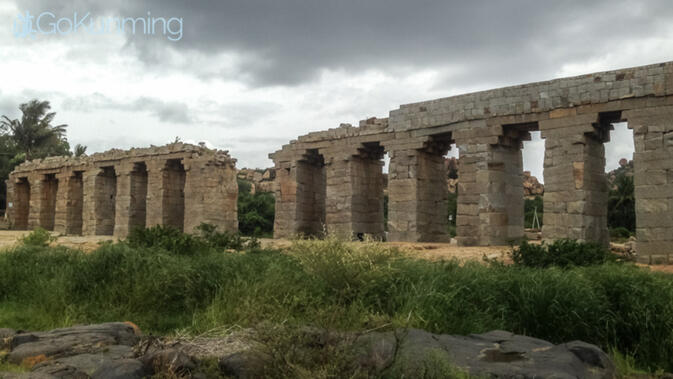 Five hundred years ago, Hampi's population of 500,000 made it the second largest city in the world after Beijing. Being the center of such a focused religious culture, the monuments, temples, and structures in the ancient city are singular to the rest of the world. Today, the area is a UNESCO World Heritage Site, frequented by adventuresome backpackers, and littered with ancient ruins and magnificent vistas.

Arriving on time to Hospet Junction, the local train station, we took a rickshaw to the Hampi pier. The Tungabhadra River divides the village in half, and the only way to cross it is by boat. The men in charge of the ferry presented us with three options: wait for enough people to fill the boat, pay 100 rupees (US$1.50) per person to leave immediately, or pay 50 rupees each to ride a raft which resembled an outsized half-coconut. 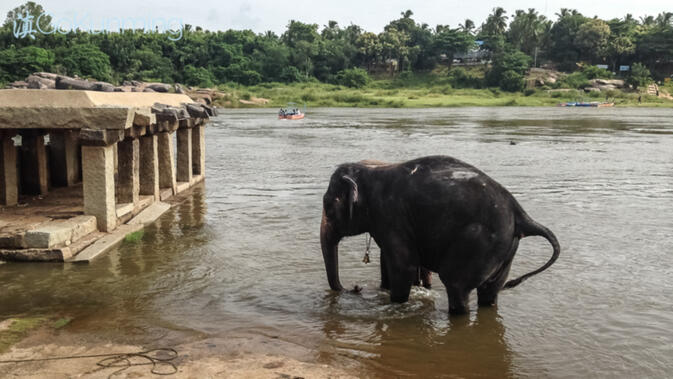 We chose the last option. The raft had a hole in it and was taking on water, but it was an appealing — or at least, adventurous — choice in the moment. So we went for it. By the time we took off, there were four tourists with large bags, the boatman, his friend and two eleven year-old kids in the raft. It took awhile, but we did eventually make it to the other side, albeit quite drenched.

On the first afternoon in Hampi, our host Murali set us up with motorbikes. I had never ridden one before, but Murali said "Good luck!", and off we went. Using a makeshift map, we navigated ten kilometers to the only nearby small town that had a petrol station and ATM. The ride there was fascinating, as it revealed a way of Indian life starkly different from the congested cities through which we had already travelled. 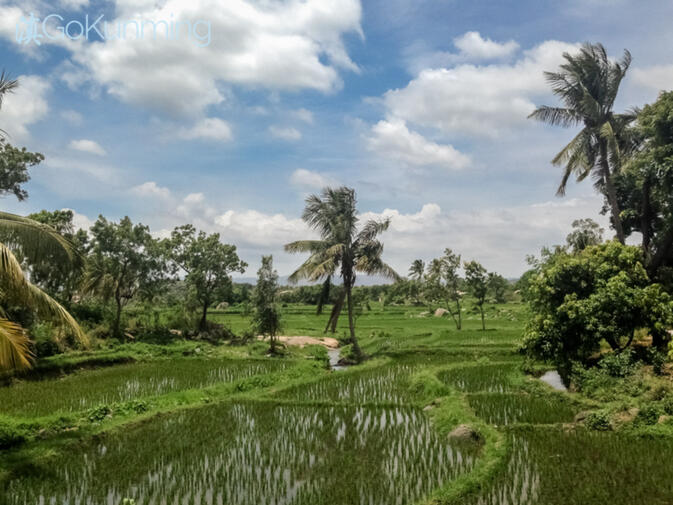 Gone were the poverty and dead dogs of Delhi, replaced with vast rice paddies, a wildly varying landscape of mountains and plains, as well only brief stretches of settlement. This is what I had hoped to see from the Subcontinent. Within the first 30 seconds of the ride, we passed an ancient and long-dry stone aqueduct seemingly more than 1,000 years-old.

The next day, I left my friends and took off on my own adventure. First heading northwest, I spent an hour sitting along the edge of Sanapur Lake. Murali's map made it look obvious how to get from the lake back to civilization. It was not. Heading in the right general direction, and knowing I wasn't going to find the exact route, I just drove along a canal to see where I would eventually end up. 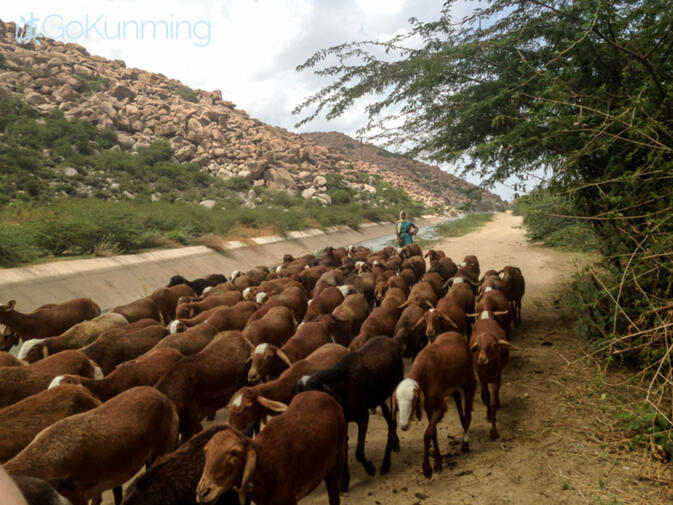 As it turned out, I followed the canal road through quarries, farms, past stray temples, minuscule villages, and took the road through tight pathways and wide-open landscapes. At one huge rice paddy, I could see a number of locals coming home after a long day's work. As they made it up to the road, I asked for directions. Helpfully, they flagged down a local man on a motorcycle, who guided me through a couple of villages, then pointed the rest of the way back to Hampi. Just as I about to make it back, a monsoon storm hit, forcing me to take refuge with two old women underneath a sheetmetal structure.

Before dinner that night, my friends and I caravanned to a local temple. Perched on top of Hemakuta Hill, we climbed what seemed like 6,000 steps to see a landscape view replete with sunset. The wind was howling at that elevation, but the vista was nothing short of incredible. 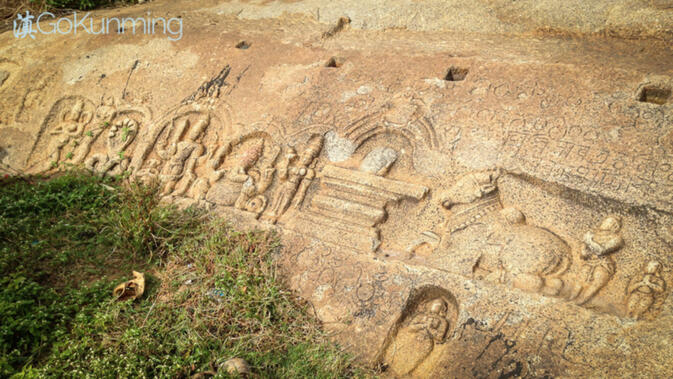 On my last full day in Hampi, it was finally time to cross the river again and investigate the ruins for which the area is known. Turns out, the temples and ruins have become commercialized the extent one would expect from UNESCO status. In a similar vein to Lijiang and Angkor Wat, this ruined the mystique somewhat, to the point that the place was not nearly at engaging as it should have been. That said, the structures themselves look amazing from the outside. Virupaksha Temple, especially, was an architectural marvel. The intricate stonework and engravings, along with the edifice's sheer size, made the surrounding locales pale in comparison. We ended up spending the rest of the time exploring that side of town, getting lunch while taking cover from another monsoon rain or two.

On the morning of our departure, we once again rode the half-coconut shell raft across the river to get back to the train depot. It was simply too early in the morning for the boat to safely navigate the crossing. We caught our train just in time, and successfully made it to Goa later that day. A week later, I arrived in Kunming. Now, months later, Hampi still stands out as the high point of my journey towards Kunming. 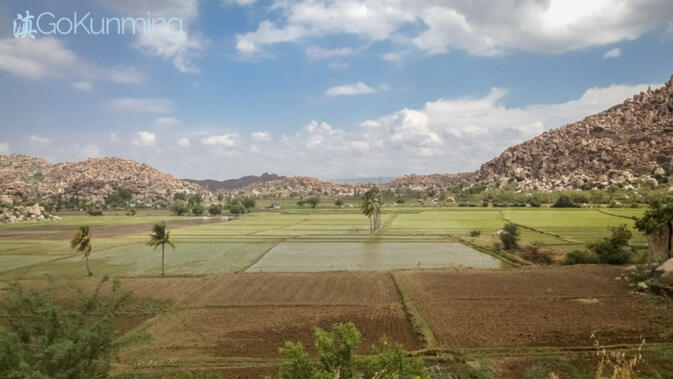 Getting Away: Inle Lake revisited

Sounds like a great time. Not sure how correct the description of Hampi as a little known village is, though! If you are in the area, coming from Yunnan, there is a Tibetan reservation in the mountains west of Bangalore for the sect of Tibetan Buddhism dominant in the traditional Kham region (ie. including Yunnan's Tibetan regions). If anyone can find out whether they have historical texts regarding Yunnan I would be eternally grateful. They do not respond to email for six months at a time, so you really have to go there! Another great site in Karnataka is the Jain village of en.wikipedia.org/wiki/Shravanabelagola

Voltaire, have you ever found, or heard, of a single Tibetan historical text on Yunnan? Maybe excluding Deqin and "Shangrila".

Not saying these aint exist, even Kunming and Lijiang had a Tibetan name.

Theres of course the story when King Gesar came to fight the Dali king. This is a great story by the way.

Nope, I don't read Tibetan. I figure if anyone knows what old remains it's that lineage's monks in India, and that's apparently where they hang out.

Theres a huge library of Tibetan texts in Kalimpong, and just scratching this surface, proved how difficult this task would be.

There are Shan, Mongolian, even Rakhine and Manipur sources on Yunnan + other sources still, and one tricky part is to figure out the name of Yunnan. Gandahar is one and Karajan is one etc.

I assume the Yunnan history science field still has plenty sources to dig out from.

Ive always wondered if tibetans used to have some guidebook how to get by caravans to Xishuangbanna. They were down to Moulmein too and northern Thailand.

Then again, maybe this was a trade secret.

Thanks for the tip about Kalimpong. I've never been to that area but am planning a trip to India in the near future, probably Kunming to Calcutta (not so far) but possibly via Nepal if cheaper, to buy a new sitar. It would be cool to check out some research leads at the same time, and give me an excuse to stay longer!

I'm very aware of the volume of Shan and Burmese information. One great example I read of is a historical event involving the surrounding of Kunming by Shan armies in retaliation for Chinese agression. Apparently they didn't sack the city, just demanded to be left alone, turned around and went home.

I am not aware of Mongolian sources (do you mean something written in Khitan by any chance?). Any information on Rakhine and Manipur sources would be much appreciated.

I am still trying to push forward on a stupidly large project to compile a syncretic ancient narrative history of the region for a general audience, incorporating oral and written histories, anthropological, art history, archaeological and genetic sources. It's a crazy open ended project but one that provides lots of interest... eg. just these last two weeks I visited three neolithic sites (two were paintings, one was incised) in Wenshan and the remote cliff tombs of the Ku people near the Guangxi border.

Hampi's great! One of my favorite places in India. Here's a link to my photo album from Hampi in 2006:

Lovely read! Totally made me wanna go there.

@Peter99 I'd be very excited to hear that story about when King Gesar came to fight the Dali King. Do you know where I'd be able to find it?

Hi Flengs. Its a story when Gesar went to fight King Sadam (Sa Dam) of Jang (Yunnan). Searching on Internet with these words should bring some hits.

Sorry to OP for getting a bit on a sideroad topic around here.

"Given that the mythological and allegorical elements of the story defy place and time, the historicity of figures in the cycle is indeterminate. Though the epic was sung all over Tibetan-speaking regions, with Kham and Amdo long regarded as the centres for its diffusion, traditions do connect Gesar with the former Kingdom of Ling (Wylie: gling). In Tibetan, gling means "island" but can have, as with the Sanskrit word dvīpa), the secondary meaning of "continent". Ling was a petty kingdom located in Kham between the Yangtze and Yalong River. An historical kingdom of Lingtsang (Wylie: gling tshang) existed until the 20th century."

Voltaire, of course its myth, King Gesar is total myth like Greek mythology.

Jangyul (Jang-Yul) is Yunnan in Tibetan, or at least, northwestern Yunnan is/has been described so. Yul is area in tibetan but what was Jang, it has several meanings right. So which Jang is it, would anyone know? Cant remember anymore all this stuff, but Karajang was one mongolian word for Yunnan, and theres also the Jang. Karajang maybe mongolian from Gandhara, but theres this black and white thing here too, Yunnan has also been defined by colors, just as its people, like baizu.

Recent excavations at the site have brought to light a large number of palatial complexes and basements of several platforms. Interesting finds include a large number of stone images, both in round and relief, beautiful terracotta objects and stucco figures that once embellished the palaces. In addition many gold and copper coins, household utensils, a square stepped-tank (sarovara) at the south-west of Mahanavami Dibba, and a large number of ceramics including the important variety of porcelain and inscribed Buddhist sculptures of 2nd -3rd century AD have also been unearthed.