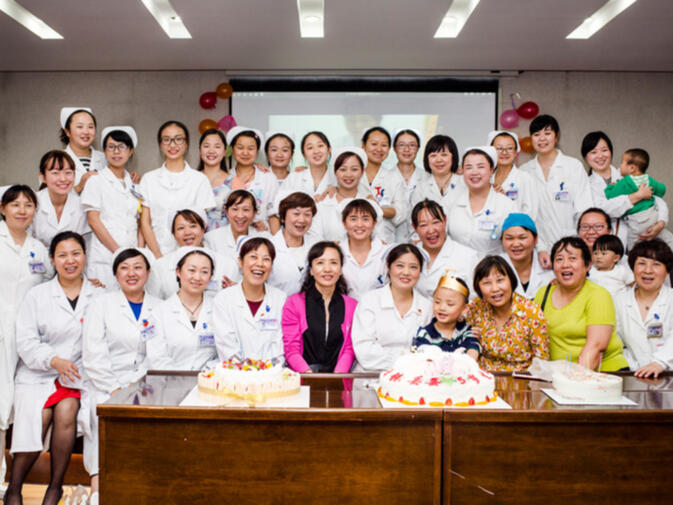 For his entire life, a boy named Jun Ming has lived in a Kunming hospital. He is not bedridden or terminally ill, but instead was brought up by nurses and medical staffers when his parents abandoned him shortly after he was born. Last week, Jun celebrated his fifth birthday with 100 of his adopted mothers.

Jun was born without a heartbeat on September 21, 2010 and doctors spent five minutes resuscitating him. He was eventually diagnosed with cerebral palsy, a brain disorder often characterized by poor or nonexistent muscle control affecting everything from movement and speech to posture.

When Jun's parents were informed of their son's ailment, they promptly left the Kunming Maternity and Children's Care Medical Center without him and refused to pay his bills. Although his mother, father and grandparents have all visited Jun, they seem to be under the impression that cerebral palsy is curable, which it is not. His mother has even gone so far as to accuse nurses caring for her son of "tormenting" her and insists, "the hospital should cure the boy first before asking us to take him home."

So for now, Jun remains in the only home he has ever known. More than 100 nurses take care of him, often staying after their work shifts end to play with him or teach him basics he would otherwise be learning in school. His adoptive mothers pool their money to buy Jun clothes, food, toys and other necessities, occasionally accepting monetary donations from patients and their families.

Jun spends most of his time in the Obstetrics department. There he has his own room and is given the freedom to explore the hospital as he pleases, although he rarely strays from the side of one of his mothers. On his birthday last week, Jun was joined by nearly all of the hospital staffers who have helped raised him over the years. He was given not one, but three cakes, received several gifts and posed for pictures with his adoptive family. He told reporters his birthday wish was to start attending public school.

Also in attendance at the party were Jun's parents, who brought presents of their own. But despite their appearance, Jun's future remains unclear. His mother and father have filed a lawsuit against the hospital claiming his cerebral palsy is the result of negligence. Jun's mother has said she is grateful for the care nurses have given her son, but will not consider taking custody until "an independent third party can prove [Jun] is healthy."

What a perfect China story. Beautiful yet sad, involving money, law and probably stupidity, and with very contradictory characters. And in the middle of it, innocence.

I agree. And I guess you can rightfully omit the work "probably".

@lester there is a good movie about it, based on a real story: blind mountain