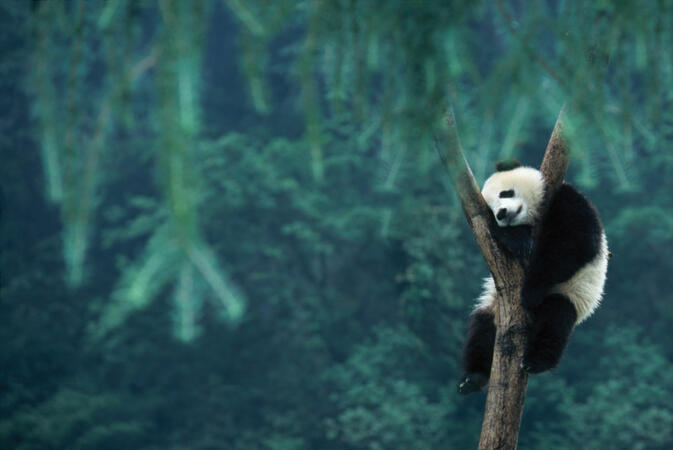 China's national symbol, the giant panda, has for years been the focus of intense protection and stewardship measures. A new study published in the peer-reviewed scientific journal Conservation Biology finds that panda-focused preservation efforts have had the unintended consequence of sheltering an enormous array of other animals.

While such consequences might be expected to some degree, the scope and diversity of wildlife benefiting from what authors of the study term the panda's "protective umbrella" is pleasantly surprising. Researchers, led by Professor Stuart L Pimm of Duke University, credit the establishment of a network of nationally protected areas. According to Pimm:

Pimm worked with Li Binbin, a Duke PhD student researching wildlife conservation efforts in the Min Mountains in Sichuan. The two produced computer models combining pre-existing species population surveys, elevation schematics and habitat projections to create a base map. They then combined those with known panda ranges as well as the location of existing nature reserves to reach their conclusions.

Long-term and extensive conservation efforts concerning the wild panda have slowly yielded tangible results. A 2014 census estimated a population of more than 1,800 individuals, up from less than 1,000 in the late 1970s. The new research gives hope that many other, lesser-known, endangered animals might be making similar recoveries. "Many people have worried that in protecting the giant panda, we might be neglecting other species, but this isn't the case," Li said.

In Yunnan, into which pandas may actually be expanding their traditional range, the study's findings may also be reason for optimism. Home to China's first national park, large swathes of the province's northwest are protected areas. One of these, Laojunshan National Park (老君山国家公园) is a showcase for the biological diversity of the Three Parallel Rivers area.

The park is home to ten percent of the world's rhododendron species and 168 endangered plant and animal species. Perhaps the findings of the Sichuan panda study can be replicated in Yunnan in places where efforts to save the Yunnan Golden Monkey have proven successful. If so, Li's optimistic assertion that "there is great hope in the future" for Chinese wildlife, would extend South of the Clouds.

A good thing, as simple concentration on the panda is primarily for nationalistic reasons and is also popular because they are considered cute, whereas environmental protection needs to include attention to more serious matters.