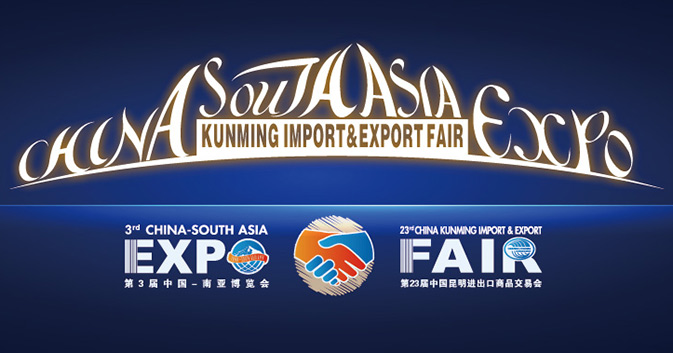 Kunming's annual trade expositions have had their share of growing pains, especially in terms outreach to non-Chinese speakers. Despite those, the twin fairs have grown significantly larger not only in size, but also in significance, over the three years of their coupled existence. This year does not look to be any different, as organizers expect the third annual China-South Asia Expo (CSAEXPO) and the twenty-third annual Kunming Import and Export Fair (KIEF) to quite literally dwarf their predecessors.

For much of its two-decade run as Kunming's largest and most cosmopolitan event, KIEF served as a yearly testing ground for China's Bridgehead Strategy — a concerted effort to modernize and expand Yunnan's economy through massive infrastructure projects designed to more closely link the province with its Southeast Asian neighbors.

Building upon the fair's success, three years ago it was coupled with the first China-South Asia Expo, and a trade behemoth was born. Reflecting the twin festivals' ever-increasing size and importance, this year both will be held beginning the second week of June at a new, purpose-built facility — the enormous Kunming Dianchi Convention and Exhibition Center (昆明滇池国际会展中心) on the shores of Dianchi Lake.

Previous fairs were held at Kunming International Convention and Exhibition Center (中国昆明国际会展中心). Expo planners deemed that location too small, and in 2013 construction started on an expansive facility. Money was apparently not an obstacle, and construction of the new 7.9 billion yuan (US$1.3 billion) convention center finished on May 13, 2015. Also making its debut this year is a dedicated English-language website promoting KIEF and CSAEXPO.

As if 12 separate exhibition halls that together are twice the size of the previous venue were not enough, the area surrounding the center will be under construction for most of the next decade as developers build a monstrous new business district. When completed, the complex will feature a water park, thousands of luxury apartments and several high-end boutique shopping areas.

But that is years in the making. In the near term, the convention center will welcome 6,000 exhibitors from 75 countries and regions, 500 China-based companies, 24 Fortune 500 conglomerates and hundreds of dignitaries attending seminars and related forums. This year, India was chosen as the 'featured country' and is allotted a special pavilion from which to showcase not only its largest and most well-known industries, but also its history and culture.

India is perhaps the obvious choice for such a privilege, as Beijing has made no secret of its desire to build an overland trade route connecting the world's two most populous countries via Kunming and Kolkata. Part of Xi Jinping's Belt and Road Initiative, the Bangladesh-China-India-Myanmar corridor, if ever realized, would more closely integrate China's economy with those of South Asia.

In addition to the behind-the-scenes soft power diplomacy, hundreds of small business owners from overseas will flock to Kunming to sell their wares and establish professional connections. To facilitate this, expo organizers have trained 1,875 bilingual college volunteers to assist vendors and visitors alike. Pre-opening preparations suggest the expos could see nearly 500,000 people pass through the gates. Half a million RFID tickets have been produced for those who want to attend. They cost 30 yuan and can be purchased beginning June 1 at the venue or at any China Post Office location.

Once inside the convention center, cards can be used to purchase meals and products sold by expo vendors. When the trade fairs end, the tickets are planned to act as rechargeable debit cards to be used on buses, swiped to pay utility bills and are expected to be accepted at select shopping malls around the city. However, no announcement regarding how or where to add money to the cards has been made public.

The China-South Asia Expo and KIEF will run concurrently from June 12-16 but opening and closing times have not yet been released. Eight dedicated buses will shuttle people to and from the convention center from various stops around the city between 7am and 5pm. A full map and details can be found here. 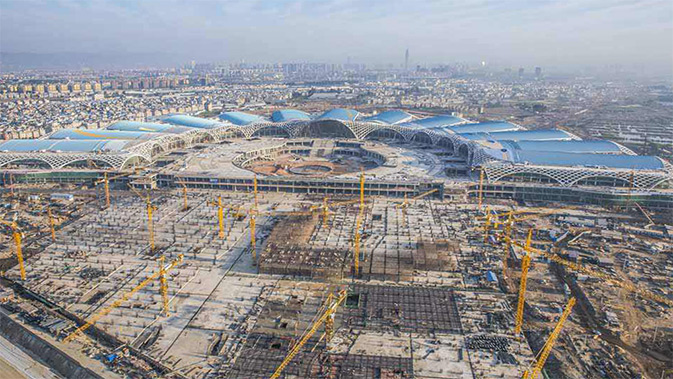 A view of the Kunming Dianchi Convention and Exhibition Center several months before construction of the main exhibition halls was completed
© Copyright 2005-2021 GoKunming.com all rights reserved. This material may not be republished, rewritten or redistributed without permission.

The circular layout at least does looks to be an improvement on the old center, which was very difficult to navigate. However, what's with the vast Stalinist guangchang? I know your mate runs a tile factory, but can't we get some more progressive urban design happening please? It's like the new south bus station ... arrive from central Kunming on the metro, walk across a huge paved square exposed to sun, wind and rain, then line up in a vast ticket hall like 20 years ago before waiting for your transport connection. Come on guys, it's not that hard. Think about the bloody customer.

The benefit of the customer is rarely the real goal of projects - just an indispensable item for arriving at it.

Here is a bus schedule for the Expo in English. Buses run from 7am to 7pm and cost two yuan.

Attendees have also been asked not to show up until after noon the first day of the Expo because the crush of people is expected to be overwhelming.