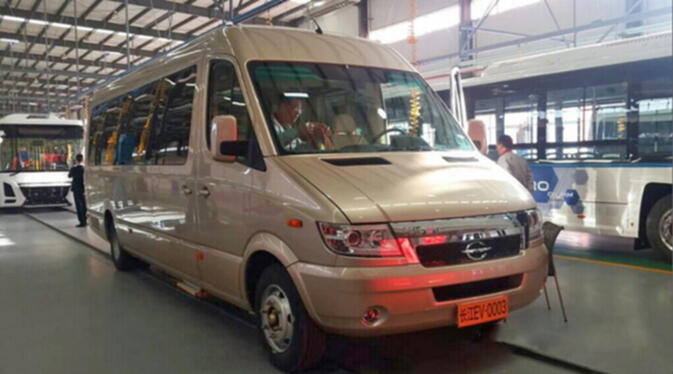 Kunming car manufacturer Yunnan Wulong Automobiles (云南五龙汽车) unveiled the first wholly electric commercial vehicle engineered and built in the province on May 25. The vehicle is a large-sized passenger van, and while prohibitively expensive compared to similar gas-burning models, the price is significantly offset by government subsidies designed to encourage corporate buyers.

At 980,000 yuan, the uninspiringly named FDE6810 is part of the company's Changjiang (长江) line of vehicles, and is not cheap. However, those interested in purchasing the 19-seat van are eligible to apply for two government subsidies — one national and the other provided by the city of Kunming — totaling 600,000 yuan, thus reducing the total price by nearly two-thirds.

The FDE6810 uses one kilowatt of electricity to travel three kilometers, making it significantly cheaper than driving an equivalent gas-powered car, according to Wulong general manager Zhu Chengde (朱承德). Regular models have a 260-kilometer range on one charge, while a more expensive extended range version can travel 460 kilometers.

The van charges its lithium battery by plugging into an industrial grade 380-volt AC outlet or by using an onboard charger. When attached to a sufficient power source, the battery reaches an 80 percent charge in half an hour, while using the refillable built-in source takes a considerably longer five hours.

At the vehicle launch ceremony, Zhu told reporters Wulong expects to produce 3,500 of the vehicles between now and March 2016. Expected sales plus the two government subsidies could equal 3.2 billion yuan (US$516 million), which Zhu said would be reinvested in further research and development aimed at bringing the van's price down to more reasonable levels.

Wulong's parent company is based in Hong Kong, where it produces a range of electric automobiles, including commuter buses, sport utility vehicles and sedans. In 2014, the company signed a contract to provide hundreds of locally produced green energy buses to augment Kunming's aging fleet.

Perhaps the biggest challenge to the new FDE6810 becoming a successful addition to southwest China's growing commercial electric vehicle market is the lack of existing charging stations in Yunnan. To address this situation, Yunnan Power Grid Corporation (云南电网) is working with a group of locally-based green energy companies to build charging stations at municipally owned parking garages, bus terminals and large residential areas in Kunming, as well as at highway gas stations across the province.

Sounds good to me!

"Having heard so much good about petrol cars, we decided to test drive one. They are said to combine cheap price with long range and fast charging. A winning formula on paper – but how are they in real life?"

Interesting, Arnaudur, but I'm afraid these petrol engines will never catch on.