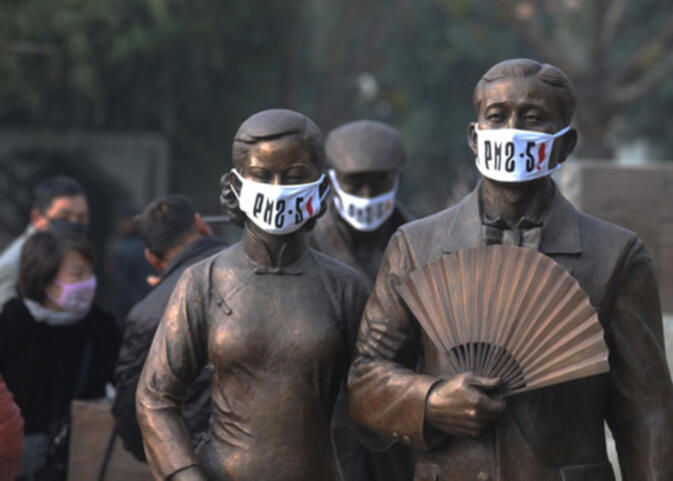 The country's large and medium sized municipalities continue to suffer from high levels of airborne pollution — especially some of the smallest and most dangerous types of particulate matter. This is the conclusion of a survey analyzing first quarter government data from 360 Chinese cities released this week by Greenpeace East Asia.

The report utilizes real-time data collected by air monitoring stations around China using measurements for "six air pollutants including PM2.5 concentrations". And although the first three months of 2015 were encouraging for Beijing and a few other noteworthy metropolitan areas, a full 90 percent of cities included in the survey have PM2.5 levels that "far exceed China's own air quality standards".

The average concentration of PM2.5 in the 360 cities was 66 micrograms per cubic meter of air. This aggregate is almost twice the Chinese national quality standard of 35 micrograms and two and a half times the exposure level set by the World Health Organization. According to the study's lead author, Zhang Kai:

We welcome the unprecedented transparency with which the government is acting to disclose air pollution data. Armed with this information, the government must now ensure that pollution is not simply relocated to other regions, and that the same strict measures enacted in cities like Beijing are actually enforced across the country.

Zhang was referring to the nation's capital showing marked decreases in PM2.5 levels because of more stringent enforcement of air pollution laws. However, at the same time, vast swathes of China, including areas along the Yangtze and Pearl rivers showed dangerously high aggregate pollution levels.

Worst on the list from a provincial standpoint is Henan, with an average daily Air Quality Index (AQI) of 103.3. It was followed closely by Hubei and Hebei. In comparison, Yunnan ranked twenty-eighth on the list of 31 with an aggregate AQI of 40.3. On the list of cities, no Yunnan municipality makes an appearance until Baoshan, which is ranked 217 with an AQI rating of 59. Below are the names of all cities in Yunnan — worst to best — included in the list, followed by their rank out of 360 and AQI rating.

Below are the names of all cities in Yunnan — worst to best — included in the list, followed by their rank out of 360 and AQI rating - Here is a good source to choose a good place to live in Yunnan in regards to air quality.

six air pollutants including PM2.5 concentrations - I would really like to know what the other 5 pollutants are.

I find the average of 35 to be an amazing figure. I do not think in all the times i have checked the readings for Kunming i ever saw a reading close to that low let alone to be the average.

Beware that the author is probably using the Chinese AQI. It being an index, it is a relatively arbitrary figure compared to the absolute value of PM2.5 particles in microgrammes per cubic metre!

The American AQI standard would rate the concentrations with a much higher index score (also implying much higher health risks)!

Jinghong, Mengzi, and Zhaotong I can understand, but a bit suspicious that Baoshan, Wenshan, Simao, Lincang, Dali, and Mangshi all rank as more heavily polluted than Kunming!

aren't these numbers somewhat pointless unless they can be directly correlated to risk of cancer?