Heijing: Where salt was king 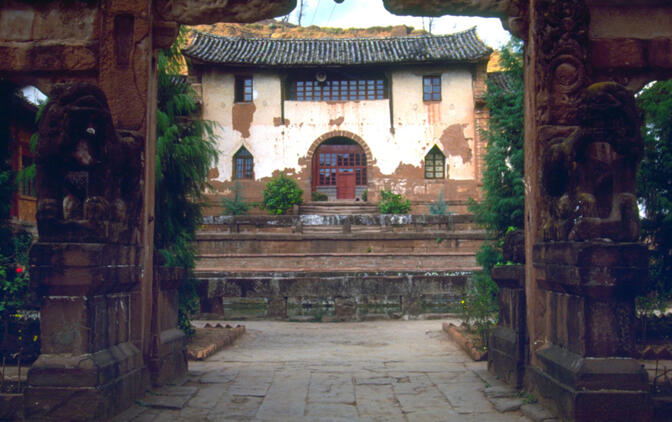 At first glance Heijing is just a charming little town along a clean but shallow river in the mountainous middle of Chuxiong Prefecture in central Yunnan. Terraced fields step up the slopes on both sides. The blue-grey humps of higher mountains loom to the north. Smooth red sandstone lines the Longchuan River banks and is the main building material in the town.

It's not spectacular, but anyway pretty. Only after entering the town does one begin to get an idea why the provincial government began promoting it as Yunnan's latest undiscovered tourist spot. Until 1949 Heijing was one of the most important cities in Yunnan and its residents among the province's wealthiest. 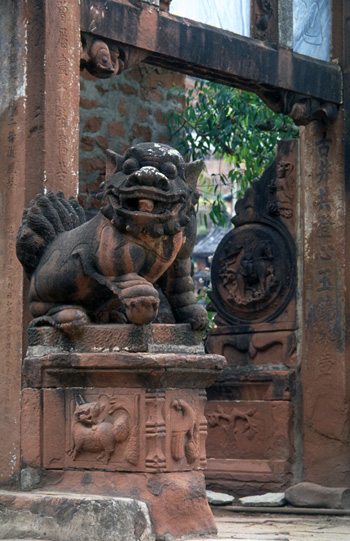 The evidence is at once apparent in the fancy sculpted gate and monuments at the southern entrance to town. Past this gate and off the lanes in the upper part of town across the river stand many fancy, capacious Qing Dynasty houses. Some have long been unoccupied and are badly in need of restoration, including the magnificent Wu family mansion, with five stories and 99 rooms. Others vanished with the shrinkage of Heijing, for they were home to a species of businessman that became extinct with the founding of New China and the reorganization of the nation's commerce — the wealthy salt trader.

Those black holes in the riverbank are abandoned salt wells. Heijing once had eight functioning salt wells and supplied most of northern Yunnan, including Kunming. Now only one remains operative, while most of the salt used in Yunnan today comes from eastern provinces.

The town's name is a contraction of Heiniujing—Black Buffalo Well. It was named after the black buffalo that discovered the well 2,000 years ago when taken for grazing in the area by a local Yi girl. Later on the buffalo fell into this well and, according to legend, metamorphosed into a huge boulder still there at the bottom.

This was the first salt well in the vicinity. Serious production only began in the Tang Dynasty. It peaked during the Ming and Qing Dynasties, when the government organized and supervised the salt trade and regulated its distribution. By the end of the Qing Dynasty salt tax collection constituted 47 percent of provincial revenues. 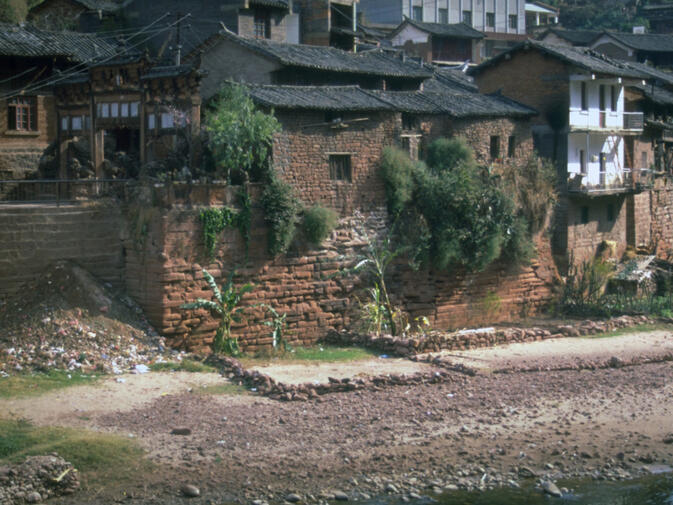 Heijing produced its salt from wells that were up to 80 meters deep. Seven or eight men turned a huge wheel, to which was attached a wide pail two meters long to scoop up the brine. The work crew them boiled the brine in big cauldrons until only a residue remained. This they pounded and cleaned, laid out blocks of it on the riverbank to dry, and then cut these into cakes for transport.

Caravans of pack mules or porters conveyed the salt from Heijing to various destinations in central Yunnan. Six sentry stations were erected in the vicinity to watch for smuggling, which, given the nature and importance of the commodity, was always rampant. Porters themselves chipped off bits of the salt cakes they were carrying and sold them later. Arrested smugglers had their salt confiscated, but were jailed for only two nights. 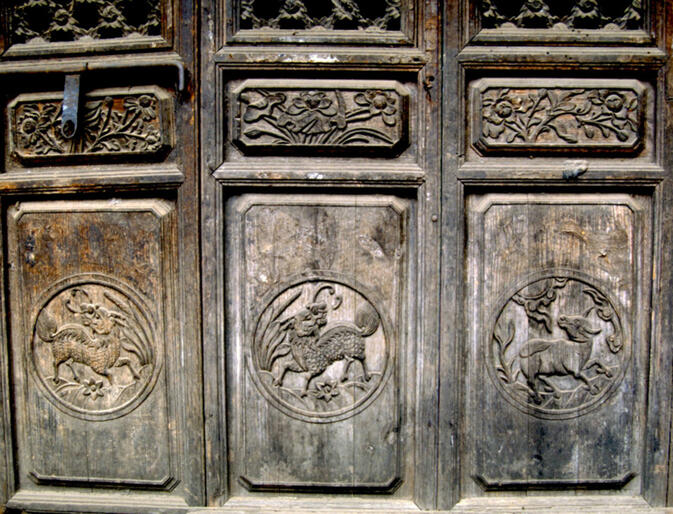 In order to acquire the right to participate in this lucrative trade, an aspiring Heijing salt producer first had to purchase a license from the provincial government. Government agents established quotas for registered producers, allocated the brine and collected taxes on the spot. But producers devised various schemes to obtain more brine, produce past their quota and sell the surplus on the black market. Even without cheating, though, licensed producers could grow wealthy just meeting government demands.

By the end of the Qing Dynasty 84 families were in possession of such a license. They were the richest folks in town, with multi-story houses and large household staffs. They employed artisans from Dali to make their furniture and outfit their homes with decorative plaques and door panels, screened windows, arched roof supports, painted tiles under the courtyard eaves, dragon-headed water basins and sculpted lion heads on the bases of the house posts. 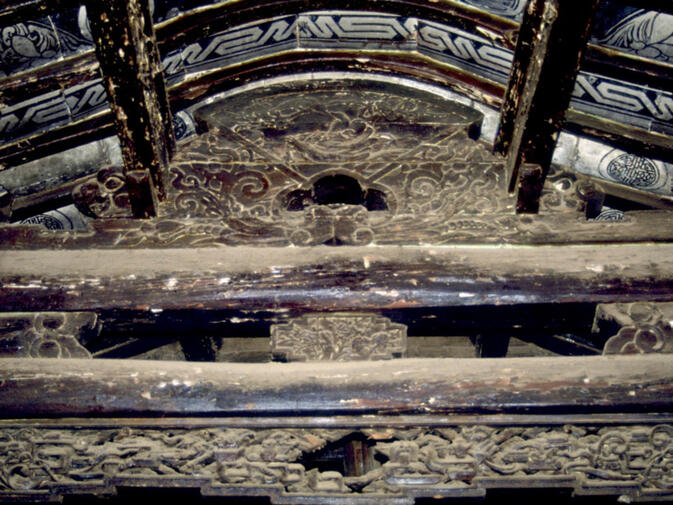 That anyone at all got fabulously wealthy dealing salt may seem extraordinary at first. With no competition and a constant heavy demand, Heijing's salt trade generated wealth for everybody in town, not just the 84 license holders. Porters only had to work three or four hours per day to make a good living. Itinerant merchants made frequent stops and the town hummed with prosperity. Even the vegetable vendors wore ornaments of gold and jade.

But it was the rich who defined the public life of the city and patronized religion. Before 1949, the town and its environs boasted fifty temples and mosques, plus one Christian church. Contemporary Heijing has but four — Zhetian Buddhist Temple in the lower town, Zhenjuechan Buddhist Temple high up on the west bank hill, Feilaisi, dedicated to the Chinese trinity of faiths— Buddhism, Daoism and Confucianism — just above the upper town, and the Wenchan Confucian Temple in the centre of the upper town. 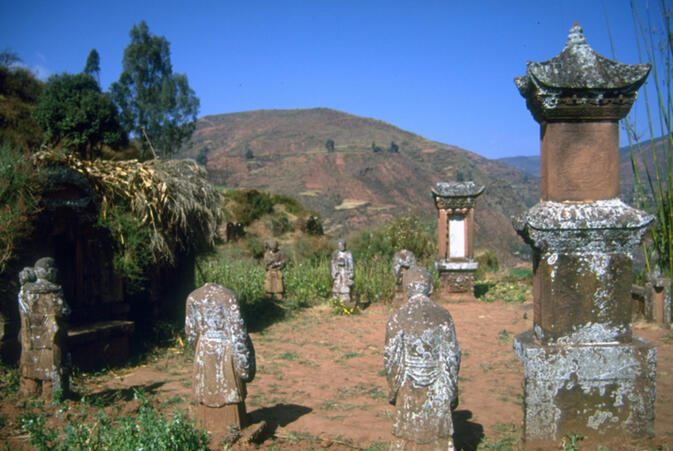 Above the upper town's cobbled streets and two-story shop-houses, two tall columns mark the boundary between burial plots of those who died normal deaths and those who died violently, accidentally, or without having married. High above this lies a smaller cemetery called the Monk's Tomb. Here is the grave of a former warlord who abandoned his military career to become a monk. After he died a former officer of his built this special tomb and erected six statues of monk-guards to protect his soul. This site is one of the few extant examples of this old custom.

To the Wenchan Temple, with its own ceremonial gate, pond, elephant-headed roof struts and old dormitories, the salt traders sent their sons to study. For a small town, Heijing had a high number of accomplished scholars who passed the final round of examinations in the imperial court. Their descendants today proudly keep the commemorative boards issued to them by the court in Beijing. 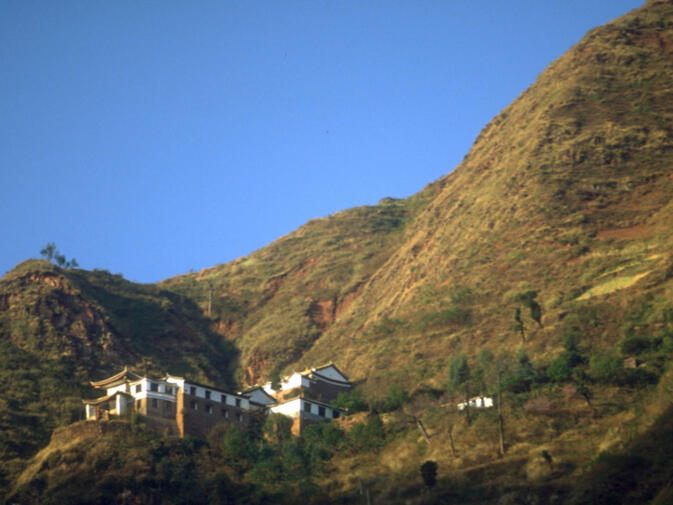 Besides the reverence for education, the salt traders cultivated a sense of Confucian ethics. They honored virtuous wives, defined as those who embodied Confucian principles when they became widows, as did the Qing court, especially in the years of the Dowager Empress Ci Xi. The Memorial Gateway for Chaste and Dutiful Women in the lower town was erected during the dowager's reign to honor several such Heijing ladies. Even today the Confucian tradition is still influential, for Heijing's older generation is known for its conservatism.

That may explain the subdued contemporary nightlife — there's little to do after dark. But in its heyday nightlife in Heijing sparkled with parties and public spectacles hosted by the rich. The main street was lined with opium dens and majiang parlors, where the porters tended to spend the greater part of their time and wages. Food vendors also worked the residential lanes where the salt traders lived. From the upper stories of their high-walled houses the customers lowered a tray by rope, the vendors filled it with various dishes, the household hoisted it up and then lowered down the money. 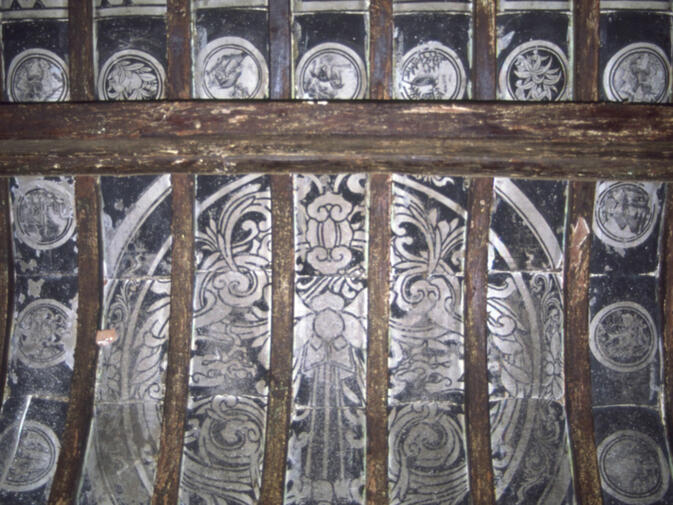 Aside from the opium addicts, most Heijing residents spent their evenings watching one of the public opera performances sponsored by rich families. For ten months of the year at least one opera, often more, was performed nearly every night by professional Beijing and Yunnan Opera troupes whom the salt traders paid to come to Heijing.

Life in old Heijing was easy and good. The salt traders devoted much of their wealth and leisure to the pursuit of culture. In doing so they enriched not only their own lives but also those of all the town's residents. When they disappeared as a class, no one took their place. 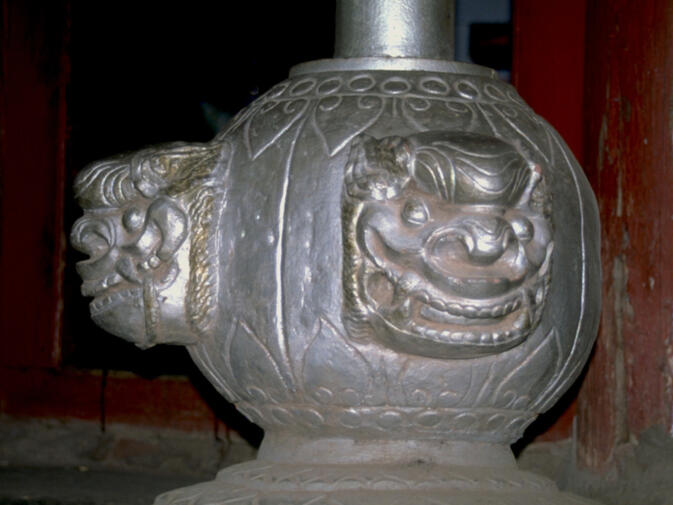 Heijing shrank and took on the character of an ordinary small town in Yunnan. Evocative relics remain, from the memorial gates and vacant mansions to the carvings on the posts and doors, and even the ancient salt wells. With a little imagination the visitor can conjure a vision of Heijing in its prime, when houses were works of art, scholars were venerated, high culture was glorified and salt was king.

Editor's note: This article by author Jim Goodman was originally posted on his website Black Eagle Flights (requires proxy). There you can find accounts and photos of Goodman's 30 years in China and Southeast Asia. Collections of his works — many of them about Yunnan — can be purchased on Amazon and Lulu. 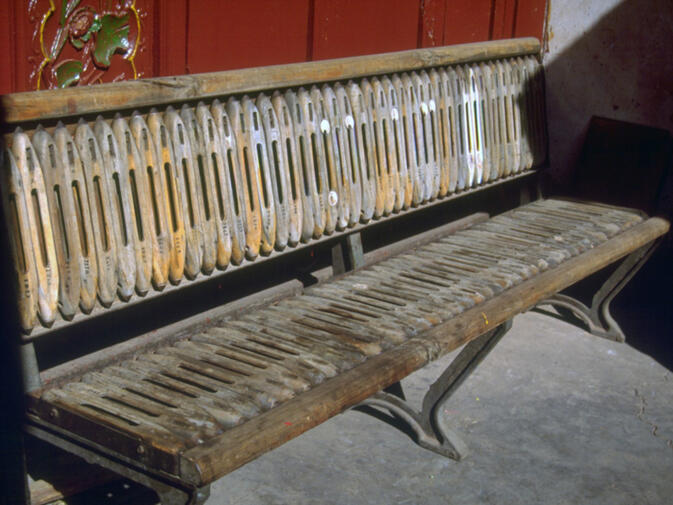 Courtyard bench at Zhenjuechan Temple made from weaving shuttles

The pictures are a bit uninspiring.

Really nice and informative article. Is this place different than the "other" salt merchant article done a while back, or the same place?

Visited yesterday. The atmosphere was a little frosty towards foreigners after covid. But still some lovely people there. Sadly the figures guarding the monk's tomb were stolen two years ago. One of the tombs was prised open so I presume both were looted. It's the furthest site to walk to from the town as well so maybe not worth it :(

The atmosphere might be frosty towards all strangers, post covid, and especially if there has been a tomb robbery.