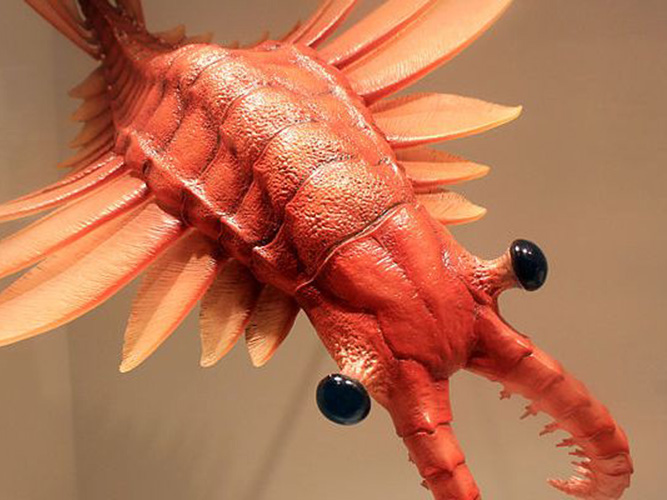 Artist's rendering of Lyrarapax unguispinus based on fossils found in Yunnan

Discoveries made in Yunnan could change the way biologists worldwide understand the earliest beginnings of intelligent life on earth. At issue are the fossils of two ancient organisms unearthed near Fuxian Lake outside of Kunming, which researchers say they contain the remarkably intact remains of the oldest brains ever found.

Scientists at the National History Museum in London studying the primitive brains argue the rise of a central nervous system arose at a single point in time. Ma Xiaoya, a researcher at the museum, has been examining three sets of fossils, those of the bizarre-looking animals Alalcomenaeus, Lyrarapax and Fuxianhuia.

The latter two were discovered in Chengjiang County (澄江县), Fuxianhuia in 2013 and Lyrarapax one year later. Both creatures have grabbing, claw-like appendages mounted at the front of their bodies, and represent some of the first examples of organisms with a developed central nervous system extending beyond their heads.

Ma's colleague, Greg Edgecombe, will present the pair's findings at a March 9 conference on the evolution of the brain. In part, those findings show the minds of both Lyrarapax and Fuxianhuia — which swam in the primordial seas more than 500 million years ago — share specific similarities to modern brains, including those of humans. According to Ma, quoted in the Sunday Times:

The layout and structure of these creatures' brains have many similarities in what we see in modern creatures...it suggests animals first evolved brains over 600-700 million years ago and that was the basis for what we see in most animals today.

The findings of Edgecombe and Ma will not be without their critics, as the paleontological community is divided into two camps concerning brain development. On one side are those who believe brains arose at a time before vertebrate species first diverged from less complex invertebrates. The opposing group argues that brains appeared in multiple species — possibly as many as eleven — at roughly the same time.

The disagreement is not likely to be settled unequivocally any time soon, but Yunnan will very likely continue to contribute to the debate. The area where the fossils were found, referred to by paleontologists as the Chengjiang Lagerstätte, is known for its seemingly endless trove of ancient fossilized life, collectively referred to as Chengjiang Fauna.

The site is located 50 kilometers southeast of Kunming and is considered one of the best places in the world for scientists to conduct research on the Cambrian explosion, a historical epoch characterized by the rapid appearance and diversification of complex organisms.

Pics of the actual fossils. They're tiny.

I know this article is talking about me. It says that old fossils have brains.

Shrimps have brains too. It's good I rip off their little heads then before eating.