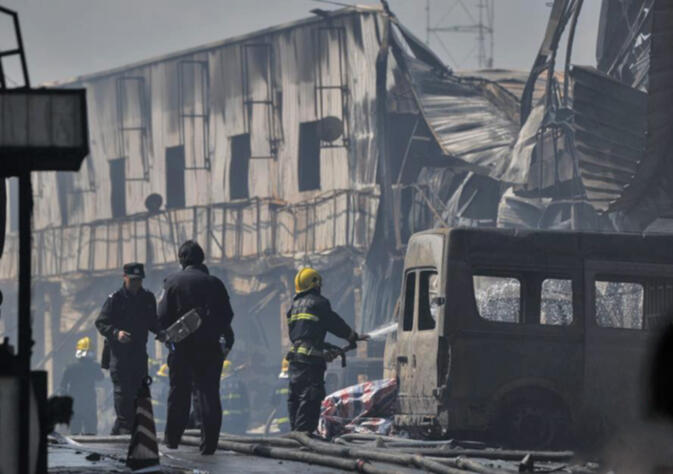 A fire that broke out in a Kunming wholesale market on the afternoon of March 4, claimed the lives of a dozen people and destroyed 50 businesses before being extinguished. Investigators are now combing through the wreckage in attempts to discover the source of the blaze, which witnesses say began with a loud explosion.

Whatever the cause of the first flames, shop owners at the Kunming-ASEAN Abundant Agriculture Trade Center (昆明东盟联丰农产品商贸中心) in Guandu District, said the fire quickly spread when it engulfed a storage space full of industrial alcohol. More blasts, reportedly shattering nearby car windows and sending flames shooting ten meters into the air, claimed several other businesses in a matter of seconds.

The conflagration then spread from business to business along the market's closely built lanes. A number of merchants and their customers became trapped inside the buildings and were forced to climb out of second and third story windows to escape the flames. 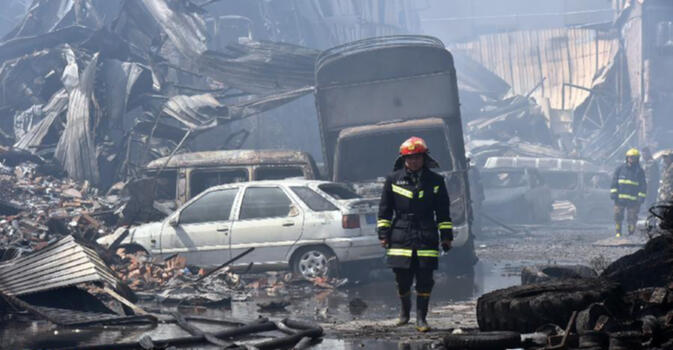 Eleven separate fire departments responded to emergency calls, and eventually 36 firetrucks and 157 emergency and police personnel arrived at the scene on Caiyun Lu (彩云路). Firefighters managed to bring the blaze under control four hours after the fire first began. Paramedics treated dozens of injured people at the scene and transported another 12 to a nearby hospital, where three reportedly died of smoke inhalation and burns.

Investigators using rescue dogs later recovered another nine bodies from the wreckage. Although the cause of the blaze is still under investigation, firefighters told reporters the situation was exacerbated by closely packed storerooms containing all manner of combustable materials. The initial ferocity of the fire was apparently fueled not only by stores of alcohol, but also by a stockpile of car tires inside a neighboring automotive store.

In all, some 3,300 square meters of the market were destroyed or severely damaged by fire and smoke. Yunnan's vice-governor, Zhang Taiyuan (张太原), was placed in charge of overseeing a police investigation as well as an overall property damage assessment. As of this writing, a preliminary government ruling deemed the fire accidental.

Must of been huge. 36 fire trucks.

probably started by a firework

I was thinking the same thing. I'm surprised there have not been a lot of fires started by fireworks when they set off the rockets within 3 minutes of the tent where they are stockpiled and sold.