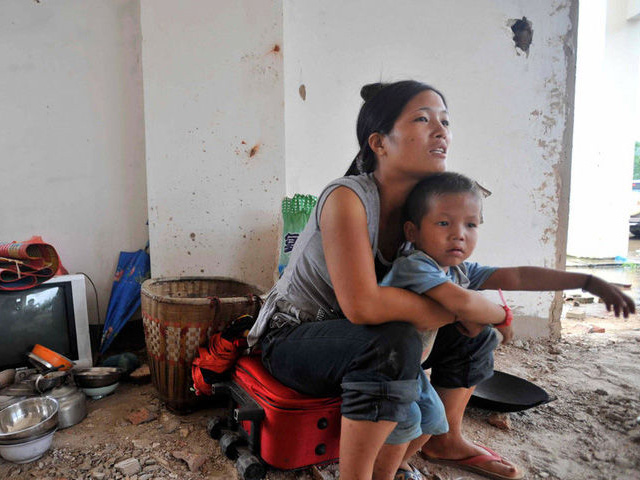 File photo of Kokang refugees in China from 2009

Renewed fighting between the Burmese military and a guerrilla army in Myanmar's northeastern Shan State erupted once again this week. The violence has caused civilian refugees — by some estimates more than 10,000 people — to flee across the border into rural areas in China's Yunnan province.

Hostilities broke out on Monday in Kokang, a self-administered zone with a population estimated at 150,000. An article posted on Burmese news website The Irrawaddy reports fighting was most intense near the town of Laukkai, located on the Salween River — known in Chinese as the Nujiang. Refugees were headed to the opposite side of the river to the village Nansan (南傘) in Lincang Prefecture.

The location of Myanmar's Kokang region shown in green

The Burmese military attacked areas held by the Myanmar National Democratic Alliance Army (MNDAA), the armed wing of the Kokang ethnic group — 90 percent of whom are of Han Chinese ancestry. Bombing has been concentrated nearby Laukkai using Russian-made jet fighters and helicopters during the day and artillery during the night, according to MNDAA general secretary Htun Myat Lin.

He also claimed the number of refugees fleeing into China was approaching 10,000 as of Tuesday, most of them Burmese villagers, with a small minority made up of Chinese merchants. Chinese media have so far not estimated the number of displaced but Foreign Ministry spokesman Hua Chunying was quoted by CCTV as saying:

China is concerned about the Myanmar situation. During the past two days, some Myanmar border residents, because of safety considerations, have entered China. They have been looked after. China will continue to pay close attention to how the situation develops, and maintain the peace and stability of the China-Myanmar border. We also believe that the Myanmar side should also work hard for this.

State-backed Burmese news outlets have yet to release reports regarding casualties from the fighting. No official reason has been given for the escalation in violence, although it seems likely the actions by the Burmese military are connected to December ambushes by Kokang guerrillas that killed at least seven soldiers and injured 20 others.

The current situation along the border closely mirrors a monthlong period in 2009 when an estimated 30,000 Burmese civilians from Kokang crossed into Yunnan in the wake of fighting. China dealt quietly with those displaced by fighting six years ago, instituting a near media blackout of its humanitarian actions.