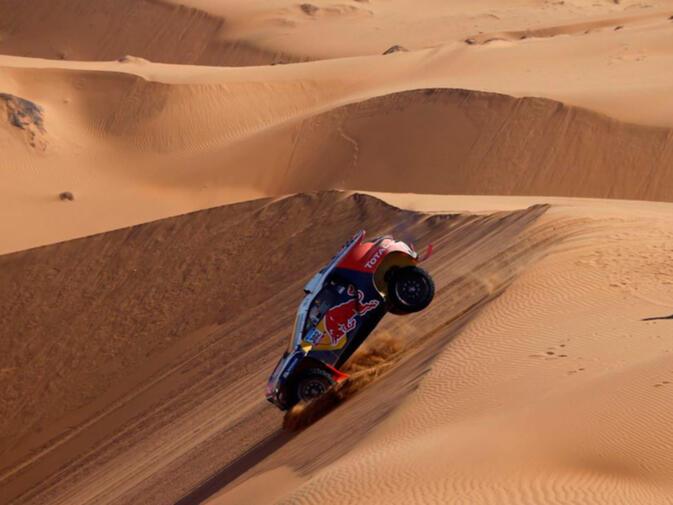 Today, January 9, participants in the 2015 Dakar Rally begin stage six of the race, a grueling 600-kilometer course through the Atacama Desert in Chile. Multiple teams across all vehicle classes have already abandoned their chances of winning or otherwise exited the competition.

The two cars from Kunming team China East Racing continue to compete but are having a hard time of it. At the finish of stage five on January 8, the car piloted by tandem Zhong Lei (钟磊) and Ma Miao (马淼) sat in forty-eighth place, while their compatriots Liu Kun (刘昆) and Liao Min (廖岷), were right behind in forty-ninth. These rankings place them near the middle of the pack, as 85 teams began the race on January 4.

The pair of Liu and Liao have been particularly hampered by a lingering spine injury Liu suffered in May while driving in the the Takalamakan Rally. As with all competitors in the rally, falling behind from the start leads to excruciating circumstances where drivers are not only required to compete in each day's heat, but must also assist mechanics on repairs once they cross the finish line — sometimes a few hours after the leaders.

"For the past several days the drivers of both our cars have been getting two or three hours of sleep each night," says team manager Anthony King. "Just checking the cars everyday for damage and making sure everything is functional takes more than an hour. Then you have to fix all of the problems you find. It's a pretty difficult cycle." Both teams hope to get some much needed sleep during a scheduled rest day this weekend.

As for the other Dakar competitors of note, Qatari driver Nasser Al-Attiyah and his Mini team lead the overall standings after five stages. Perhaps making more headlines than any of the current leaders is news of the mysterious death of one of the motorbike riders, Michal Hernik of Poland.

The driver was found hundreds of meters off the race course by an emergency helicopter crew after he failed to finish on day three. Hernik's body was discovered next to his undamaged bike. He had apparently removed his helmet but showed no outward signs of injury. An autopsy is currently underway. The driver's death cast a pall over a motorcycle competition that was to be a two-week celebration for Yoshimasa Sugawara of Japan, who is competing in his thirty-third straight Dakar Rally at the tender age of 73.