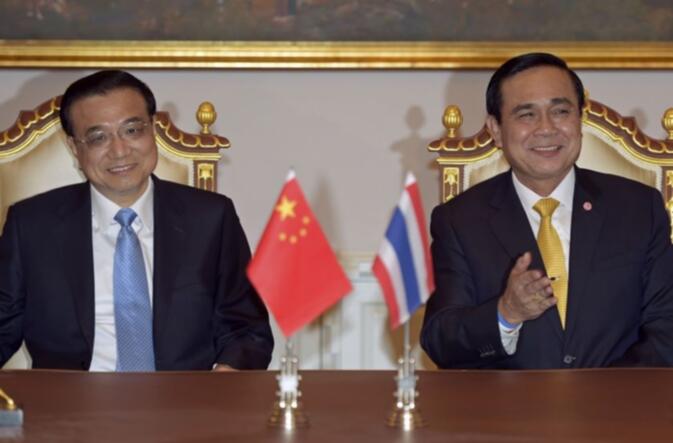 In the run-up to weekend meetings by countries composing the Greater Mekong Subregion (GMS), representatives from the Chinese and Thai governments signed bilateral agreements worth more than 62 billion yuan (US$10 billion). The trade and development accords are yet another instance of Beijing engaging in a soft power approach to diplomacy with its Southeast Asian neighbors.

The signing ceremony was attended by Chinese Premier Li Keqiang and Thai Prime Minister Prayut Chan-o-cha. The memoranda of understanding they approved involve Chinese funding for the joint construction of two railroads in Thailand. As a sweetener, China also agreed to buy two million metric tons of rice and 200,000 tons of rubber, helping the Thai government liquidate swelling stockpiles of the products.

Work on both railroads is expected to begin in 2016 after survey and logistics planning are finished. One railway will connect Bangkok to Kaeng Khoi in central Thailand. The line will extend for 133 kilometers and will be a key junction once construction is finished on a series of separate railway upgrades planned across the country costing and estimated US$23 billion.

The second, perhaps more important, route will run south for more than 700 kilometers from Nong Khai in the country's northeast to deep water ports in the southeast. Once completed in 2022, the railroad will be of key strategic importance to southwest China in general and Yunnan in particular.

For more than 20 years, Beijing has unwaveringly called for a railway linking Kunming to Singapore — a plan hoped to strengthen China's influence and business dealings in Southeast Asia, while simultaneously invigorating Yunnan's economy. However, the Thai railways will take nearly a decade to complete and the additional necessary links through Laos are nowhere near realization. Bogged down for years by funding issues, scandal and logistical setbacks, construction on railroads through Laos planned to link southern Yunnan to Thailand currently have zero funding.

The Thai-Chinese agreement was just one part of a busy month for Chinese Premier Li. He is spearheading an effort to improve his country's relationships with its southern neighbors after a contentious summer involving multiple territorial disputes in the South China Sea, some of which turned deadly.

One day after securing the railroad contracts in Bangkok, Li offered 18.6 billion yuan (US$3 billion) in other loans to Cambodia, Laos, Myanmar and Vietnam for "infrastructure, poverty alleviation and production capacity", Reuters reports. One month earlier, while in Myanmar for a summit of the Association of Southeast Asian Nations, Li extended 124 billion yuan (US$20 billion) in loan offers to GMS countries.

So will it be possible to go the Chiang Mai by train?

If & when they get the RR link through Laos built, yes, but I wouldn't hold my breath.