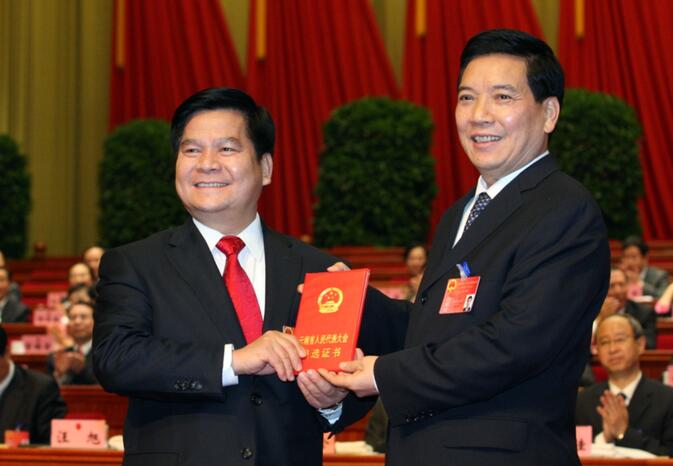 Out with the old (right), and in with the new (left)

The government of Yunnan completed a reshuffle of its top members a bit more than two and half years ago amid some confusion. At the time, Kunming's golden boy party secretary, Qiu He (仇和), received what appeared to many to be an improbable demotion. It's déjà vu all over again as the Communist Party's top man in the province has been relieved of his office without an accompanying explanation.

During a high-level meeting of provincial party cadres held October 14 in Kunming, it was made public that Qin Guangrong (秦光荣), party secretary of Yunnan, would be replaced by sitting governor Li Jiheng (李纪恒). Generally, such power handovers are quickly followed by news of a departing bureaucrat's next job posting. In Qin's case, no such announcement has been forthcoming.

The news seems all the more odd because until very recently, Qin was tabbed by many to be in line for a promotion to Beijing. The South China Morning Post is reporting that before Tuesday's meeting, "speculation was rife [...] that he could become deputy head of the party's Working Committee of Organs Directly Under the State Council."

Qin's departure was conducted without any apparent rancor and the outgoing party boss gave a lengthy speech in which he said he was thankful for his 16 years of public service in Yunnan. He first arrived in the province in 1999 after a governmental stint in Hunan. Qin was then named governor in 2007 and provincial party head six years later.

The newly anointed Li also addressed the meeting and thanked his predecessor for what he deemed Qin's "practical" approach and "heartfelt and sincere" service. Li also took the time to welcome his heir-apparent and relative newcomer, Chen Hao (陈豪). Chen had previously been deputy-head and party secretary of the All-China Federation of Trade Unions (中华全国总工会), the largest organization of its kind in the country.

Qin's time in office will most likely be remembered for environmental issues. During the entirety of his time as provincial party head, Yunnan suffered from a recurring and often crippling drought. Qin was a vocal proponent of rerouting water from the Jinsha River (金沙江) towards Kunming in the dual hope of alleviating city water shortages and flushing away the algae blooms that have become a permanent feature of Dianchi Lake.

The secretary also had a hand in aggressively implementing Beijing's Bridgehead Strategy — a multifaceted program aimed at strengthening the province's economy through international business and trade. However, when all is said and done, history may judge Qin guilty by association with several governmental colleagues — including his predecessor — who have recently been embroiled in corruption scandals.

could be that he has been found to be corrupt but has a very powerful patron who would be guilty by association so he has to leave quietly in return for not being punished.

or it could be the opposite: that his patron is someone that considers a threat and so, using the incredibly inefficient, slow, (and rather cowardly) method that Mao himself used to use, someone very high up is undermining somebody else high up's support network from below.