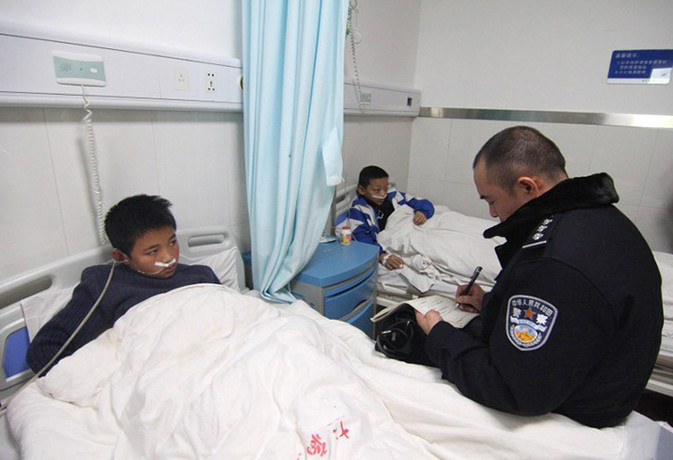 On Friday, September 26, a 'stampede', reportedly caused by misplaced cushions normally used in a physical education class, lead to the deaths of six schoolchildren and injured at least 26 others at Kunming's Mingtong Primary School (明通小学). Local authorities have said two trampled students remain in serious condition at a local hospital.

As of this writing, details of the tragedy from various media reports continue to be vague. Originally, State-run media outlet Xinhua reported that between 2 and 2:30pm on Friday, a lunch break accident occurred when a group of students "were playing with a large cotton cushion" which then fell on top of several smaller children. A general panic erupted afterwards, with several students running over the cushion itself, causing severe injuries, according to the account.

Other initial reports claimed two mattresses fell onto children while they walked down a stairwell after a scheduled nap. The resulting rush to flee further down the stairs caused more children to run over the cushions, unaware that some of their classmates were trapped beneath.

No concrete detail-oriented accounts have yet elucidated what exactly happened at the school. However, it now appears the 'official' story' is that a mass of 600 students rushing from a scheduled nap to class inadvertently trampled several of their classmates in a packed dormitory stairwell. The killed and injured children apparently tripped over a misplaced cushion, fell underfoot and were crushed as their classmates streamed down the stairs.

Bereaved parents of the deceased pupils staged a memorial parade at the school on Sunday. They carried flower wreathes, photos of their children and a sign reading "The killers should be severely punished". Officials at the Kunming Education Bureau sacked or suspended seven administrators over the weekend, including its own deputy director and the head of education in Panlong District (盘龙区), where the accident took place. It was also announced that the families of those killed would each receive payments of 800,000 yuan (US$130,000).

Regardless of what exactly led to the tragedy, general safety standards of schools have been called into question by netizens across the country once again. Such discussions only intensified when news broke the same day of the Kunming incident that four elementary school students in Guangxi province had been stabbed to death by an unknown assailant. When approached for comment by Xinhua, professor Zhou Ning of Yunnan Normal University stated that "schools should pay more attention to safety education, and make sure all students know how to cope with emergencies."

Chinese law limits primary school class sizes across the country to no more than 45 students. However, this statute is often not enforced, especially in rural schools and prominent urban academies with reputations for excellence. Overcrowding is not the only issue of concern for parents. A national lunch program came under intense scrutiny in 2012, when thousands of rural students, many of them in Yunnan, suffered severe food poisoning after eating at their school canteens.

Mingtong School — located in central Kunming near the intersection of Beijing Lu and Dongfeng Dong Lu — is considered one of the best primary schools in the city. At the time of the tragedy, it may have been overcrowded due to its public standing and commensurate enrollment demands. An investigation is still ongoing into exactly what caused the stampede and how it could have been prevented.

Editor's note: This article was originally published on September 27, under the title 'Six children killed in Kunming primary school panic'. It has been rewritten to include details that emerged over the weekend. 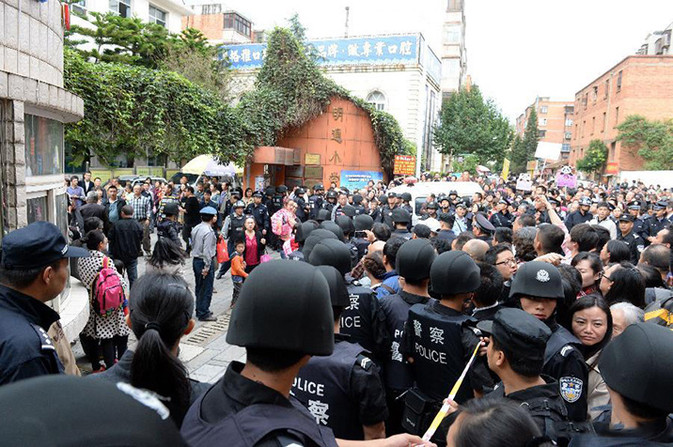 Where is the first aid personel for this school? that's if they have any..
Profit is the reason for this accident, craming so many in one school.
Another aspect of corruption is that I assume these schools are protected from new schools opening.Again, profit as a motive..

China has a long way to go if it wants to intergrate with the rest of the world...it's respect for others is truly non existant.

@Mike: 'China' didn't do this - 'China' doesn't have or not have respect for others - and who are the 'others' that you might be referring to, and what do they have to do with this tragedy?.

If I interpret Mike correctly, he is referring to general attitude of average Chinese person toward other human beings, nature, and generally everything other than himself and his immediate family.

For long time China was poor country, and it still reflects in many parts of the society. One is, that average Chinese will always put his own survival and benefit first.

@Jan Jal: I agree that the flip side of the Chinese identification with the family often means a certain relative lack of regard for those who are not of the family. I don't know that this has anything to do with poverty. As for putting one's own survival and benefit first, that sounds like most people. But I'm not sure the school tragedy can be reduced to this.

The staff of the school, from the top to the janitor, was trying to increase their profits by not implementing proper storage for the sleeping mattresses.

In extreme poverty, people will even limit survival to that of their own person.

This has been reported, for example, from DPRK prison camps with family members turning on each other to survive.

In today's China you cannot make this comparison to DPRK, but China's history has left its marks in people's behavior today.

could be, JanJal, but a lot of very rich people make a point of making a profit out of the situation of very poor people too - and they've got the money to do it efficiently.

Huge profit is the main focus instead of having a proper educational system. Pure greed.

If the officials in charge of education allowed sufficient number of schools it could be managed, but instead they limit the amount of schools creating a high demand and price gouging;
way off the ethical charts for a socialist country, let alone doing their public duty. These well placed officials and school owners only focus on profit; high profit.

This is the example of "not respecting others" in my original post, placing high profit ahead of public education and only taking care of their friends whom own the existing schools...

Indirectly these well placed people are responsible for this accident.

Look at the facts.
Do you really think no one wants to open new schools?

Do you really think schools would be starving for students and money if the Gov allowed new schools??

Of all the schools in Kunming, how many are run on a profit-making basis? My guess is that most are not.

In one way or another isn't everything for profit in China.

@tallamerican: No, I don't think so, although you're right, a lot of things are.

My daughters middle school principal was removed for graft. That was in Shanghai in about 2006.
We had to pay 20 000 rmb, and a watch to get my daughter into the school. This was not a special school by any means. We had just moved into the city mid-year.
Students were told that they must have English tutoring. The tutor was the brother of the head of the English dept. It was 100rmb per student per hour (in 2005), about 2 hours per week. Now that doesn't happen without the principal knowing about it.

I see - bribery to get into elite schools - doesn't surprise me.

I see - bribery to get into elite schools - doesn't surprise me.

It was the local middle school. Not even that high in the rankings.

If a school is high in the rankings I am sure parents who are not from that district of the city can find a way to get their children in.

Schools in Kunming do the same thing. It's so bad many schools make them sign a document stating they aren't being forced to attend the "extra" classes... yeah, right.

So that's why people are parked outside the fancy new middle schools from 9pm to 10pm.

How would one go against this? Where to complain formally and how?

I understand that for many there isn't much choice, but what about those who have?

@tiger: sounds curious, education is compulsory through middle school, and is essentially free - i.e., for Chinese students, the law is that they MUST go to school, therefore some school MUST accept them. Do you think this happened because your daughter is a foreigner? Or another theory?

Is this sort of school corruption being targeted in the current anti-corruption campaign?

Ha haaaa, wow, pretty amazing tiger, but not at all surprising.

In countries such as my own (the UK), you could just go to the local council or newspaper and tell them about anyone wanting to take a bribe. That would probably be the end of that person's career, at least in that town. They'd have to be extremely well connected to escape some kind of sanction. There is corruption in the UK, but it isn't as widespread and accepted as in China.

Yeah by "those who have a choice" I was referring to people who could pack up their family and leave the city or even the country if must. Should such people want to report about apparent corruption (would have to be first hand experience I guess) in education system, where would they do it in Kunming?