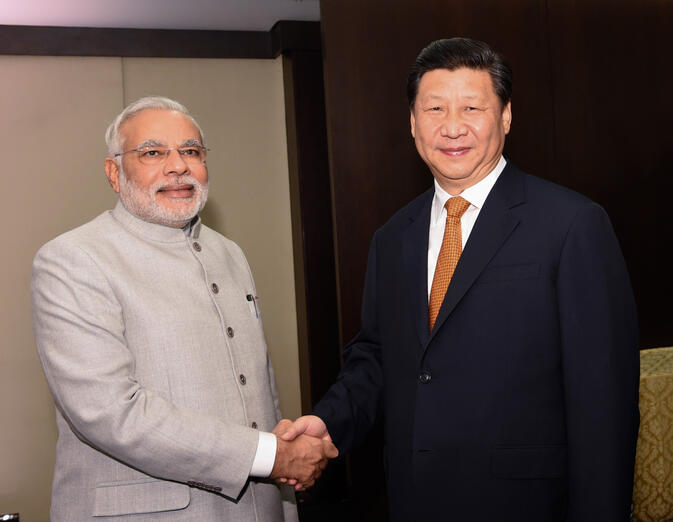 Chinese president Xi Jinping arrived in Gujarat, India on September 17, kicking off a three-day trip to the Subcontinent. As he did a little more than a year ago in Beijing with Manmohan Singh, Xi will push his recently elected counterpart, Prime Minister Narendra Modi, to move forward with a planned trade corridor connecting Yunnan and eastern India.

Before any progress can be made, the two leaders must discuss disputed borderlands in the Himalayas — almost always the first hurdle to be cleared when China and India hold high-level meetings. Although both countries signed the 2013 Border Defense Cooperation Agreement, in which they pledged not to resort to the use of force in future quarrels, permanent international boundaries on the 'roof of the world' remain unresolved.

Assuming border talks are amicable, discussion will turn to the Bangladesh-China-India-Myanmar (BCIM) trade corridor — an oft-broached but never implemented economic proposal which would link Yunnan's capital to the Indian port of Kolkata. So far, India has only agreed to 'joint-research' of the scheme, which the two countries have been batting back and forth for a decade and a half.

As seen by Xi, the BCIM corridor would be a network of highways and railroads linking impoverished but resource-rich areas in all four countries, and thus spur mutually beneficial economic growth. It also folds nicely into Beijing's Bridgehead Strategy — a 15-year effort to transform Yunnan into an international trade and communications hub linking China to South and Southeast Asia.

In India, considerations over BCIM remain a bit less cut and dry. India's Modi swept to power earlier this year largely by convincing the electorate he would build the country into a world economic powerhouse. Whether he believes this includes strategic partnering with China, as opposed to direct competition, remains to be seen.

And then there are the myriad barriers the BCIM corridor must clear that exist outside of China and India's historic mistrust. Perhaps most importantly, is the question of where the highways would actually be built. Then, there is the matter of a 65-year long civil war in northern Myanmar, which could obstruct the building of large swathes of highway — itself a microcosm of concerns regarding the lack of cohesive region-wide infrastructure as well as concerns over territorial security.

Political factors must also be considered. Beijing has recently been riling up many of its neighbors, in one case opening the door for India to reap the benifits. The Subcontinent's growing ties to China's long-time ally Vietnam may be an unforeseen stumbling block in BCIM negotiations. Bangladesh will, of necessity, also play an important role in the trade corridor. But, as yet, the river delta country is struggling to integrate its burgeoning economy with those of China or India in a meaningful way.

Undaunted by all of these complications, China presses on. Reviving ancient silk routes appears to be a hobby of Xi Jinping, who is currently spearheading negotiations with a host of countries on three separate international trade corridors all linking the Middle Kingdom to Central and South Asia.

Just before arriving in India to discuss BCIM, Xi visited Sri Lanka to promote a 'maritime silk road', offering funding to build deep water ports in Colombo and the Maldives. Xi also traveled to Tajikistan recently and stepped up efforts surrounding the Silk Road Economic Belt — yet another trade corridor, this time linking China to Russia with longterm plans to establish overland routes to countries in Europe.