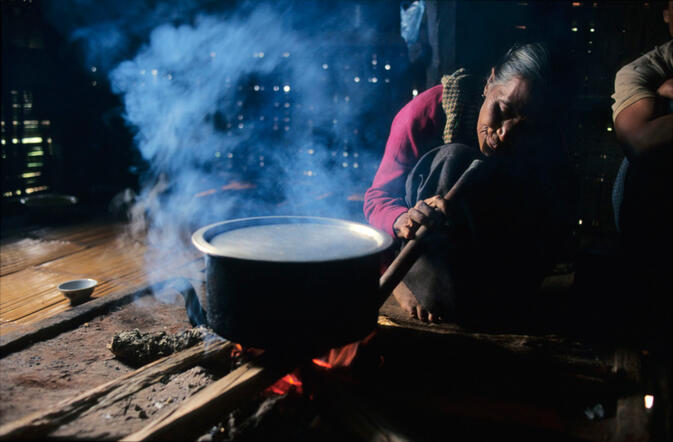 Editor's note: The article below was written by Cynthia Lee and originally published on the McGill University website. It is republished here in its entirety.

Black carbon pollutants from wood smoke are known to trap heat near the earth's surface and warm the climate. A new study led by McGill Professor Jill Baumgartner suggests that black carbon may also increase women's risk of cardiovascular disease.

To investigate the effects of black carbon pollutants on the health of women cooking with traditional wood stoves, Baumgartner, a researcher at McGill's Institute for the Health and Social Policy, measured the daily exposure to different types of air pollutants, including black carbon, in 280 women in China's rural Yunnan province.

Baumgartner and her team focused on the health effects of air pollutants that are emitted from sources that are common in developing countries. "China's unprecedented economic growth is fueling massive increases in industrial and motor vehicle pollution, and 700 million Chinese homes still cook with wood and coal fuels. The Chinese government is setting new targets to improve its air quality. We wanted to identify the pollution sources that most impact human health to help inform these pollution control efforts." says Baumgartner.

"We found that exposure to black carbon pollutants had the largest impact on women's blood pressure, which directly impacts cardiovascular risk. In fact, black carbon's effect was twice that of particulate matter, the pollutant measured most often in health studies or evaluating cleaner cookstoves," says Baumgartner. "Black carbon from wood burning is considered very important for climate warming. Our research shows that it may also be an important pollutant for health."

In addition, the researchers found that women living closer to highways and exposed to both wood smoke and traffic emissions had three times higher blood pressure than women who lived away from highways.

Adds Baumgartner, "We found that black carbon from wood smoke negatively affects cardiovascular health, and that the health effects off wood smoke are exacerbated by co-exposure to motor vehicle emissions. Policies that decrease combustion pollution by replacing inefficient wood stoves and reducing traffic pollution will likely benefit both climate and public health".

When will those gender gender gender....sorry...feminists go and check the workers condition on the 5000 meters passes by the way.

Have people been to village houses before where they use the round compressed coal pellets for heating/cooking? These are coal pellets filled with holes, about the size of a large mans fist.

Whenever I am around them I pretty much begin choking! The particulates and toxicity of these things I suspect is pretty high as well.

Unfortunately going electric in Yunnan (likely producing most of its electricity from hydro) seems to be the best way for heating, when taking into account the environmental and human health factors. At least if people light these type of unventilated (no chimney) fires...

I agree with bobbles.

Introducing stoves with a proper chimney or it's technology would be a proper route....

if they want to reduce wood fires they should ban burning crop leftovers.

I have heard of several cases of older people becoming brain damaged from burning those round charcoal coal pellets for heat in the winter. Apparently they are toxic as hell.

i dont think those black beehive like things are even coal. every time i pass the coal fueled sweet potatoe stands or barrel cookers i cough to death. in my home country we use enclosed coal cookers for bbq, and they have ash these black beehive things never have ash. they are covered in fuel. pretty sure they are ceramic.