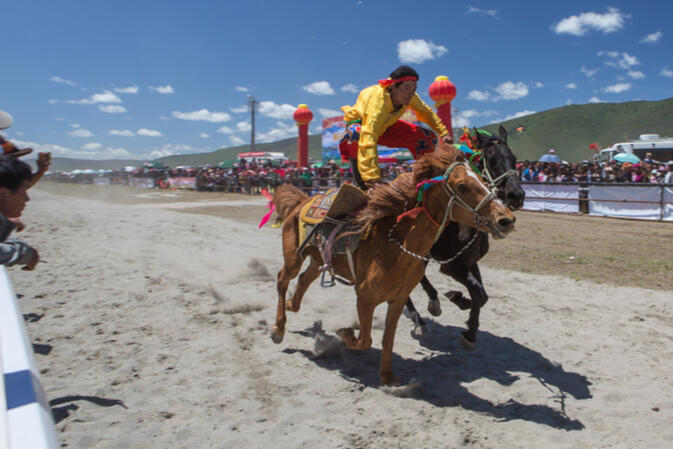 Editor's note: GoKunming contributor Adam Crase is an American photographer based in Guangdong province. He travels extensively in China in search of unseen angles and perfect shots. Crase recently published his first book — a large format collection entitled "Dongguan, China 中国东莞". More of Crase's images can be seen at his website Kung Fu Imaging and he can also be found on Facebook (requires proxy). 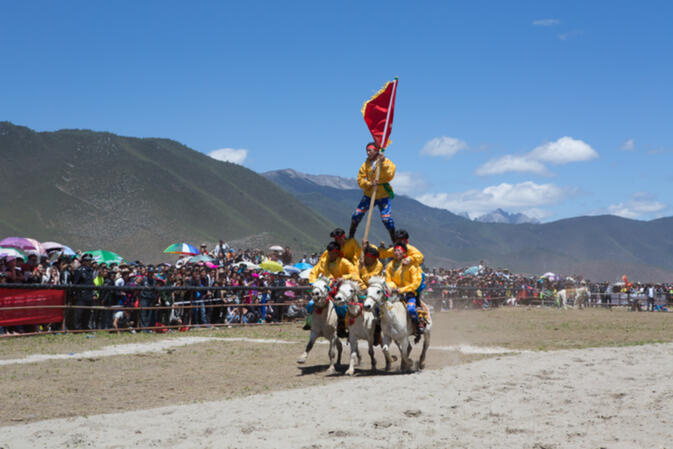 Yunnan's largest Tibetan horse racing festival — called Saima Jie (赛马节) in Chinese — is held just outside the city of Shangri-la (香格里拉). When last we attended in 2012, it was staged inside a purpose-built stadium erected by the government. The festival has since moved to a more fitting and bucolic venue, outside in a grassy valley. 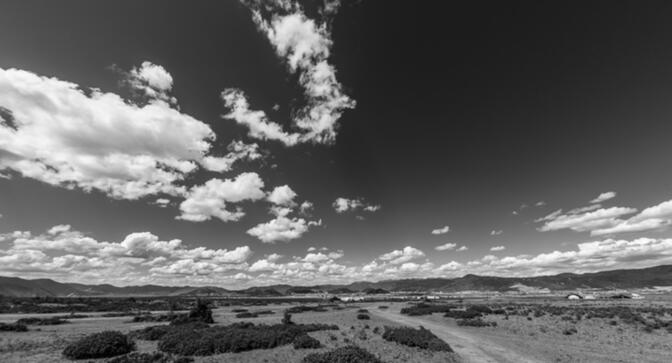 The three-day event now takes place in the foothills of Shika Snow Mountain (石卡雪山), a massif which soars to heights of 4,449 meters above sea level. Festival-goers were greeted by perfect weather and azure blue skies this year as they congregated in early June. 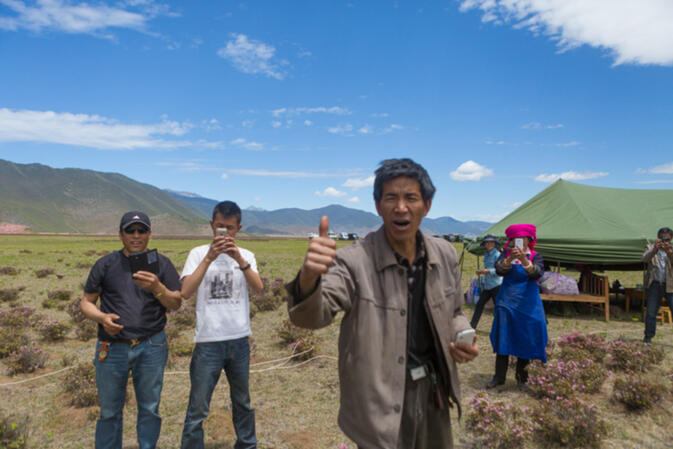 Families often arrive to the festival a week early to set up tents, horse stables and family meeting areas. Once settled in, many of them were as eager to take photos as we were. 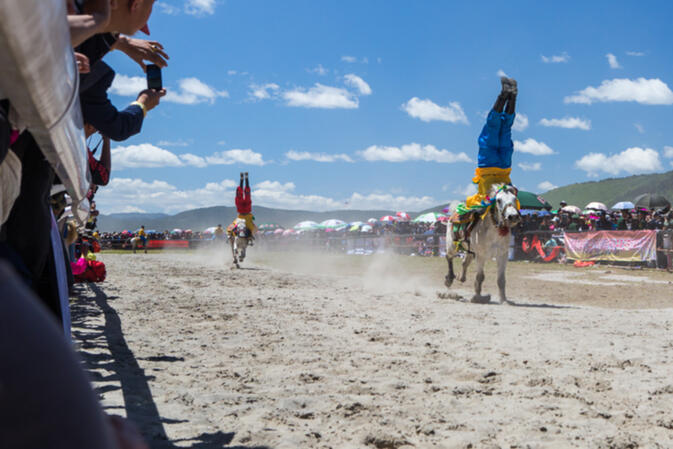 The build-up to Saima Jie is a slow one. Tents and pavilions grow more and more numerous in the days leading up to the opening ceremony as people anticipate the upcoming races and what are sometimes mind-boggling feats of horsemanship. 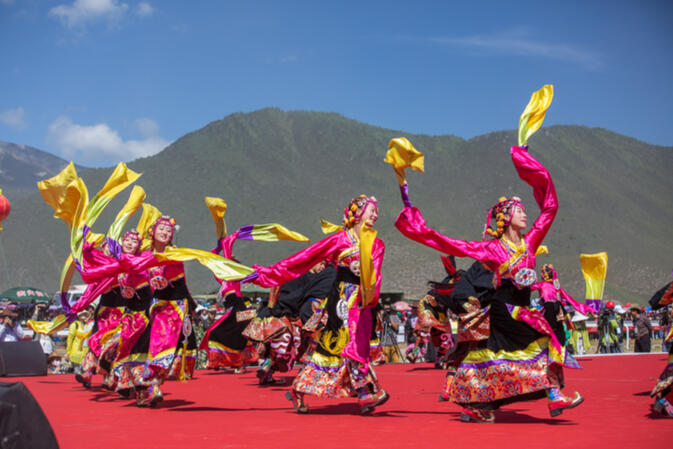 Although the festival definitely centers around horse riding, other aspects of Tibetan culture are just as important. Traditional singing and dancing performances are both integral parts of the celebration. 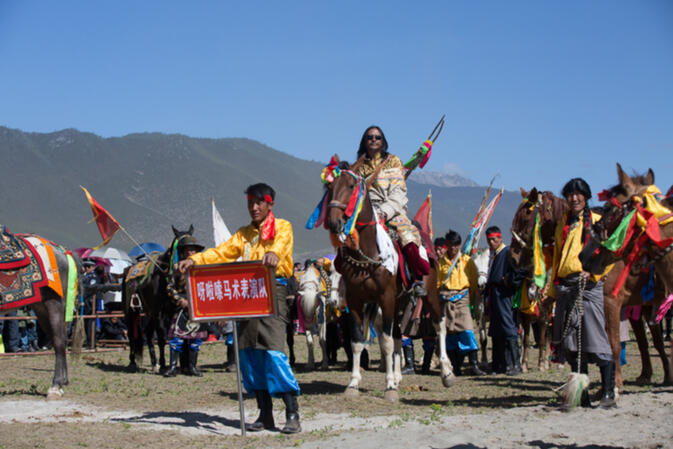 A parade of horses starts off the entire affair. In 2014, it was led by a gentleman in sunglasses riding atop an enormous horse that dwarfed the smaller Tibetan ponies. 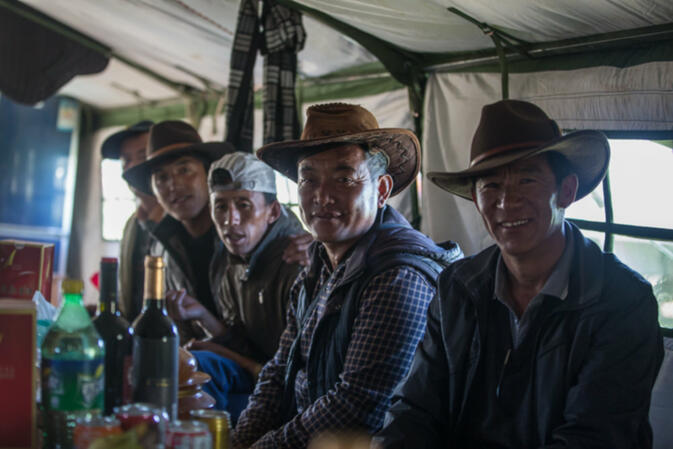 During downtime between parades, performances and races, people return to their family tents to socialize, sip on yak butter tea or beer and share meals. This group of cousins are all jockeys and horse trainers. Everything at the festival is fairly self-contained. Families cook meals together, fodder for horses is trucked in and the largest tent of all is a communal shrine where people can pray and give offerings to any or all in the panoply of Tibetan deities. Two elderly women make their way through the scrub brush. After a rest, the pair was heading from their family's tent back to the main horse track to watch the races. 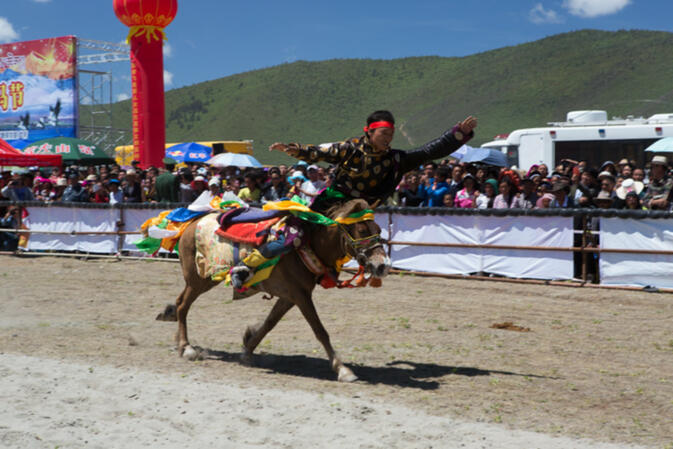 Trick riding and skills competitions are both crowd favorites at Saima Jie. Here, a rider sees how far he can reach in front of his galloping mount without falling. A cowboy, Tibetan style. The festival isn't all fun and games. Someone has to look after the horses, make sure they are properly ornamented, shod and saddled before they head out to the performance area. Detail of a hand-wrought saddle. Traditional finery is not limited simply to the human participants at Saima Jie. Just as important, and often more ornamental, are the saddles and other tackle sported by the ponies. A rider shows off his skills, dismounting to the side and letting his feet ever-so briefly touch the ground before bounding up and over the horse to accomplish the same feat on the other side. Dancers put on a coordinated performance. Their bright outfits are often embellished with embroidery. Costumes, including caps adorned with pheasant feathers, are handmade — except, of course, for the store-bought running shoes. Although not shy on stage, this woman tried to cover her smile as she took a break from the sun between performances. We could not, for the life of us, figure out why this guy rode leaning back as far as he did. Other onlookers had no explanation either, although they did admire the top-speed performance. Saima Jie is celebrated each year beginning on the fifth day of the fifth lunar month, which corresponds to June 20 for the 2015 iteration. Not coincidentally, early summer is one of the best times to visit Shangri-la, as the meadows are filled with wildflowers after a long winter's sleep. I think it was last year that there were massive numbers of cops and military at this event - how about this year?

The photographer for this article, Adam, said it was exactly the same this year. Plenty of military and police on hand.

Was the rider leaning back to reduce drag, perhaps?

these two girls are cute, the cops are just for safety, you don't need to take care for wonderful event.

Question is, who's not safe, and why not? Last year I heard of local people showing up for 'their' event, seeing all the security and then turning around and going home.

Actually cops appears everywhere in some parts of China. Partly because the government really afraid of ANYTHING that may harm the stability of our society. In another word, this do not only appears in Tibetan areas( this festival actually was held in Yunnan), any public activity makes our government feel frighten. It seems that anything will destroy our government.

fantastic photos. Are foreigners welcome at these events or is it Tibetans only?