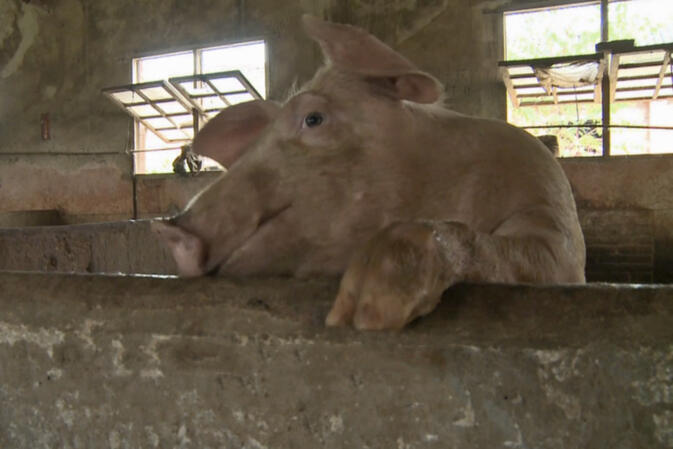 Editor's note: A free screening of 'What's for Dinner?' will be held at The Elephant Books on August 17. Beginning at 3pm, the presentation is one in a series of lectures entitled 'Marin's Food Talks' organized by Marin Toscano. In addition to the screening, the event will involve a discussion on the challenges of eating healthy as a modern-day consumer. Space is limited and advanced reservations can be made by calling 18687530318.

China's gross domestic product per capita has risen 350 percent in the past decade, according to World Bank statistics. Such an increase in wealth has led to an enormous spike in consumer spending, as a population once steered toward frugality and homogenization is now flexing its capitalist muscles. Perhaps nowhere is this growth more obvious than in the realm of food, where meat — especially pork — is being bought and sold at astonishing rates.

Huge and still-growing demand for pork products has spurred farmers and breeders to raise more pigs. But can the planet handle Western-style food consumption in the world's most populous nation? That question is central to a documentary released this summer by Brighter Green entitled What's for Dinner?, which explores China's rapidly developing industrial food sector through the lens of pig farming.

The film begins, as perhaps it should, with a woman as she visits the market. The scene takes place in Jiangxi province's Ji'an City (吉安), and is, for all Chinese, an instantly recognizable snapshot — a bustling, cacophonous place where vegetables and meat are sold side-by-side without refrigeration. The narrator is a retired pig farmer, and through a voice-over she explains which cuts of pork one should buy to avoid places where pigs are given injections of antibiotics.

From there, the scene shifts to the pig farm where the woman used to work. It is a relatively modest affair and the current owners are shown feeding and cleaning their pigs and also taking them for a walk. Their main concern, they say, is the sustainability of their operation. Pork prices experience wild swings and factories raise animals far more quickly than can average farmers.

This refrain, that smallholders are being squeezed out, is repeated many times throughout the documentary by many different people. Small-time pig farmers are losing market share and envision a future when their businesses can no longer thrive unless they are expanded, mechanized and begin utilizing hormones to make pigs grow more quickly. The retired farmer, who first began raising pigs in 1963, explains:

And herein lies the crux of What's for Dinner?: is there room for smallholders and independent farmers who utilize traditional methods in a system increasingly dominated by agribusiness, and if not, what are the consequences? Besides farmers, the filmmakers interview a vegetarian rock star, a broker who purchases pigs, a restauranteur, activists and a surprisingly candid Beijing bureaucrat.

Many of these people are concerned with China's current trajectory of ever more mass consumption and what it means for their country and the world. Despite its short, 28-minute run-time, the documentary manages to raise a host of questions involving health, sustainability, pollution and food scarcity — all of which are fundamental to China's future. It also provides intimate access to people and places most consumers would otherwise never see.

What's for Dinner, then, is as much about pigs and the rise of factory farming in China as it is about the growing discussion about that rise amongst the general population. It is a conversation well worth having.

interesting event. Everyone should be more aware about this topic. About the 2.000 kind of drugs contained in a common piece of meat for e.g.

Other than the ocasianal bacon, I'll stick to chicken.

I eat meat of all kinds and love it, but we'll all be vegetarians soon (well, not this week).

"but we'll all be vegetarians soon..."