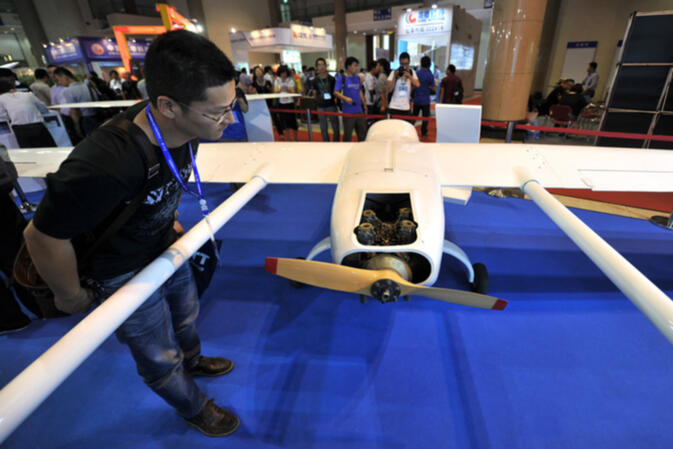 The United States' extensive use of drones may capture headlines around the world, but many other countries are aggressively looking to develop their own, domestic forms of the technology. China is no exception, encouraging and increasingly funding small start-up companies in an attempt to foster innovation, China Daily is reporting.

The fruits of this labor were on display over the weekend, as industry leaders, experts and government officials attended the 2014 China Unmanned Aerial Vehicle Conference and Exposition in Beijing. In total, companies displayed 70 drone prototypes, most with civilian applications.

Chinese drone technology remains in its infancy, admitted Li Yong, vice president of Wuhan Ewatt Aerospace Technology Company. However, Li remains confident that the industry will do nothing but grow, saying "UAVs are increasingly used in a variety of fields, including electric power industries, disaster-relief work, as well as shooting TV programs."

Beijing very publicly announced the use of drone technology in June, when it unveiled a novel approach to curbing air pollution. Operating over cities in Hebei, Inner Mongolia and Shanxi provinces, drones monitored nighttime emissions from more than 200 factories and power plants spread out across 2,000 square kilometers.

Using infrared cameras and thermal imaging, the Department of Environmental Protection was able to identify 64 industrial facilities in violation of air pollution laws. The names of the offending businesses were then made public and company executives were ordered to limit emissions or face shutdowns.

While Beijing was holding its UAV symposium, drones were being used by rescue crews following a massive mudslide in Yunnan. Fearful that continuing rains could trigger more landslides, emergency crews elected to search for eight missing people by surveying the disaster area from the air. As of yet, this method has yielded no results.

Although attendees at the conference in Beijing stressed the future value of drones in civilian settings, the Chinese military is no doubt looking on with interest. Unmanned aerial vehicles were first publicly displayed by the Chinese government at a Guangdong air show in November 2012, but little is known of their capabilities.

Officials must have some confidence in the technology, however, as drug enforcement officers considered using a drone strike to assassinate a drug lord hiding in Myanmar two years ago. That plan was ultimately scrapped in favor of taking the man alive, which authorities did successfully later in 2012.

R/C Aircrafts, aka "drones" is big business in china but i doubt if any foreigner can get aproval from gov to opperate them since the heightened security measures.

Although if any one out there is interrested in drones for commercial use i'm available as a highly experienced and a long time pilot in R/C aircrafts...