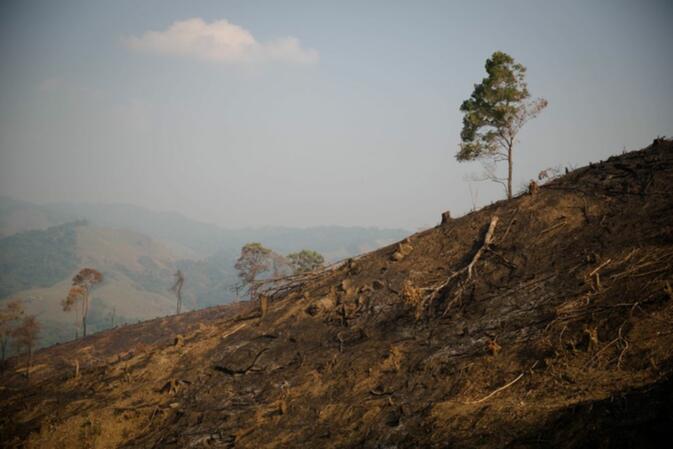 While swaths of virgin rainforests have been cleared to feed China's growing appetite for luxury wood, there are some regions, like Myanmar's remote northern forests, that have remained heretofore intact. This is about to change, predicts a new study, as loggers advance on the "final frontier" for tropical hardwoods in Southeast Asia.

A report from the Environmental Investigation Agency (EIA), published July 4, warns that soaring demand in China for valuable, endangered rosewood trees — known in Chinese as hongmu (红木) — is "completely unsustainable". Based on current trends, the two most coveted rosewood species in Myanmar — Dalbergia oliveri/bariensis and Pterocarpus macrocarpus — could be "logged to commercial extinction in as little as three years".

Recent demand for hongmu timber has spiked due to its use in high-value reproduction Qing and Ming Dynasty furniture. In 2013, China imported 237,000 cubic meters of rosewood logs from Myanmar at a value of two billion yuan (US$324 million), tripling the intake from the previous year. "Virtually overnight," reports the EIA, "Myanmar has become the biggest log supplier to China worldwide."

Seventy-eight percent of China's hongmu imports come through Yunnan, although Myanmar has banned land-border exports of raw timber. Illegal logging, however, reportedly accounts for nearly three-fourths of the country's wood exports. Financial rewards for smuggling the timber dwarf traditional incomes, and one trip, carrying up to 15 tons of timber, can reportedly earn a truck driver as much as nine million Burmese kyat (US$300,000).

A hongmu-made tea table can fetch 30,000 yuan (US$5,000) in China, where rumors of stricter import bans have led to sizable price spikes. In Kunming, where four-fifths of hongmu timber arrives from Myanmar, prices for the raw wood have risen 90 percent since this time last year. Interpreting Myanmar's export ban as an economic move, commercial website Huaxia explained:

There is an important reason why Myanmar restricts the export of raw hongmu — they are asking foreign companies to invest in Myanmar, build wood-processing factories in the country, and export finished goods, thus adding value to their timber industry.

The EIA report urges the Convention on International Trade in Endangered Species (CITES) to assist Myanmar in protecting its remaining hongmu forests. An international treaty tasked with protecting more than 35,000 plants and animals, CITES enjoys some legitimacy with the Chinese government. To save the hongmu from imminent depletion, the EIA advises CITES to take action, and upgrade the species' status to reflect that they "may become threatened with extinction unless trade is regulated".

Nothing says you've "made it" like putting once-living dead things on display.

The roads near Tengchong are ruined by the sheer number of trucks carrying logs. You can tell the trade is one way, as the side of the road coming from Burma is much worse than the direction heading back. Heavy laden trucks in; empties back for more jade or timber.

But of course the Chinese state has been extremely responsible, environmentally, for banning logging in China in 1998 - since when Chinese loggers have been raping northern Myanmar.