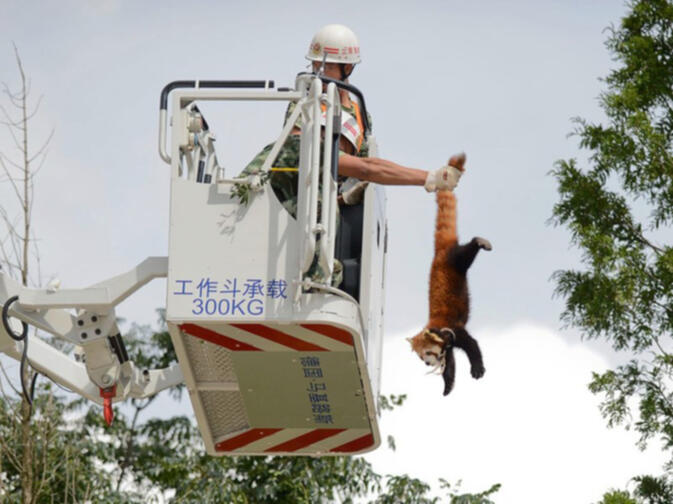 News of angry cows loose on the Second Ring Road or herds of goats blocking traffic in Kunming are not particularly uncommon. But when rare or wild animals turn up, social networks explode and captivated local media dote on the details for days. Such was the case this weekend, when the saga of a red panda discovered wandering in the city's northeast dominated headlines.

An eight year-old boy surnamed Tao initially stumbled upon the creature while it rummaged through a dumpster. Tao informed his grandfather that there was a strange animal in the apartment complex. After struggling to apprehend the red panda with a fishing net, capturing it once only to see the panda chew through the strings and escape, the grandfather decided to call for help.

Animal control officers arrived at Boyuan Shijia neighborhood (博园世家小区) shortly after the call, but were initially unable to corral the wayward animal by hand. They then attempted to use an air gun and anesthetic dart to sedate it, but by that time the red panda — dubbed 'Prison Break' (越狱) by local newspapers — had climbed a tree and was out of range.

Firefighters equipped with a hook and ladder truck were summoned. After an additional hour of thwarted attempts, they captured Prison Break unceremoniously by the tail. The animal was then placed in a crate and sent to the Yunnan Wild Animals Zoo (云南野生动物园) to await its fate.

At the zoo, handlers released Prison Break from his cage, but found him grumpy and uncooperative. Repeated efforts to return him to his cage failed in the face of the red panda's "fierce resistance" and "lunging attacks". The animal eventually climbed a fence, apparently tired of conflict. Porridge and other delicacies were proffered as lures, but it was not until boiled eggs were placed in a cage that Prison Break finally conceded defeat and returned to captivity. He now must pass tests for disease before being released into a more suitable habitat.

Red pandas — called xiaoxiongmao (小熊猫) in Chinese — are common to both Yunnan and Sichuan. They generally prefer to live in deciduous forests at elevations above 2,200 meters, making Prison Break's foray into Kunming a bit perplexing.

Despite their name, the animals are in no way related to China's national symbol, the giant panda. In fact, they are more closely akin to members of the weasel family. Scientists believe fewer than 10,000 adult red pandas live in the wild today, and China has declared them a 'national protected species'. They have also been included on a list of 420 rare animals the Chinese government is protecting with strict anti-poaching laws.

Kinda makes you wonder if it escaped the clutches of an illegal animal trader whilst on the way to some eating establishment.

Reminds me of this little gem from history. www.thisishartlepool.co.uk/history/thehartlepoolmonkey.asp

October 18, 2021 "Summit Language school is looking for qualified and enthusiastic teachers to join our team starting as soon as possible. The school is location in We …"
Living in Kunming JanJal