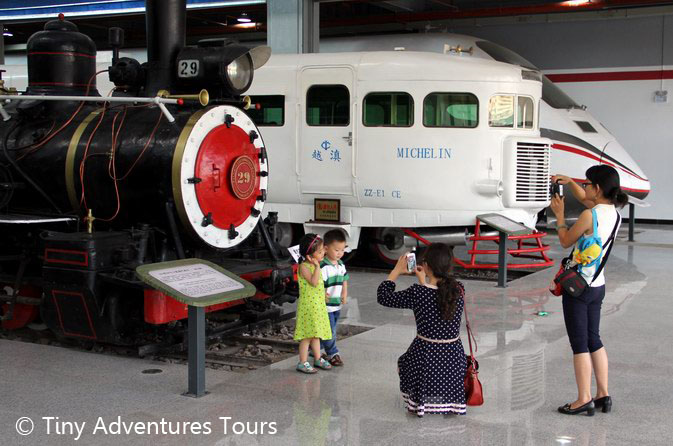 Editor's note: GoKunming first visited the Yunnan Railway Museum (云南铁路博物馆) in 2011, when we found several interesting displays and some great trains. However, there were so few visitors that many rooms weren't even lit. The lonely facility was closed in 2013 and a massive 60 million yuan (US$9.6 million) renovation began, coinciding with the construction of a subway stop on Metro Line 2. The museum reopened on May 18 of this year, and a few days later GoKunming contributor Lieuwe Montsma went for a visit. 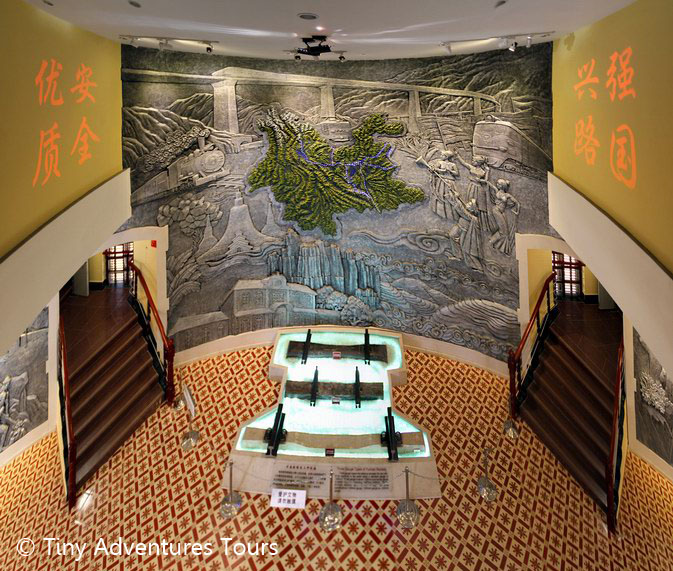 A large mural depicting the different rolling stock used in Yunnan, with actual examples below

Recently, the Yunnan Railway Museum opened again in a brand new building behind the old Kunming North Railway station. The old station forms the entrance of the new museum and holds part of the collection. The old museum concentrated on the narrow gauge railways typical of Yunnan, but the new facility includes present-day standard gauge lines and even focuses on the high-speed lines still under construction that will connect Yunnan with eastern China, as well as the tracks that will form rail links with Vietnam and Myanmar.

The oldest railroad in the province is the Yunnan–Vietnam Railway — in French called the Chemins de Fer de L'Indo-Chine et du Yunnan — which was built by France between 1904 and 1910. It connects Kunming with both Hanoi and the harbor city of Hai Phong in Vietnam. The line is also known as the Kunming–Hai Phong Railway and in China now as the kunhe xian (昆河线), an abbreviation of Kunming-Hekou Line.

Destination shield from the passenger line between Kunming and Hanoi

Passenger trains between Kunming and Hanoi were running on this line until 2003. Concerns about landslides were given as the official reason for the closure of the service, but the low number of passengers might have been the main reason. The line is still in use for bulk goods transport — mainly ore and fertilizer — but is expected to be closed in the coming years.

The construction cost of this railway was enormous in both human lives and money. An estimated 12,000 Asian workers — or 20 percent of the total work-force — died of malaria and other causes together with some 80 Europeans. Still, building a railway through the remote mountains of Yunnan was as complicated as constructing the Panama Canal. Because of this, a large part of the collection of the museum is dedicated to the building of this line. 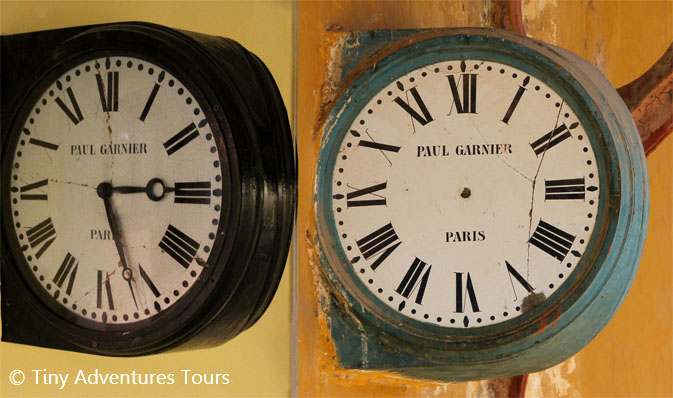 Paul Garnier electrical clocks made in Paris. On the left is a clock displayed in the museum. On the right is the single remaining one at Beshizhai Station, minus its hands

Most of the construction materials for the line were brought from France. The bridge parts came in small pieces that could be carried by men or mules. Even items like the roof tiles used for the stations came from France and samples of these are now on display in the museum.

The French photographer Georges-Auguste Marbotte made an extensive series of pictures during the construction of the line and many of his pictures survive today. The Chinese cartoon artist Li Kunwu created a cartoon story based on these pictures and both his drawings and the original pictures are now on display in the museum. 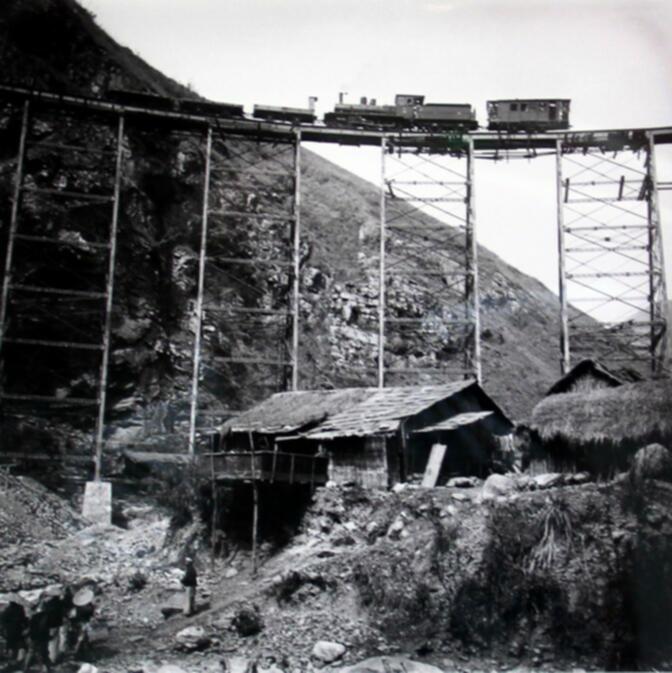 Like most Chinese museums, the collection is for a large part made up of pictures, but the Yunnan Railway Museum has, by its own claim, "more than 10,000 pieces of railway-related cultural objects and literature". The museum sometimes goes a bit too far in its aim to display things nicely, such as having a five-meter wide display for three crowbars, which are arranged as if they are fine art items.

Other displays contain samples of various railway tracks ranging from American to French, German, Russian and Chinese. For most visitors this will be a bit too much, and they will move on to the rolling stock exhibition. Like its predecessor, the museum has texts in Chinese and English. Sometimes the texts are a bit colored and include gems such as "foreign powers plundered China's sovereignty like tigers and wolves" and "...the stupid Qing government". 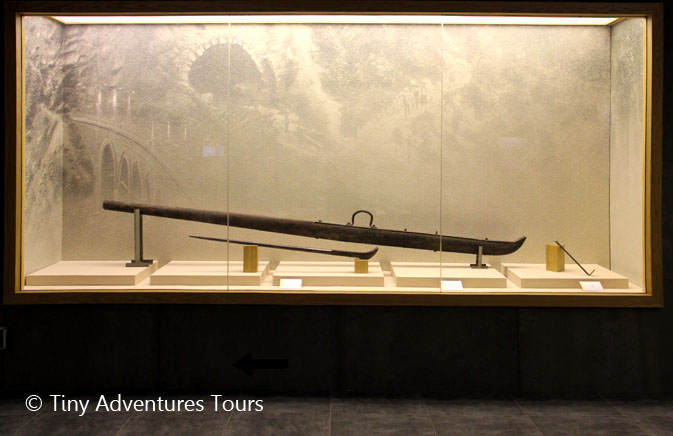 The rolling stock collection, which before was housed in an old railway workshop, now has its own large and airy exposition hall and will for most be the highlight of a visit. Apart from the older collection of narrow gauge locomotives and wagons, the collection now includes standard gauge trains. One of these is possibly China's first high-speed train, the Chuncheng Hao (春城号) which was used during the 1999 Kunming Expo to transport visitors at high speeds to the Stone Forest.

The American-built Baldwin SN-29 super narrow gauge train looks like a toy and is a favorite with visiting kids. Little do they know that this train mainly hauled tin ore that was mined by child slave laborers in the mines around Geju. The French 'Michelin' rail wagon running on rubber wheels was the high-speed train of its day and covered the distance between Hanoi and Kunming in two days. The sample on display is the only surviving train of its kind.

The museum has the theme "From History to Future", and one walks from the exhibition on the first railway in Yunnan — the old narrow gauge line to Vietnam — to the displays related to the new high speed lines still under construction. In the future railway section, one can find displays like these showing the enormous bridges that are planned to be build across the Lancang and Nujiang rivers.

The Yunnan Railway Museum is located at 913 Beijing Lu. It is open every day except Mondays and Tuesdays from 9am to 5pm. Entrance tickets cost ten yuan and discounted prices are available for kids and the elderly. Visitors should note that the metro stop, Kunming North Train Station, is still under construction. 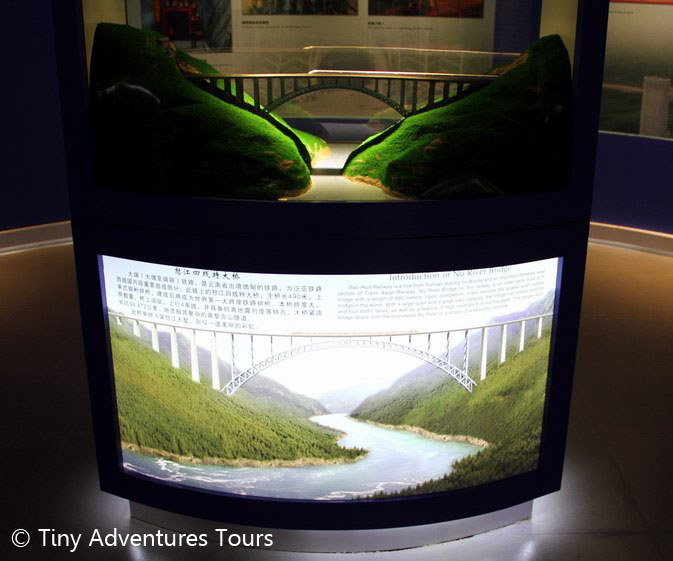 Amazing construction project. The railroad never made a profit, but it had a great deal to do with the modern history of Yunnan. The old museum was already good. Marbotte's book, Un chemin de fer au Yunnan: L'aventure d'une famille francaise en Chine, is an interesting read - many of the construction bosses were Italian, and many of the maintenance workers were Vietnamese - within these groups, in later years, Ho Chi Minh and other future Vietnamese leaders were able to move. Southern sections of the RR were intentionally destroyed by the Chinese after the Japanese took French Indochina, to prevent possible invasion of Yunnan.

Edit button unavailable - anyway, the southern sections were actually destroyed earlier, after the Germans took France and Indochina came under Vichy French rule, under the eyes of the Japanese, who took over Viet Nam directly only in 1945.

It was a little-visited gem before. Looks even better now. I'll be revisiting.

I recall seeing some 5" gauge models of the steam engines in the old museum. These are real miniature working models, designed to run on ground level steel tracks, that had been constructed by model engineers, don't know from where.
Anyone know if they are they still on display?

This was a great museum before and now appears to be world-class.

It is one of the most interesting things in Kunming and well worth several trips there.

When we visited the old version, the woman in charge was the daughter of a lifelong railroad man, and she grew up with railroads in her blood.

Went yesterday with my toddler son. It really is an excellent museum now, with lots to see and plenty of English on the explanatory signs. It's a bit disappointing that you can no longer go inside any of the trains (you used to be able to) but it's my only complaint .. oh, apart from trying to charge 10RMB for a can of soda! Great museum for anyone with even a passing interest in Yunnan's railways.

For those who love steam, this is an interesting feature documentary from the Guardian newspaper:

The museum has expanded and now also has a nice section on China's High Speed Train System, including a mock-up of the inside of a HS train.