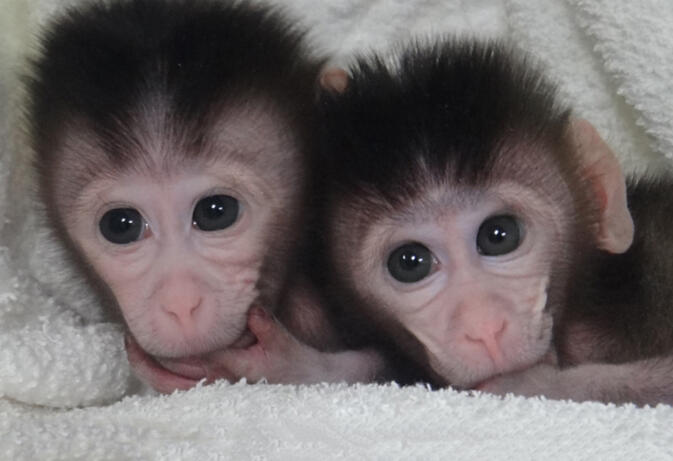 Last winter, scientists working in Kunming cloned twin monkeys after having altered specific portions of the DNA in fertilized eggs. The feat was recently ranked one of the top ten most important 'Breakthrough Technologies of 2014' by the Massachusetts Institute of Technology. The research represents the first time scientists successfully performed 'targeted gene editing' in primates, an accomplishment which could have far-reaching ramifications for the way inherited diseases are studied and prevented in the future.

The two female macaque siblings were born at the Yunnan Key Laboratory for Primate Biomedical Research in November 2013. Named Lingling and Mingming, the monkeys were two of nearly 200 embryos genetically modified by researchers. They were chosen as the healthiest candidates and then implanted in a surrogate mother, who brought them to term five and a half months later.

Scientists from the Key Laboratory are working on the genetic experiment in conjunction with a team from Nanjing University. They will now monitor the monkeys as they grow to adulthood "to detect any consequences of the pioneering genetic modifications", according to a Massachusetts Institute of Technology report.

Alterations to the monkeys' DNA was made using what has been called the CRISPR method — a recently developed procedure that allows scientists to "edit or correct" specific genes in embryos. The monkeys being raised at the Kunming facility have three genes that have been manipulated in this fashion. If they can grow to adulthood without experiencing unforeseen physiological or behavioral abnormalities resulting from their 'genetic editing', the monkeys will represent what could be a new frontier in genetic engineering.

Researchers hope that if healthy primates can be reared with multiple genetic edits, others like them could then be used to study a host of inherited diseases such as cystic fibrosis, sickle-cell anemia, Huntington's disease and Alzheimer's disease. Knowing whether the experiment undertaken in Kunming is a success will require some patience however. Lingling and Mingming will take another three years to reach maturity, and while they grow scientists will monitor them closely to see if their cells continue to replicate the 'edited' DNA.

In addition to possibly having great consequences for science, the situation of the two Yunnan monkeys raises thorny ethical questions. Chief among these for some are the moral implications of testing on primates so closely related to humans. Another, perhaps more distant concern, is that of for-profit genetic manipulation using CRISPR. If it is proven that the technique is safe in the treatment of disease in humans, it could also be used to eliminate or alter undesired 'cosmetic' genes in children before they are born.

Planet of the Apes

As usual, still, our human society does not care giving the necessary account of the issue. This is obviously an achievement that took years of research. How many monkeys were used and died for this. How costly was this project? What is the estimate for future human life savings vs. animal sacrifices?
Even if this is China, any state funded research should be bound at stating such data in their results.

And in other recent Kunming primate research, monkeys were flooded with stupendous levels of MDMA to reproduce Alzheimer-like symptoms in order to test potential treatments. What a waste of MDMA.