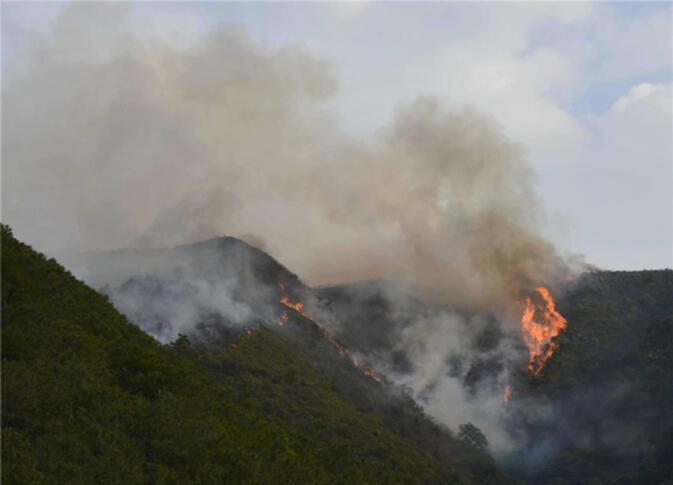 Those out and about in Kunming's Xishan, Panlong and Guandu districts on the evening of April 16 may have noticed something wasn't quite right. The air had an acrid taste and sunlight was first tinted an eerie orange and then blotted out by a plume of gray smoke. The odd atmospheric effects were the result of a wildfire that broke out Wednesday roughly 15 kilometers northwest of the city center.

The fire was first reported at 3pm by residents of Xishan District (西山区) living on Qitai Mountain (棋台山) in the village of Lizhe (利者村). One hundred and thirty firefighters were dispatched to the scene along with four support vehicles. Upon their arrival, they reportedly found locals had already banded together to battle the blaze. 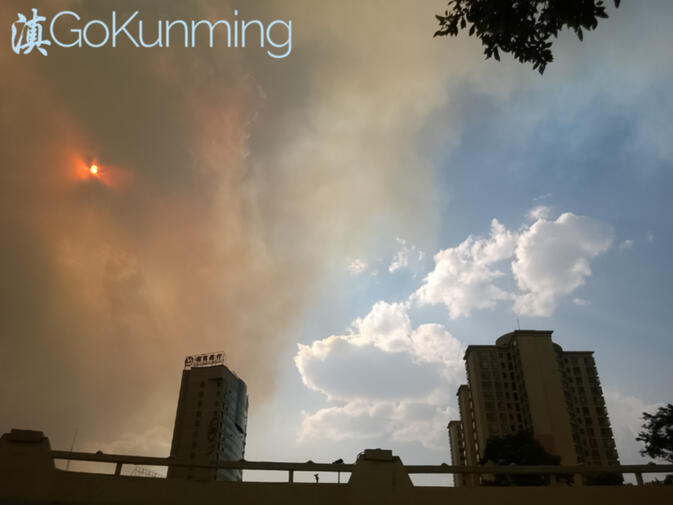 People living near where the fire broke out were evacuated by emergency crews. The areas where the fire is burning is sparsely populated and no casualties have been reported. Four buildings — one barn and three houses — have so far been destroyed by the flames. Overnight, firefighting crews were steadily reinforced by army units and volunteer firemen from nearby towns. More than 1,500 people are now battling the blaze and have formed a six-kilometer "firewall" in an effort to control the flames from spreading further.

Firefighting efforts have been hampered by poor infrastructure, steep mountain terrain, high temperatures and blustery and erratic wind conditions, according to a spokesman from the Kunming Fire Prevention Bureau. Even before the Qitai Mountain fire began, most pine forests around Kunming were under high risk of fires due to the current dry season. Conditions have been exacerbated by the relative humidity in Kunming dropping below 20 percent for more than a week — making it as dry during that span as the Sahara Desert. 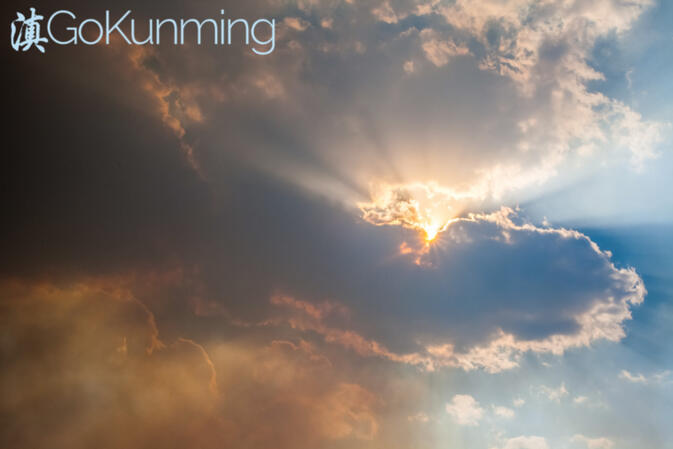 Prevailing winds are pushing the fire west toward Anning (安宁), but officials caution its spread could change direction unexpectedly. Several important cultural sites and historic buildings are located nearby where fire is burning. One of these, centuries-old Bamboo Temple, has had brushes with fate before, most recently avoiding serious damage during a May 2010 forest fire.

As of this writing, no reports of containment or the exact size of the Qitai Mountain fire have been made. This morning after the blaze ignited, the western area of the city remains shrouded in thick, yellowish-brown smoke. Weather forecasts are calling for warm, windy and dry conditions to continue at least through the weekend, which could further hinder efforts to extinguish the flames. 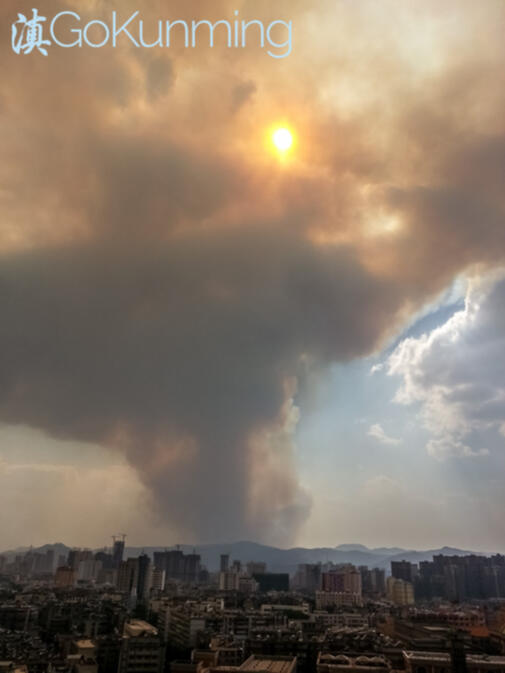 Editor's note: This article will be updated as more information becomes available.

Great pictures, especially the last one.

I recently learnt that as a means for controlling erosion in the hills around Kunming there was a program to establish fast growing Eucalyptus. As an Australian I have noticed that the long dry season here has a serious effect on the drying out of these trees much more so than in their native range. With a high oil content, these exotic forests are a serious tinderbox. We have seen the effects that these trees have not only in their Australian habitats but also on a large scale in California. I hope they consider replacing them with native forests in the future.

Is there now a fire burning to the north as well?

Are you referring to the eucalyptus with brown / dead leaves?

The cold ice snap we had this winter is what killed off these trees, they usually do quite well in the driest parts of yunnan.

I agree on the fire hazard from eucalyptus, must i say dead or alive.. although i cant see them planting another species because the main reason they plant them is for paper production. In southern Yunnan they clearcut the old growth forest to plant eucalyptus.
Mike

I believe eucalyptus also kills whatever is attempting to grow underneath it, making our Yunnan plateau even more arid and likely to catch fire.

As of a news report from early on the morning of April 18, the fire continues unabated. Now 4,400 firemen, 35 water trucks and a helicopter are fighting it. Prevailing winds must be blowing it away from Kunming.

One of the biggest problems in controlling fire will be the strong winds we are having recently.

Today in Dianchi, I can not only see a brown tinge to the colour of the sky, I can smell the burning.

The fire was officially extinguished on Saturday, April 18. No casualties were reported and the fire burned 520 acres of forest. The cause is still under investigation.