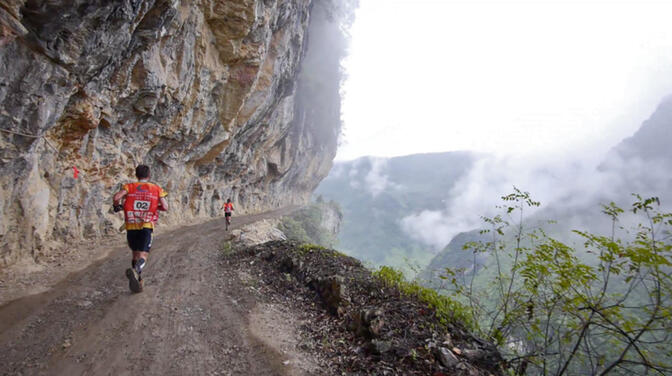 Editor's note: Pavel Toropov is from Wimbledon, London. He is an elite semi-professional long-distance runner, specializing in trail races ranging between 50 and 100 kilometers.

Toropov is currently based in Shangri-la, training full-time at altitude for the upcoming trail and adventure race season in Asia Toropov will be keeping us abreast of the adventure sports scene in Yunnan and China throughout 2014.

The Wulong Mountain Quest is one of the largest, and the richest, adventure races in the world, a four-day all-out dash across the lush and often waterlogged Sichuan mountains. Teams of four run, cycle and kayak their way toward a first prize of 100,000 US dollars.

It is by far the richest race of this kind in the world. The local government puts up an exorbitant amount of prize money, and in true Chinese style, spares neither the pomp nor the expense for the opening and closing ceremonies. The world's top adventure racers come for this competition, true multi-sport supermen and women. Excellent outdoorsmen all, many are ex-pro mountain bikers and kayakers, some are former Olympians, sponsored by brands like Patagonia and Red Bull. 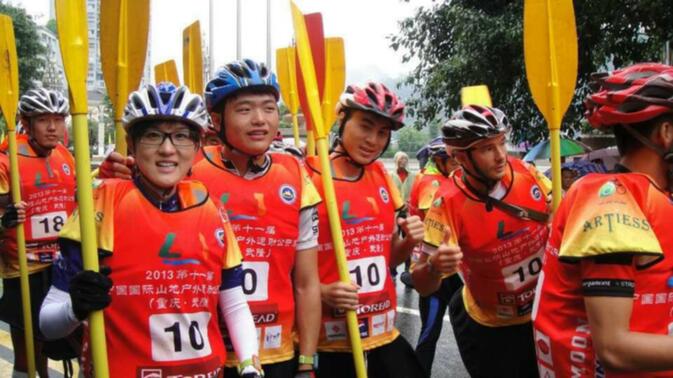 Bizarrely, in China these elite athletes share the field with a rather different type of competitor, slap-dash Chinese teams, which are invited to make up the numbers. I walked into an unexpected adventure by agreeing to come as a last-minute replacement for one of those teams.

My team — the teams consisted of three males and one female — was made up of students and a recent graduate of Chinese sports universities. One was a speed climber, one a skier and the woman an ex-gymnast. All of them were summoned to race through a network of sports guanxi. It was obvious that none of them had trained in any way for the event, but all were delighted to get a free trip to Sichuan. 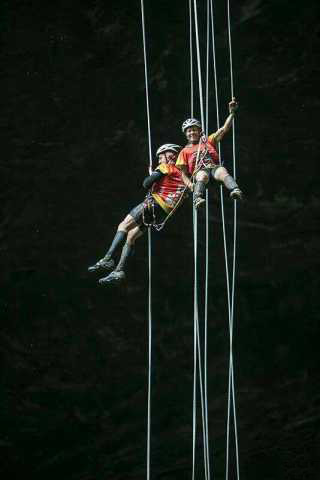 I was, by default, the Master and Commander of this bunch, whom I called the Number Three State Turtle Farm Outdoor Club, or the Turtles for short. None of the Turtles had bikes, harnesses, carabineers or any other gear required for the event. We were lent ex-hire bikes by the organizers and I had to distribute whatever other gear I had amongst the team.

The race started with a two-kilometer run and I grimly hooked the Girl Turtle into a pulling line attached to my waist — the weakest team members are towed by the strongest — despite her protestations. After 500 meters the Girl Turtle was screaming for me to slow down and the other two Turtles were way behind, breathing hard, unable to keep up. I then realized that finishing would be a miracle. On the first day we were sixteenth out of 20 teams and, as a group, the Turtles were delighted not to be last.

On day two we had a ten-kilometer kayak section through what turned out to be rather scary whitewater. The cheerful, somewhat chubby Skier Turtle from Harbin informed me that he could neither swim, nor kayak. He did seem to have an unshakable belief in the powers of his life vest and did not seem unduly worried. I was.

The river was very quickly filled with capsized kayaks of the make-up the numbers teams. Some unfortunate competitors were clinging, limpet-like, onto tree branches and rocks on the banks and the rescue boats more than had their hands full. I steered my turtles through the rapids and they were absolutely stoked not to have capsized and to have avoided the indignity of being fished out. I felt a little inspired too and very proud of my Turtles. Competent they were not, but they were cheerful, brave and tough. 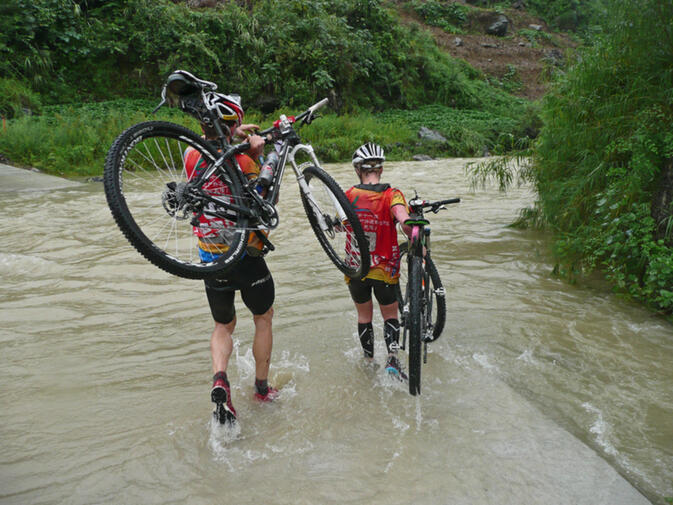 My excitement soon wore off on the mountain bike section, were it turned out that the Girl Turtle had no up-hill capability. I had to run behind her, pushing her bike with one hand, holding my bike with the other, while she tried to pedal in the lowest gear. The problem was that the Harbin Skiing Turtle was unable to keep up and I had to propel the Girl Turtle uphill, launch her down from the top, leave my bike, sprint down, push the Skiing Turtle up, launch him, then jump on my bike and repeat the procedure on the next hill.

This method was effective, if highly energy consuming, and we even managed to overtake two other non-related Turtle teams. We missed the cut-off time for the day and had to take a huge time penalty but were still in sixteenth place, far from being last. The Turtles were delighted but I was absolutely spent, the mountain bike section was 60 kilometers. The next day was even tougher and I knew that what we were doing was not sustainable.

I summoned all my powers of diplomacy, hinting to the Girl Turtle that we should pull out. The reply was that our chengji — or achievement — was so far really good and pulling out would be silly. She did not seem to realize that our chengji was solely due to me pushing and pulling two people and three bikes for hours on end through wet Sichuan shrubbery. 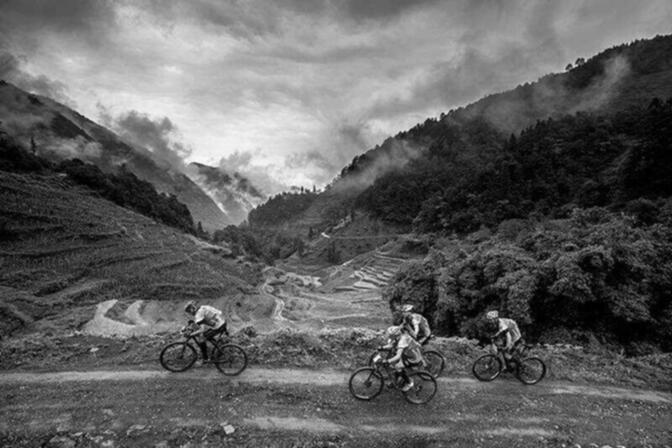 The German race director had said in the race briefing that "Ze downhill mountain bike section eez very technical!". And that's where our Great Turtle Adventure came to its end. By the time we were on the mountain bike section the Girl Turtle was exhausted, mumbling incoherently that she could not feel her arms. I ordered the Turtles into a defensive formation around the quickly fading Girl Turtle for the remainder of the ride. Nevertheless, a few minutes later, on a steep downhill, she hit a rock, was launched from her seat and landed face first in the mud with a thud.

She was lying unconscious in the muck, convulsing, face covered in blood, and was on the point of biting off her tongue. I managed to pry her jaws open, and free her tongue which I then had to prevent her from swallowing. The other two Turtles stood around in shock.

A bunch of peasants materialized out of nowhere, extremely excited to see a foreigner digging around in the mouth of a bloodstained Chinese girl. I demanded a mobile from one of the peasants and ordered the Skiing Turtle to call the race organizers and get an ambulance in, while the Climbing Turtle was dispatched to cycle to the next checkpoint. 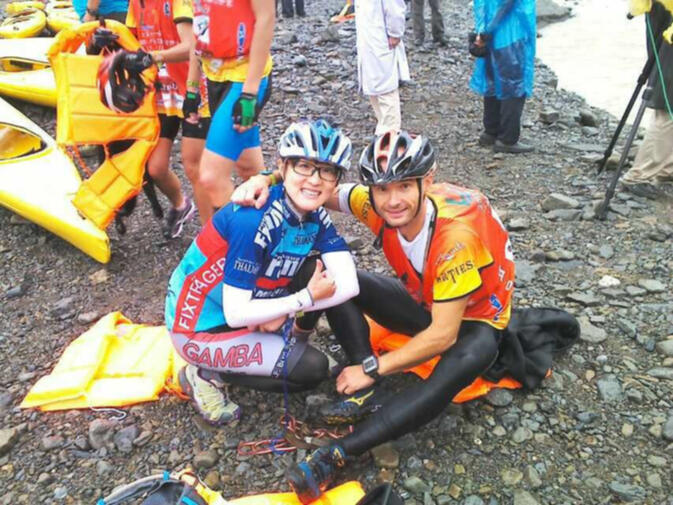 The author and 'The Girl Turtle' before her unfortunate accident

The phone plan failed, as there was a great deal of confusion as to where exactly we were and whom we could call. A peasant was dispatched to the nearest house to bring clothes to wrap up the girl, who, to my infinite relief, soon regained consciousness and asked what happened.

Twenty minutes later an ambulance made its way down the muddy track and our wounded Turtle was taken to the nearest hospital. She had several stitches to her lips and mouth, but did not lose any teeth. When she came back to the athletes' hotel the following day, face grotesquely swollen, she was more concerned about the fate of her baseball hat that she thought she lost.

I still keep in touch with my former teammates on Weixin, and a skiing reunion of the Number Three Turtle Farm Outdoor Club is due to take place in Heilongjiang this February. 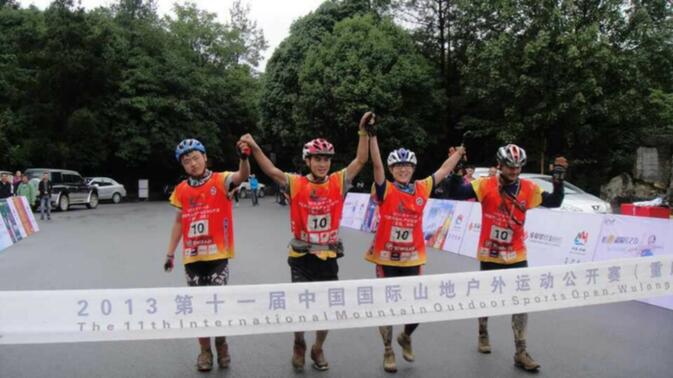 My god. How ridiculously dangerous and irresponsible. The race organisers should be ashamed.

Having done multisport events myself, if the organisers encourage participants to kayak in whitewater when they can neither swim or know how to control a kayak is tantamount to criminal negligence. When someone dies (not if, if this continues) which is incredibly likely if it has not already happened, hopefully the race is shut down or the organisers completely changed to people who actually know what they are doing.

You poor bastard Patrick, I guess this is a lesson learned?

A cracking read, all the same!

A brave effort indeed and an enjoyable read!