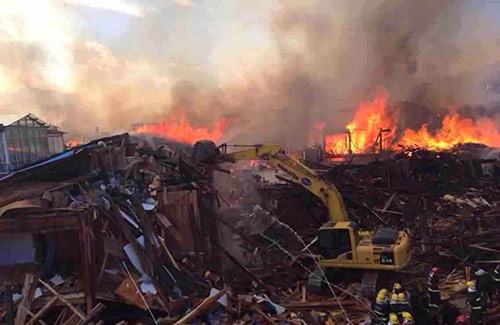 A fire that broke out early on the morning of January 11 in Yunnan's Shangri-la (香格里拉) has destroyed hundreds of homes and businesses. Local authorities have, as yet, reported no casualties and the cause of the blaze remains unknown.

The fire was first reported around 1:30am Saturday morning and conflicting reports claim it started in either a hotel or warehouse in the city's old town, known as Dukezong (独克宗). The flames spread quickly through the neighborhood, which was composed almost entirely of wooden buildings.

Efforts to extinguish the blaze were reportedly hampered by high winds and arid conditions brought on by the province's dry season. Narrow lanes and alleyways also prevented firetrucks from reaching some burning buildings. 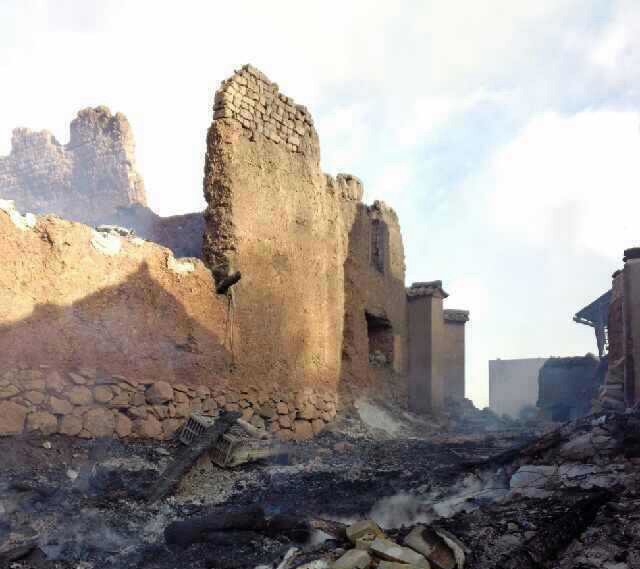 The blaze was completely extinguished after 14 hours, and official accounts reported 242 buildings were destroyed and hundreds of others harmed by smoke and heat. Arson has been ruled out by local police and by Sunday, during the firefighting, heavy construction equipment was being used to demolish damaged buildings and clear away rubble.

Also lost in the fire were an undisclosed number of thangka — Tibetan Buddhist textiles of painted or embroidered silk often depicting Buddha or important bodhisattvas.

For the past decade, the largely Tibetan Shangri-la has experienced an influx of tourists as provincial planners first renamed the city — formerly known as Zhongdian (中甸) — and then refurbished the old town. The new moniker is a reference to James Hilton's novel Lost Horizon, which tells the story of an exotic monastery hidden in the Himalaya mountains.

This is the second instance of a fire breaking out in a popular Yunnan tourist destination in the past ten months. The old town of Lijiang experienced a fire, albeit a much smaller one, in March 2013, and a series of unrelated fires have hit Tibetan areas in Sichuan over the past several months. 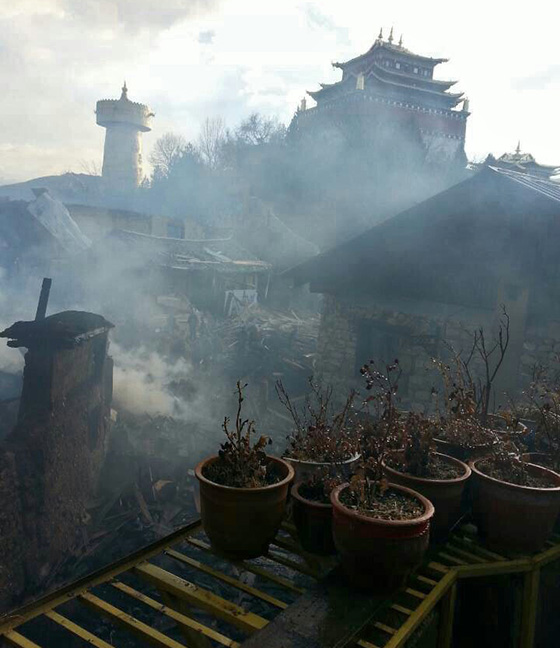 My wife and were saddened to read this report and see the photos. Despite it's "commercial" bent, old town in Zhongdian was one of out favorite places in Yunnan. We will fondly remember the cheerful smiling faces of the inhabitants, the winding narrow streets and the general charm of old town.

Rebuilding will not bring back the old charm, but we hope that those who live and work there will be able to recover soon.

Patrick, thanks for the in-depth coverage.

im a native. feel heartbroken when i saw the ruins.

All these fires makes me think that it is set on purpose so the land developers can build new building and make a huge profit.