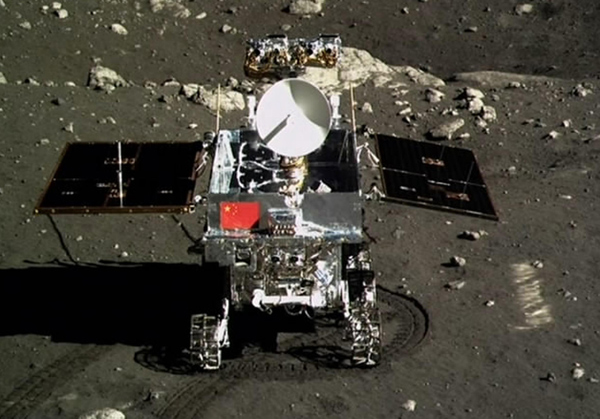 On the evening of December 14, 9:12pm Beijing time, China became only the third country ever to land a spacecraft on the moon. The following day, an unmanned rover was deployed to explore the lunar surface. The accomplishment is another step in a planned two-decade project that aims to place a Chinese astronaut on the moon before 2030.

A largely unknown facility in the eastern hills of Kunming is playing a crucial role, first in guiding the Chang'e 3 (嫦娥三号) spacecraft to a soft moon landing, and now in monitoring the movements of the Yutu (玉兔), or Jade Rabbit, lunar rover. The Yunnan Astronomical Observatory (YAO) is home to one of four linked radio telescope facilities sending and receiving information to both the lander and rover.

When the Yutu rover disembarked from the Chang'e 3 landing module late Sunday night it first engaged its solar panels and then raised a directional radio antenna. Signals from the transmitter were beamed back to earth and captured by China's Very Long Baseline Interferometry (VLBI) array, which consists of the 40-meter radio telescope at YAO as well as others in Beijing, Shanghai and Urumqi.

By linking the four radio telescopes, the China National Space Administration (国家航天局) can precisely ascertain coordinates of satellites, and now modules on the moon. Pinpoint accuracy from hundreds of thousands of kilometers is a necessity for a lunar landing, as it is in providing assistance for controlling the movements of the Yutu rover.

If all goes according to plan, the rover is expected to explore the moon's Bay of Rainbows. In addition to its antenna array, Yutu is equipped with a three-dimensional camera, ground penetrating radar, a robotic arm and spectrometer.

China first initiated its series of lunar exploration satellites in 2007 with the successful launch of Chang'e 1, which was designed to survey the surface of the moon three-dimensionally. That was followed three years later when Chang'e 2 — a more sophisticated lunar satellite — began orbiting the moon largely to gather information for the landing conducted this past weekend.

The satellites bear the name of the Daoist goddess of the moon. Chang'e was said to have been joined on the moon by her companion the Jade Rabbit, who created an elixir of immortality. His name was given to the lunar rover. Chang'e 3 and Yutu are expected to function for approximately three months, with the rover conducting ground-based experiments while the lander utilizes an ultra-violet telescope to examine the earth's atmosphere.

I hope they don't cover up what's really there like the moon bases and UFO, etc.

I wonder how long it will be until national regimes and/or private corporations start claiming they 'own' areas of the lunar surface. Read Sitting Bull's contemptuous comments on the White-American idea of land ownership in BURY MY HEART AT WOUNDED KNEE ("They say we sold the land but we never did. Sell the land? Why not sell the sky, and the moon and the stars?")

I wouldnt exactly call all non-Euro/American principles of land ownership fair and equitable either. Many cultures have cut up the land they lived on and turned oases into deserts—definitely not a new "western" phenomenon. That said, in general the issue of the moon has been settled in principle by international conventions, but enforcement wasn't really included because no one has yet figured out how to extract resources from space and get them back to earth at a reasonable cost. Out of sheer curiosity though, what would be terrible about a country/company owning an asteroid and mining it? Don't get me wrong, seeing the coca-cola logo on the moon wouldn't be fun, but we are not nearly into that realm yet.

can public go to the observatory for educational purposes? would be completely interested!

@atwilden, you're right, the whole concept of ownership in any form has always been an important social issue everywhere, with a tremendous variety of local solutions that have worked for a time, more or less, until they no longer worked - still, I like Sitting Bull's incredulousness at the idea of land ownership: the man was not stupid, and it raises basic questions. Then there's control of the seas, which has been in the news lately....as for asteroids, I dunno, but take a look at the machinations of 'the company' in the ALIEN films.

yes, the observatory is part of the Chinese Academy of Sciences and is open for educational visits to the public. They have a great observation tower with a sun telescope you can view (which is 7 flights of stairs up an old Maoist era tower—very cool), as well as an older but still cool IMAX dome-style theater where you watch some films about movement of the stars in Yunnan (all in Chinese). There aren't any foreign staff, so the tour would be entirely in thick Kungminghau. There is also a great hole in the wall museum with old astronomical instruments, some meteor fragments and a few exhibits on Chinese astronomy.

When I was there 2 months ago, the old road the connects the observatory to the city had been torn out and we had to drive on muddy clay. It's also pretty far out (near the airportish), and the facility is OLD. Most of the scientists/their families/support staff are really friendly, and most had never seen a foreign visitor before.

If you have enough people who are interested, we could get a minibus and arrange a tour via their sister Zoological institute on Jiaochang Donglu.