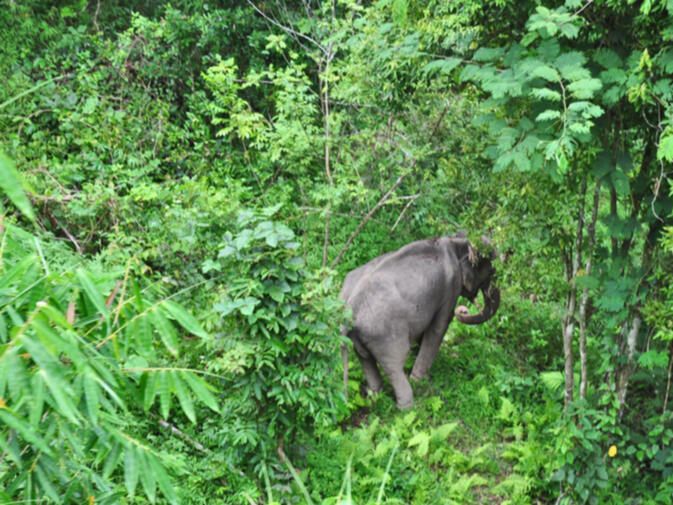 Southern Yunnan is home to China's only remaining wild elephants. Increasingly, the animals are coming into contact with humans, often with severe consequences for rural residents. In an effort to lessen the number of interactions between pachyderms and people, the Simao District Forestry Department has announced plans to begin feeding wild elephants to keep them away from farmland.

The project, dubbed the "elephant canteen" (大象食堂) by local officials, will encompass 3,900 mu (亩), or roughly two and a half square kilometers. Much of the area will remain forested, but more than fifty hectares will be planted with wild bananas, bamboo and other edible plants.

Forestry department officials hope the availability of such fast-growing forage will offer elephants an alternative to raiding nearby cropland. The forage area, which is expected to be fully planted by early 2014, has an estimated price tag of 2.6 million yuan (US$427,000).

Whether or not this endeavor will ultimately prove successful remains to be seen. However, if the "canteen" does eventually lure elephants away from farms it could be a cost saving measure. Last year the Pu'er government paid farmers 4.2 million yuan (US$690,000) in restitution for damage to crops and buildings caused by the animals.

Li Yichuan (李益川), who is in charge of the project, has said the goal of the effort is to "protect the wild elephants, minimize the the impact [of elephants] on local people's lives and alleviate human-elephant conflict."

Monetary losses are not the only concern. Li told journalists there were 231 reports in Yunnan of elephant "accidents" in 2012, including one fatality in Xishuangbanna. This year a woman in Jingne Township (景讷乡), roughly 70 kilometers north of Jinghong (景洪), was trampled to death by an enraged elephant.

Pu'er spans 45,385 square kilometers.
Where exactly in Pu'er is this elephant feeding ground to be located?
Let's have some geographic specificity! At least, a county name would be nice!

Yay! Another one up for animals! Is China finally starting to care? Please keep us updated about this project.

@Geogramatt: the source article is no more specific than Simao District, which is mentioned in the above article's second sentence. It is one of ten administrative districts in Pu'er and located in the south-central portion of the prefecture.

I'd be careful of how much information you provide to this Matt character. Lots of hunters from Georgia and I wouldn't be surprised if he was planning on using this as an opportunity to get in the ivory trade. Shame on you Georgia Matt!