Two years on the road: Cycling from Paris to Shanghai

By Patrick Scally in Features on November 20, 2013 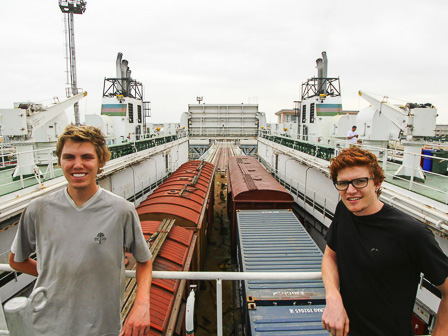 For the past twenty-two months, friends Chris Walker and Morgan Hartley have been on their bikes. They have cycled thousands of kilometers together through 23 countries and now their journey is almost complete.

Along the way the way they have been documenting their progress and experiences at website postulateone. In addition to dozens of blog posts, the two have co-authored articles for American media outlets including Forbes, National Public Radio and The Atlantic.

While on the road, they have written about government surveillance in the Republic of Georgia, Cambodia's orphan industry and child kick boxers in Thailand. They also have plans to write a book together once all is said and done.

GoKunming sat down with Walker and Hartley while they rested for a few days in the Spring City. We spoke at length about their goals, experiences and how a trip of this nature can tax a friendship. Since our conversation, the two have departed Kunming and are quickly making their way to Hong Kong. We wish them all the best. 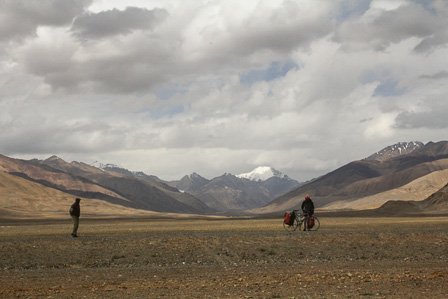 GoKunming: When did you come up with the idea for a two-year cycling trip?

Chris Walker: It was something we first discussed in November 2011. It took about six months of fundraising and logistical planning before we could leave. Morgan was living in Paris so we decided to start from there.

Morgan Hartley: And it's been an evolving process. Originally we just drew a straight line across the map from Paris to Shanghai and expected that to be the general route. We've altered the plan, taken flights back and forth between Central Asia and India, its been fairly organic.

GK: So what is the overall goal of your journey?

Hartley: Ultimately we both want to become journalists. This entire endeavor is helping us build up a collection of work in places other people may not have the funds or opportunities to visit.

Walker: It is an opportunity to learn what works and what doesn't with regards to storytelling. But we'd be lying if we discounted the travel aspect. We're both endurance junkies and this is a unique way to experience the world. Cycling, for us, is the perfect way to see different countries. It isn't just flying in, hitting some spots and moving on. You get to know the land and people a bit better than you otherwise would using faster modes of transportation.

Hartley: Right. This is a way to incorporate our career goals into a long trip and a way to make our time spent on the road more valuable. 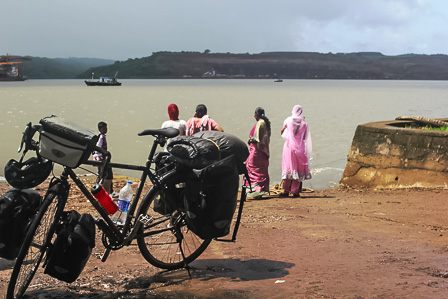 GK: What sorts of journalism are the two of you contemplating getting into?

Walker: We have different interests. I'm more interested in long-form journalism — in-depth articles. Ideally it would be for news magazines that could devote space to things like character features and storytelling.

Hartley: For me the interest lies more in public relations, but I'm also interested in luxury magazines. I would like to find out how news networks function and focus on hard, short news pieces.

GK: You are passing through so many countries, cultures and traditions, are there any themes you are focusing on?

Walker: Attempting to figure out cultural nuances has been pretty important to us. We've tried to set up home stays when we can. Observing family life is a good way to begin to understand public life on the streets versus private life inside the home.

Hartley: Another recurring thing is us realizing how little we know. In some places, such as India, we spent enough time that we began to feel comfortable with the country and felt like there was some genuine understanding of what was happening around us. But it has been hard. Sometimes it feels like we only get an inch out of every mile.

Walker: There is just so much you can learn from other people. Just because we finished school doesn't mean we are no longer students. 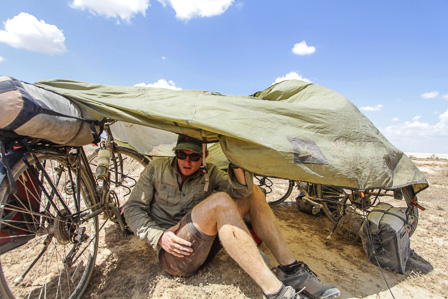 GK: You've been together day and night for 22 months. Has it been difficult to sustain a healthy level of civility for the entire time?

Hartley: We are both hyper-competitive. Our first year on the road we would race each other up hills and to destinations for no reason. But we've learned to temper it and it has faded since we started.

Walker: There was also a bit of a rivalry when it came to our writing. In New Delhi it actually became insidious. We were working together on a story and had to conduct separate interviews. Each of us thought our own interview was more important than the other. It was completely unhealthy, a low point in our relationship, but we've mostly gotten past it.

Hartley: We wrote an article on our blog earlier this year entitled The Ultimate Bromance. We somewhat jokingly draw parallels between our relationship and a marriage [laughs]. There are a lot of similarities. The greatest takeaway for us has been learning how to make a relationship of this intensity work. You have to make allowances for each other.

GK: Has the experience been made more difficult by culture shock and language difficulties?

Hartley: Maybe at first. The culture shock has dimmed. Now we're used to craziness and unpredictability.

Walker: We usually pick up a few simple phrases shortly after we get into a new country and muddle our way through with gestures. We have become masters of gesticulation. One thing we've learned is that pharmacists are an amazing source of information. Most of them have learned English so a pharmacy is a great place to go when you've hit a wall. Kind of surprisingly, China may be the hardest place to make people understand what we are trying to get across. 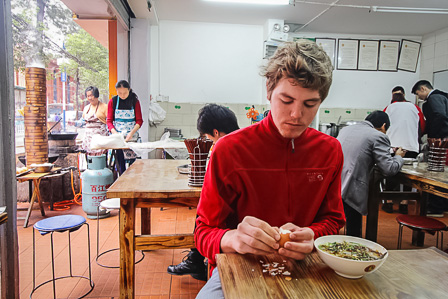 A breakfast of boiled eggs and mixian for Chris in Kunming

GK: Speaking of China, what memorable experiences have you had here?

Hartley: We explored Uighur Hip-Hop in Xinjiang for an article, which was cool. And one night, when we were cycling near Kashgar, we were getting ready to spend the night outside, basically in a ditch. A yak herder came up to us and basically said...

Walker: ...Well, we honestly don't know what he was saying.

Hartley: True [laughing]. But what we think he was trying to tell us was the weather was going to get really cold and we shouldn't think about sleeping outside. He invited us into his yurt and we stayed there for the night, eating dinner with his family.

Walker: In Yunnan we've basically stuck to country roads. We bypassed Lijiang and Dali in favor of seeing the countryside and avoiding tourists. The cycling has been brutal. In one day we had 3,000 meters of elevation change.

We have a few weeks to rest here in Kunming and see if we can write a story. So far we've enjoyed our time here. Kunming seems very relaxed and chilled out.

GK: From Kunming you have a sprint to Hong Kong to meet up with your families and then the last push to Shanghai. What is in store once you get there?

Hartley: We've heard rumors of this shadowy underground figure in Shanghai named Stanley — who is supposedly the father of Hip-Hop in China. Apparently people make pilgrimages from all over the country to smoke with him, like some sort of Chinese Bob Marley. We don't know if the stories are true, but we are going to try and find out. 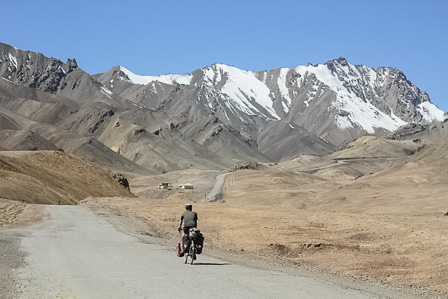 On the road in the Republic of Georgia

GK: Once you finish this endeavor, what are you going to do with your initial time in the United States?

Walker: We'll want to assess the evolution of our stories. Try and value them, not just from a personal standpoint or according to which ones were published, but to see what was truly important in what we witnessed.

Hartley: And we need to reconnect with everyone back home. We both want to get back a feeling of community and familiarity. Two years on the road is a long time and it gets really lonely, in all senses of the word.

GK: Not to sound too corny, but what have you learned through all of this?

Walker: I think we are both a lot less self-centered. We went into it with all of these professional goals and embarked on this huge resume-building process, but we've been humbled by the generosity we experienced. The world of people is vast and so many of them took us in with no thoughts of reciprocation or reward. Realizing that has made us both strive to be a bit more selfless in our actions.

Hartley: Its been a great lesson in persistence. I wanted to quit twice and decided against it. Tracking down stories is hard work and we managed to find a good balance between exhausting our minds while writing and then our bodies on the bike. 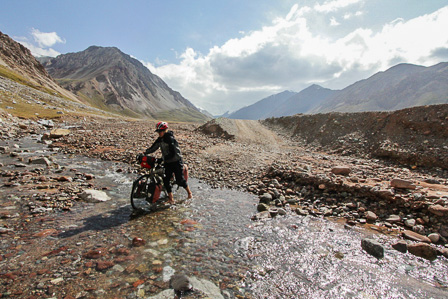