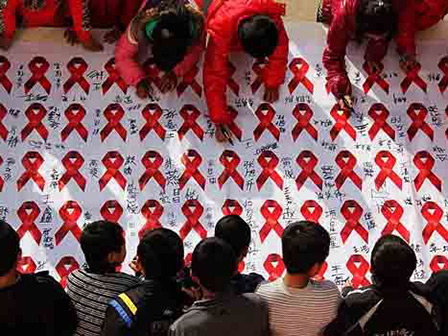 Yunnan has long been the province in China most affected by HIV/AIDS. Generic anti-retroviral drugs are reportedly made available for nearly all who seek treatment but that is often where government support ends. Now health experts and some prominent Beijing officials are pushing for professional and peer counseling to be made available to those suffering from the disease, especially adolescents.

More than 8,000 children in China are currently growing up with HIV/AIDS, according to government statistics. Many of them are not informed of their condition until they reach puberty, if at all. The issue is particularly thorny in situations where mothers have passed the disease on to their children.

In many cases, anti-retroviral medicine is given under the guise of something else as parents can be too ashamed to explain things truthfully. Other concerns include children being socially ostracised or bullied once their infections are made public.

A new program in Kunming is looking to alleviate some of the social stigma attached to children living openly with HIV/AIDS. The camp, begun in mid-August, focuses on mental health counseling and specifically addresses how kids can deal with issues of shame, depression, denial and exclusion.

In the past, camps such as these have been centered around group activities aimed at making children suffering from HIV/AIDS feel welcome and accepted. While that is one necessary step, event coordinator Shen Jie (沈洁) of the National Center for AIDS/STD Control and Prevention has said counseling is now being embraced as a crucial component of treatment. Shen told the China Daily:

Unlike the commonly seen sightseeing type, [this] camp aims to inform the children in a proper way of the disease they suffer from [and] help them correctly identify their status and better handle negative feelings.

In addition to children between the ages of 10 and 15 from Yunnan, the program was also attended by youths from neighboring Guangxi province. The camp was modeled after a similar program underway in Beijing, which was designed to help counselors provide guidance not only to children with HIV/AIDS, but also to their parents and health care providers. It was attended by China's First Lady Peng Liyuan (彭丽媛), who is an ambassador for the National Health and Family Planning Commission.

Although Yunnan is home to less than four percent of the nation's total population, it claimed more than 15 percent of all newly reported cases of HIV in 2012. Non-governmental organizations and community outreach coordinators in the province have been advocating for these types of counseling programs for some time. It seems China may now be willing to heed this advice on a national level.