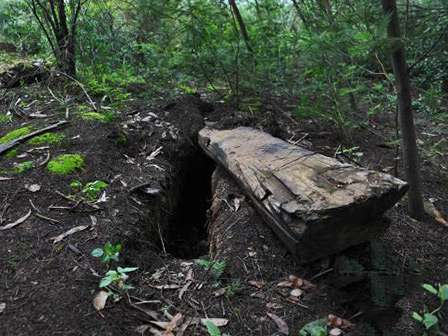 A public cemetery once maintained in honor of the Chinese soldiers and support staff who aided foreign airmen during World War II now sits disused and vandalized on the outskirts of Kunming. An article published August 13 by Kunming Information Hub (KIH) reports the cemetery is now filled with garbage and many of the graves have been opened and their headstones scattered around the grounds.

The graveyard is home to the remains of some 500 men who fought to supply and protect pilots of the Flying Tigers and the China National Aviation Corporation (CNAC) in Kunming during the Second World War. Today the place is all but abandoned, its grounds littered with beer bottles and plastic bags. Many of the cemetery's once-buried cedar coffins have been dug up and broken for use as firewood.

Hidden in the hilly forests in an area southeast of the city center called Changchun Mountain (长春山), the graveyard was completely unknown to KIH reporters. They quickly learned they needed to hire a guide to locate it. While on the phone with the Flying Tigers Research Council (飞虎队研究会会), reporters were told: "Very few people know where it is. We'll arrange someone to take you there, otherwise you will never find it."

When they did finally arrive, at night and in the rain, the reporters found piles of trash and evidence of several campsites. Twelve tombstones remained in good repair, but otherwise little was left but debris to mark the existence of a burial ground. In a gruesome aside, the journalists mention finding unearthed human bones visible around the area. 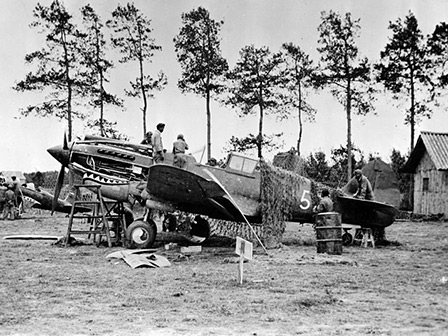 Maintenance on a Curtiss P-40 of the American Volunteer Group — aka "The Flying Tigers" — in Kunming, China, circa 1941.

During World War II a graveyard was created where Chinese volunteers were buried alongside 300 foreign servicemen. Shortly after the close of hostilities in World War II, the Americans and Europeans were disinterred and returned to their home countries. The cemetery was moved entirely in 1953 to make way for construction of a warehouse facility and relocated to its present-day site.

The social upheavals of the Cultural Revolution required family members of those buried in the graveyard to stop visiting. Any connection to countries considered enemies of China at the time — even from two decades earlier — was dangerous. The memorial fell into disrepair and was apparently forgotten.

Members of the Flying Tigers Research Council found the cemetery again in 2007 and the following year erected a monument marking its existence. Despite their publicity efforts and multiple promises by the Kunming government to restore the grounds, the graveyard has fallen further and further into decay.

I was at the site a few years ago, then it was a sparsely forrested hill surrounded by southern Kunming's growing construction. Apart from the Flying Tigers marker there were a number of newer Chinese tombs (the coffin part is more likely from one of the newer graves). Some people were up there for picnics, leaving the usual rubbish.

Finding the Flying Tigers marker set in 2008 is not too difficult. We took a taxi down to the old 贵昆路 to 普照村. Then with a little help from a local we turned east, crossed the railway line and scrambled up a dirt track to the top of the hill. There seemed to be better access from the other side.

A link to a map showing the location: www.yunnanexplorer.com/[...]

There isa good Chinese website out there "China Cultural Heritage" that makes media about destroyed historical heritage. Sometimes reports about, say, protected Tang Dynasty cemeteries that have been changed to garbage dumps.

Heres a story when a construction company "accidentally" destroyed the old Dali walls. Before the Ming walls, there were the the upper dragon pass and the lower dragon pass. Locals had these in high esteem, not to mention the historical significance. Once day they were accidentally torn with a bulldozer.

I was at the site in 2008; then known as "Puzhao Woods"... just happened upon an elderly couple who said they had been coming to pay familial respect since he cemetery was moved in the '50s. Before then hundreds of visitors had come to the site and it was always bedecked with floral arranements on holidays - mind you, this was during the Mao Regime days! My Chinese is very poor, but my wife, LiWei, translated what the couple said as: 'they no call these men Guomingdan, but Chinese Flying Tigers and all revere as such'.
What we found were 7 open or sunk-in graves, human bones amongst the tree and shrub roots; the single new marker and trash! No attempt had been made to otherwise designate or preserve a cemetery!

On a 1994 visit I found a stelle marking the area along the road from the old airport where the 1st. Squadron maintenance 'hangars in the woods' were in 1941 (until the airbase was finished with such edificies) and I have several B & W photos taken in those days; including te first actual work hangars and a P-40 named: YUNNAN WHORE soutside of one. We also visited what remained of Camp Scheil, he former Flying Tigers R & R area along the lake.
BTW - there is NO photo (to my knowledge) which shows the entire group of AVG (3 squadrons) of the Flying Tigers... however media continually use the photo seen in this article - which, other than the aircraft has no AVG airmen in it - this is the US Army Air Corps (after July 4th. 1942) who assumed the name by Chennault's choice; best known at the CATF or Chinese-American Task Force (Tiger jumping thru the Chinese Sunstar and shredding a Japanese 'meatball' flag). Only a handful (5 pilots & 23 crewman from the AVG's 311-member staff) joined the USAAC at the time with a couple American civilians who also remained employed. The CATF was an interim group formed around the 23rd. Fighter Group with Robert Scott their leader (GOD IS MY COPILOT fame) that lasted a mere 10-months until March 10. 1943 when Chennault first displayed the US 14th. Airforce emblem - most often synonymous with the "Flying Tigers". Today - it seems the name covers anyone (and anything) whichever flew the HUMP, or over any part of China between 1931 and 1949... ie: American Airlines conract pilots & crews; CNAC pilots & crews; CAT (China Air Transport) employees who evacuated 150,000 KMT families & China's Gold reserves to Taiwan, which then became "Air America" in the mid-'60s); the Russian pilots, crews and a few from Korea during 1938-'40; Indian Scouts, the US Airborne Cavalry who rode mules in China & Burma (yes - both parachuted) & anyone who 'flew' and landed via WACO gliders... the list is almost endless.
Today with an ever increasing number of so-called 'Flying Tiger museums' being built in China there is a real scramble for artifacts from the USA, because they came to America as 'souvenirs' and were closeted away many years while in China they were destroyed; crashed aircraft aluminum salvaged and beat into pots & pans, and some items were even buried, deliberately sunk in marshes & small lakes. etc!
Construction companies are continually building on former crushed stone and mud runways... and will do so untl there is no vistage of any WW II bases visible - photos are all that we shall ever have if war-dead cemeteries are forgotten... it's called: PROGRESS