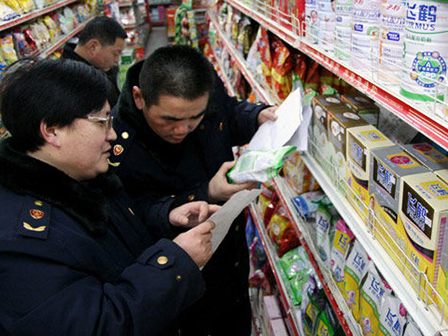 A food scare, once again with links to milk powder, is sweeping across the country. In reaction to growing public consternation, China halted milk powder imports from New Zealand and Australia over concerns of possible contamination while stores emptied their shelves of products manufactured by dairy giant Fonterra.

Worry began to mount in China over the weekend when New Zealand-based Fonterra announced it had sold whey protein that might contain a bacteria linked to food poisoning to distributors in five countries, including China. Fonterra produces roughly 30 percent of all dairy products exported across the globe, and last year accounted for the vast majority of China's nearly US$2 billion in milk powder imports.

Fonterra reportedly discovered the whey protein contamination in March of this year. However, it was unable to navigate its own logistics systems to pinpoint which products had been made with possibly dangerous ingredients.

Efforts to track down the cause of the contamination were compounded because the suspected culprit — the bacterium Clostridium — has 100 species, only five of which are harmful to humans. Of specific concern are the varieties of Clostridium that, when ingested, can cause food poisoning and botulism.

The company finally did identify the source and location of the contamination on July 31. It then released a press statement maintaining the 38 metric tons of tainted whey powder were under recall or used in food supplements whose manufacture would kill any dangerous bacteria.

Despite these reassurances, the Chinese public seem unconvinced of the company's trustworthiness. Fonterra's CEO, Theo Spierings, traveled to China to quell spiralling fears and issue a public apology. At a press conference, he tried to assure mainland consumers that industry recalls were under way and that all questionable products had been contained.

The Chinese public has grown increasingly distrustful of domestically-produced food since 2008, when 300,000 were poisoned and six infants killed by baby formula and milk containing melamine. Numerous other food scandals, including the reported shuttering of 250,000 illegal gutter oil factories, have further shaken the public's confidence regarding food safety. In the aftermath of scandals such as these, many had begun to rely on products made overseas.

Fears over the reliability of baby formula and milk powder had become so pronounced in mainland China that tourists to Hong Kong began hoarding foreign-made brands. Hong Kong ran low enough on milk powder that it enacted new laws concerning the purchase of such products. Visitors to the city found to be transporting more than 1.8 kilograms of formula into China can now face prison sentences and fines of up to 395,000 yuan.