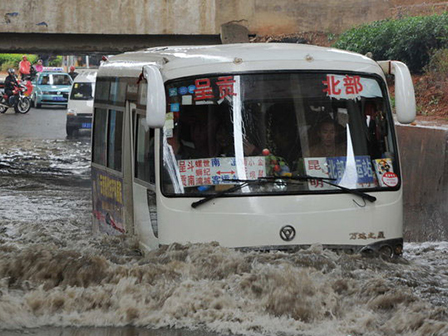 Recent floods in Kunming have come with serious consequences. These include property damage on a massive scale, ruined automobiles, extensive crop damage outside the city, as well as stagnant water and its attendant health risks.

There is at least one bright spot as well — some drought alleviation. Below is a sampling of what city officials and Spring City newspapers have been discussing in the aftermath of Kunming's worst flooding in years.

Is the drought over?

Unfortunately the most straightforward answer appears to be: 'not really'. Despite heavy rains in many of the areas that eventually drain through Kunming and into Dianchi Lake, local newspapers are still characterizing the city's water storage situation as "grim".

Over the past four years, that word has become common in local media when describing water levels in the major reservoirs supplying the city with water. Following the rains this summer, storage in Kunming's seven largest reservoirs now stands at 110 million cubic meters.

This figure may sound gigantic, but only represents a reported one-tenth of full capacity — underscoring just how intense the drought has been in Yunnan for more than four years. Officials are still requesting Spring City residents to do all they can to conserve water. 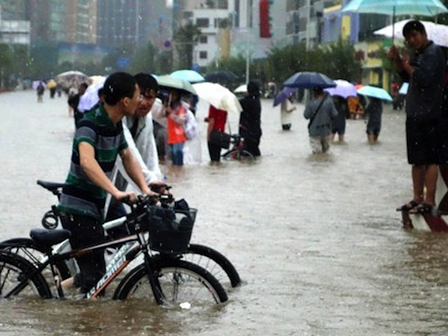 What can be done in the future?

There has been much public wringing of hands since flooding began on July 18. Some of it has been comical, such as the exhaustive historical review of Kunming flooding published by Yunnan Society.

The article, which chronicles Yunnan rain-related flooding from the Han Dynasty era until today, looks to glean lessons from the disasters of history. Longwindedness aside, the report is woefully short on helpful conclusions.

Perhaps more constructively, the city government has begun a fact-finding survey of the world's most efficient, and inefficient, sewer systems. Municipalities specifically singled out for emulation were Qingdao and its "German-built drainage system", Tokyo and London. Paris was also of special note because it has what at least one reporter has concluded is "the world's most prestigious sewer".

Provincial governor Li Jiheng (李纪恒) went on a tour of the city's more seriously damaged areas, including neighborhoods along Longquan Lu. He discussed the need for a more comprehensive disaster early warning system as well as a more extensive and effective urban drainage system. Li did not offer any details regarding such projects, but did call specifically on grass-roots organizations to come forward with any ideas.

Nationally, urban planners have been quoted by Xinhua as saying water drainage systems have largely been ignored during the country's decade long construction boom. In the same article China's State Council reportedly announced that over the next decade the government would work "[...] to build a more perfect urban water drainage engineering system."

Workers conducting clean-up efforts in Kunming have discovered nearly 400 vehicle license plates amidst piles of garbage. Police are having trouble explaining how so many cars lost their plates in the flood. Website Yunnan Society surmises the licenses were torn off when people attempted to drive their cars through flooded streets.

Similarly strange and unexplained are several explosions that occurred while much of Kunming was under water. At least nine manholes or sewer grates were reported to have exploded during flooding. Methane levels at each explosion site were elevated but firefighters on the scene explained they thought pipes clogged with trash leading to raised water pressure were to blame.

its funny how they would revert the matter of making modern sophisticated sewerage system, or german whatever design or neing efficient or not

bottomline pips, its as easy as declogging the sewerage at a certain time which is easily called maintenance projects

like example every year they fixed beijing road and all sorts of major roads even when its good, but nobody touches the so many years old drainage/sewerage system. im speculating here since we all saw the result.

Sounds like another good reason for the leaders to go on a junket. I must go and stay in Paris for 6 months to study their sewage systems! When I come back I will revolutionise the entire of Kunmings sewage systems! And my family must accompany me.

Another junket, to Paris!, yes. I like it. Oui oui, or should I say wee wee.
I doubt they can learn anything from Tokyo, due to selective hearing, and not wanting nippongineers under the city.

venice of the east!

The top picture is from last year by the way.

I'm returning to Kunming next Thursday. I'm staying at a hotel in Panlong, near the intersection of Renmin Lu and Dongfeng Dong Lu. How jacked up is that part of town? (Should I be delaying my return?)

What does jacked up mean? The floods have dried up anyway.

>>"I'm returning to Kunming next Thursday. I'm staying at a hotel in Panlong, near the intersection of Renmin Lu and Dongfeng Dong Lu."