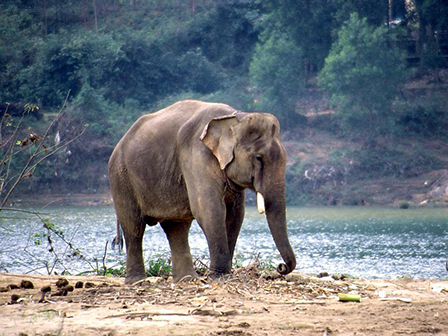 A woman in Xishuangbanna was killed earlier this week when she was trampled to death by a wild elephant. The situation highlights a growing problem in several places around Yunnan as wild animals are increasingly coming into violent contact with people in rural areas.

The incident occurred in Jingne Township (景讷乡), roughly 70 kilometers north of Jinghong (景洪). Three villagers had driven to an area where the day before their tractor had become mired in a muddy field. Upon their return an elephant emerged from a nearby pine forest and attacked them, according to media reports.

Two people managed to flee to safety. A third member of the group, a woman named Jin Baofeng (金保凤), was separated from her companions during the attack. Her body was later recovered in the forest after apparently being trampled to death by the elephant.

Following the woman's death, forestry officials identified a group of at least 14 elephants currently living in the area. The animals' movements are now being tracked in attempts to avoid more interactions with humans. This is the second elephant-related fatality in Xishuangbanna in the past eight months. In November 2012, a woman working in a watermelon field was similarly killed by a group of marauding elephants.

More than 250 kilometers northeast of where Jin was killed, a group of 25 elephants is also being closely monitored. Farmers in Jiangcheng County (江城县) in Pu'er have organized around the clock surveillance of a herd that has repeatedly destroyed crops in the area.

Wild elephants in Yunnan, taxonomically known as Elephas maximus indicus, are a relatively small population. It is estimated that fewer than 300 of the creatures live in the province, primarily in nature reserves. Smaller than their African relatives, Asian bull elephants can still weigh 5,000 kilograms.

As Yunnan continues to develop once-forested land, large animals are finding their habitats shrinking. In addition to increasing elephant incursions in the province's south, black bear encounters with humans in northeast Yunnan are also on the rise.

The problem is not the elephants. Sadly the authorities will see the opposite.

You're right, the elephants will be persecuted for a land use issue.

Back in the UK for a month. Humans, wildlife and the economics of business is alive and well here . The debate continues about culling badgers to help manage TB in cows. That stopped being a scientific study years ago, now its just gut reaction politics. But, get this... A gov. minister was prepared to authorise a cull of Buzzards ( largish hawk ) because one of his buddies who owns a vast estate and who breeds pheasants ( tasty chicken sized bird from china) told him the buzzards were eating the pheasant chicks.....A massive public protest ridiculed him and the idea was abandoned.
So, Yunnan's elephants? Does the WWF have an interest here ?