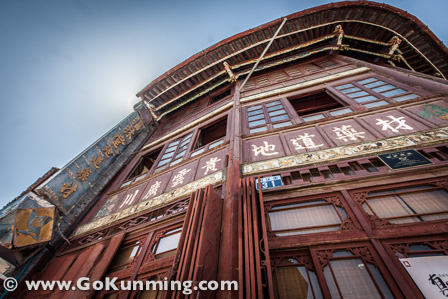 The history of a Yunnan institution

On a day 156 years ago an enterprising man named Li De (李德), along with his son Li Yuqing (李玉卿), opened what today would be called an apothecary. They supplied the people of Kunming with all manner of medicinal herbs, bark and other ingredients considered to be natural palliatives by practitioners of Traditional Chinese Medicine (TCM).

The Lis examined patients, wrote prescriptions and filled them on site. Eventually they settled on calling their shop Fulintang (福林堂), which roughly translates to English as "Blessed Forest Hall".

Today the store still exists in its original location at 31 Guanghua Lu (光华录), near the eastern end of Kunming's old Bird and Flower Market. It represents the inception of Yunnan's oldest pharmacy chain. In 2003 the edifice housing the Lis first Fulintang location was declared a "preserved historic building" by the Kunming government. 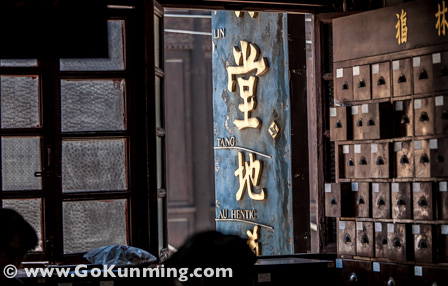 Upon opening, as store-sponsored lore would have it, the Lis turned no one away. People lacking enough money to pay were consulted in the same manner as everyone else. In return for their medicine, the indigent were asked to plant and tend to a small stand of apricot trees located in the pharmacy courtyard.

Signs and plaques placed conspicuously around the building's interior celebrate the pharmacy's benevolent and uninterrupted history. According to a rather cagey staff, Fulintang remained open through the collapse of China's dynastic system, a civil war, revolutions and the catastrophic upheavals of World War Two.

Today Fulintang has strayed a bit from those charitable beginnings. It is a publicly listed company with hundreds of employees and more than 100 locations sprinkled around China.

Medicine is no longer free to the poor and the apricot grove has long since disappeared. Some of the medicine for sale today is quite expensive, in fact, prohibitively so. The most numerous packaged item in the store is perhaps cordyceps, which are highly valued as both an aphrodisiac and as a palliative for cancer. Collected in the highlands of Tibet, some packages of this caterpillar fungus were selling at a price of 7,600 yuan (US$1,225) for 30 grams. 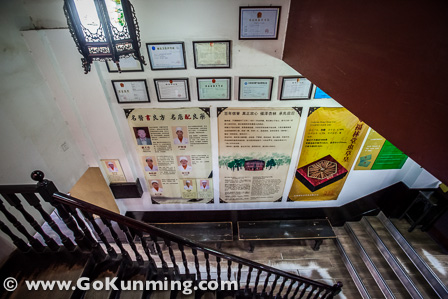 Fulintang sits at the intersection Guanghua Lu and an alley called Wenming Jie (文明街). The storefront curves gently around the corner and is covered in multilingual signs. At some point the shop was refurbished with all types of different building materials. Most of the facade is old and faded wood, but in places timber gives way to concrete, steel and sometimes marble. It is all a bit of a mishmash.

Inside the front door is a display area where many types of Chinese herbs, teas, fungus and caterpillars are displayed. These are not sold loose, but pre-packaged and clearly priced. Through a small hallway covered in store promotional materials, modern medicine is sold from glass counters tended by an extremely bored looking woman. Apparently people do not visit apothecaries to buy Aspirin.

But people have been coming, and continue to come, in droves. Fulintang's floors are lacquered, but where foot traffic is highest the varnish has been worn down to bare wood. The exposed flooring has in turn been polished smooth by decades of customers and tourist coming and going. 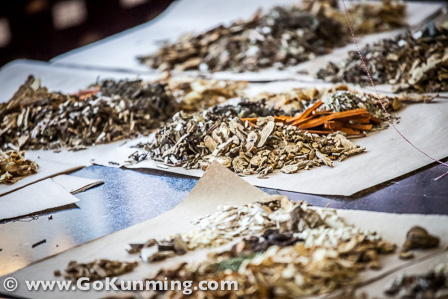 Up a set of stairs bearing the same marks as the floors, the smells of Chinese medicine permeate everything. It is a distinct odor, at once musty and pungent, laced with hints of sweetness and licorice. Once through a doorway the source of these mingling scents becomes readily apparent.

Across a wide counter is a sorting table. The day we visited, four workers were busily filling prescriptions. Behind and beside the workers were row upon row of drawers. Each one contains its own dried ingredient and is neatly marked in handwritten characters. 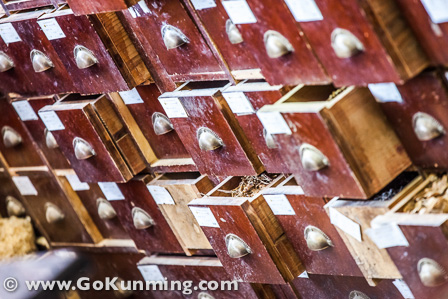 Traditional Chinese Medicine draws on a seemingly endless panoply of components, thus the need for so many drawers. Ingredients range from stems, leaves and bark to rhizomes, flowers, tubers, nuts, insects, animal organs and animal extremities.

When filling a prescription, a quantity of each necessary ingredient — referred to as 'medicinals' — is selected from the proper drawer, weighed on an old balance scale and deposited with other components onto a waiting piece of parchment paper. Once filled, the paper is bundled up and each package is neatly tied with a bow. Powders are similarly wrapped in smaller, individual sachets. 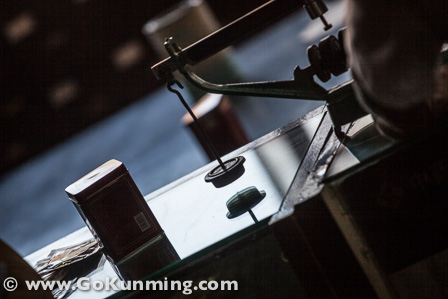 A balance scale for weighing medicinals

When the pharmacy opened in the mid-1800s, a host of other medicinals would have been available at Fulintang. According to a 2006 survey of ancient Chinese medical writings, 12,800 types of medicinals have been identified and combined into more than 100,000 recipes. Many of these constituents have been outlawed over time, largely due to species endangerment not necessarily linked to TCM.

The haste and complexity of the prescription filling process was evident when we visited as dozens of drawers sat half open, their contents sometimes spilling onto the floor. Inside the yawning drawers we could spot leaves, lichen, powders and mosses all in varying sizes and colors. We watched as the pharmacists filled one order after another while customers waited patiently on old wooden chairs. 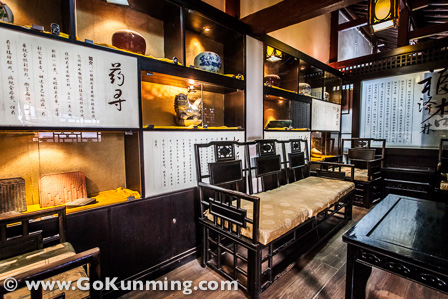 Across the landing where the stairs reach the second floor is the apothecary consultation area. Here too there are only hardback wooden chairs. Behind them, in glass cases lining the walls, apothecary tools from bygone eras are displayed. Behind the seating area are two small offices where patient consultations and diagnoses are still performed by TCM doctors.

Fulintang sits in the area of Kunming known as the Bird and Flower Market. The quarter has been under perpetual construction for the past six years and looks to be remade in the manner of Dali's Yangren Jie. But the pharmacy's presence amidst all this renovation is a fantastic reminder of why historic preservation, as opposed to modern recreation, is so often preferable. 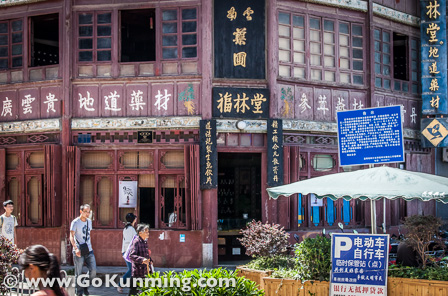 This is an extremely interesting building. I took quite a few photos of it in 2004. When the Bird and Flower market was being renovated I got past the barricades to take photos. I was really surprised to see this was one of the preserved buildings as the corner location would be great for a McD's, not!

Took several photos in April 2009 with the streets torn up around this grand building. I am glad to see it still standing. In Beijing, everything is laid to waste in the interest of money. At least Kunming is saving a bit of the past.

Believe it or not, this store is still standing in all its quaint glory! Granted most of 福林堂's neighbors around the Old Street area have had a major face lift.

@bilingualexpat Good to hear. This is great old building. I hope no one gets greedy enough to tear it down. 不拆！