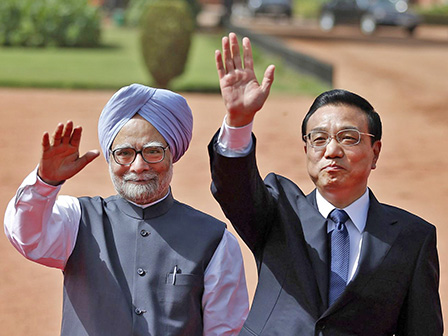 When Chinese Premier Li Keqiang (李克强) met with Indian Prime Minister Manmohan Singh last month, the two had much to talk about. The dust was still settling from a border standoff high up in the Himalaya Mountains and threatened to overshadow what was originally expected to be a constructive meeting about economic and political cooperation.

Rather than being sidetracked, the two leaders discussed the long-envisioned and clumsily named Bangladesh, China, India, and Myanmar Forum for Regional Cooperation — or BCIM — trade corridor. A recent editorial by Yunnan University professor of International Studies Bi Shihong (毕世鸿) argues that the corridor will be essential in boosting regional economies while simultaneously enhancing stability in the region.

Discussions of multilateral trade agreements and increased connectivity have been carried out on a non-governmental basis between these four countries for the last 11 years. Other than annual meetings and the occasional car rally, progress has been relatively slow. The China-South Asia Expo is an opportunity for all sides to make concrete headway.

Li's visit to India in May was the first time high-ranking politicians from the two countries have met to discuss the trade corridor. The meeting gave rise to hopes that both Beijing and New Delhi are preparing to act on proposals that would potentially send billions of dollars in trade to Yunnan.

In his editorial, Bi argues that further cooperation in logistics would lead to rising living stadards for the millions living and working along new BCIM trade routes:

Recent proposals for a trade corridor have stressed 'multimodal' systems — or transportation of goods using more than one type of vehicle. Instead of building an overland highway to facilitate trade, there are now discussions of utilizing the Bangladeshi ports of Chittagong and Mongla — both located on the Ganges Delta — as well as increasing air freight routes between BCIM nations.

Barriers to a trade agreement such as this still remain. They include China and India's historic mistrust, ongoing civil wars in Myanmar and a lack of cohesive region-wide infrastructure. However, hopes are high for many in the business world that the four countries can hammer out an agreement while Kunming hosts the Expo this weekend.