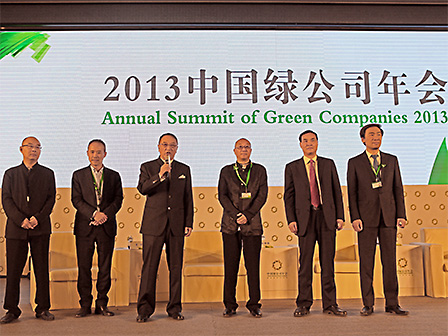 Two Chinese business leaders meeting in Kunming used a sustainable development conference as a platform to call for reform this week. Showing either a newfound confidence or an acute lack of tact, two of China's wealthiest men told news outlet CNBC that the mainland business environment was in need of less government control.

Both men told interviewers China's giant state-owned companies have first, and sometimes exclusive, access to the country's resources. They argued that the current system thus inhibits growth in the private sector, which in turn stymies innovation. Huang explained his thinking during the interview:

We've lost a lot of valuable resources, and also we've lost a lot of the momentum that we had. Before, we had open markets and entrepreneurship and that's what helped China succeed. We have to go back to market forces as well as fight corruption.

Huang was contrasting the previous administration's approach to public and private enterprises with the new anti-corruption and increased transparency policies of President Xi Jinping (习近平). Perhaps most surprising were Huang's comments regarding the business policies of the previous leadership group. Those comments come just five months after China's power handover. "Now that there's a new government in place I can finally say that the last ten years have been very bad for the economy," Huang said.

Legend Holding's Liu, who is expanding his presence into the world equity market, echoed Huang's comments. Liu however, was a bit more guarded than his colleague:

My view is that the Chinese government should adopt a more systematic and comprehensive approach when it comes to reform...That way the government can push through more social and political reforms that can be the basis of further economic reforms.

For its part, CNBC has repeatedly said private sector Chinese entrepreneurs feel they have just experienced a "lost decade". The phrase was not actually uttered by either of the men interviewed and may seem a bit preposterous in light of the country possessing the fastest growing economy in the world for more than ten years. However, Huang's comments do appear to show a newfound fondness for candor as well as a feeling that the business climate in China may be changing.

This is not the first time Huang has been at the center of a controversy. For the past two years he has been attempting to buy 300 square kilometers of land in Iceland — or roughly 0.3 percent of the entire country. He has been derided in the Icelandic press as being the next Dr No, a James Bond villain bent on world domination.

News flash - business men call for less government control! Although in China's case, they might be right!

I though the foreign businesses big and small were the only ones complaining about an uneven playing field...

how i wish i could know how this men acquired all that wealth and be able to muster that much growth.

Shoei, as with virtually all of the newly rich Chinese, they acquired their wealth through theft, corruption of government officials, exploitation of land "redevelopment" and the completely insolvent Chinese banking system. There is no way that a country could legitimately produce billionaires in approximately one generation going from full state ownership to private business without a great deal (or perhaps, exclusively) criminal activity.

And why do you want to be a billionaire, Shoei? To horde everything for yourself?

ahmet, could be loopholes on the system. true and also havent heard of their IRS claiming or investigating things

abcd, i always wanted to be one but i just dont know how. reason for it because i wanted a good source of funding for my philanthropy works and also giving to certain foundations and helping the poor.

well if your a billionaire certainly you have the means, the power, the authority to a certain extent. your presence will surely be felt.

Shoei, if you don't know how to become a billionaire, it's because it's virtually impossible. The odds are stacked against you. You have about the same probability of being struck by lightning twice in the same day. Most or all of these people are born into great wealth/power to begin with. And what Ahmet said. So I wouldn't lose too much sleep over it.

Well lets have a little look, the west is mega screwed up with elite families controlling the countries through private industry & groups. So perhaps China wants to keep a government in control of it's fate & not western styled governance from banks & private industry that would crawl all over China. China is booming,the west is dying, fact, why would they want to change to our style? Are they crazy!, I think not. So the Chinese are very clever, they are even implementing their own world currency to challenge the dollar with 180 countries signed up to the BRICS.Well the eye didn't see that coming! LOL!

Well China is a developing country and you with obviously a TV brainwashed western mind just focus on a straight comparison. Let's have a look, China has the most successful economy by far.They will be number 1 in the world if they did not devalue their currency on purpose. Left to western control it would have boomed and bust many times. China to put in perspective, let's compare to the UK. Hmm OK, 60 million people in the UK, flat country that is an island. Hmm let's look at China 1.4 billion people, just ONE province is bigger than the UK Yunnan, also 45 million people in Yunnan alone. The province has far more challenging landscape and is bordered by many countries. Hmm me thinks China has much MUCH more things to develop than the west in many sense. So let's see, oh China's middle class far out numbers the whole of the USA & the UK. So relatively speaking erm, I think they are by far more successful than us! Also,their climate, natural disasters, diverse ethnic groups and bordering with many countries (Such as past wars and diplomacy) tend to cause difficulty. Again, China has many rural plans where they are re-building entire villages and giving free meals and schools to farmers, the ones in need. So, compared to the UK they have far FAR more wealthy and successful people and they are spreading the wealth. Though the UK just keeps the elite wealthy families rich & the poor are getting poorer, though how wealthy the elite families are is cleverly hidden in organisations they control. So yeah still think China is better.

www.china.org.cn/business/2011-07/22/content_23048823.htm
Unnatural deaths claimed the lives of 72 Chinese billionaires since 2003.
The report, based on a survey of public records, said of the 72 billionaires, 15 were murdered, 17 committed suicide, seven died in accidents, 14 received death sentences and 19 died from disease.

I wonder on a list of the top 1000 wealthiest people in China how many of them are now foreign citizens?

yeah, it's a shame. they could use that money to improve things here.

by the way, shoei, i think i recall reading that something like half of the billionaires are real estate tycoons.